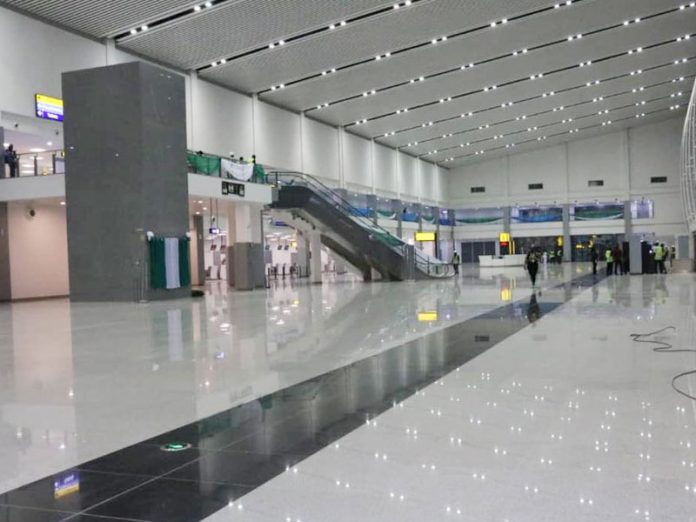 While unveiling the terminal, Buhari said the federal government was developing Nigeria into a regional air transportation hub and the country was assuming its leadership in the aviation sub-sector in Africa.

He noted that the new terminal was the first to be connected to rail transport system in the country and indeed in the region, providing airport users with a choice in the mode of transport to and from the city centre.

He said the government was gradually closing the infrastructure deficit bedevilling the country.

Also, the Minister of State, Aviation, Hadi Sirika, said the newly commissioned terminal had the capacity to process 15 million passengers annually and covered a space of approximately 56,000m2. It also has 72 check-in counters, five baggage collection carousels, 28 immigration desks at arrival and 16 at departure.

Other facilities include eight security screening points, eight-passenger boarding bridges, walkway to link the FCT metro rail and additional apron for remote parking of aircraft, among others, that were designed and laid out in accordance with modern requirements for airport operations.

Sirika urged the President to intervene in the payment of counterpart fund owed to the China Exim Bank so that the CCECC could complete the second phase of the airport remodelling exercise, which include the provision of additional facilities that would enhance airport efficiency.

The Managing Director of the Federal Airport Authority of Nigeria (FAAN), Saleh Dunoma, told aviation correspondents that the new terminal would be used for international flights, while the old one would be used for domestic flights.

Incidentally, none of the new airport terminals unveiled was put into use immediately. The one at the Port Harcourt airport, THISDAY gathered, still has a lot of work to be done to make it ready for passenger facilitation. That raised the question among stakeholders why the President should open the terminal that was not ready?

But the General Manager, Corporate Affairs of FAAN, Mrs. Henrietta Yakubu, told THISDAY that from mid-January 2019 the facility would be opened for the processing of passengers on international destinations.

“We know that Ethiopia Airlines, British Airways, Arik Air and Air Peace will use the new terminal to process their passengers for overseas destinations.

Ethiopia Airlines has given us their words. You know they always support us in whatever we are doing,” she said.

Yakubu, who said she did not have any information on the maintenance of the facilities after construction, expressed optimism that FAAAN would ensure that the terminals were kept to standards when they go on stream.

About two years ago, Sirika raised an alarm over the structural deficiencies with the terminal in Lagos and Abuja, which include lack of proper sewage, small apron hangar and inadequate power and water capacity.

The minister also said the terminal in Abuja had no link to the old structure, no apron space provided.

The little one that is available is obscured by the fire service. And the control tower at the Murtala Muhammed International Airport (MMIA), Lagos cannot see the apron of the new terminal due to the location of the structure.

Many industry observers are of the view that without maintenance policy, the new terminals being unveiled would eventually fall back to the old system, become dilapidated; unless government carries out its plan to concession the airports or give FAAN autonomy status so that it would be run like a corporate organisation without interference from the government.

Many Nigerians, who were downbeat when Ghana inaugurated its new terminal at Kotoka International Airport, Accra, were excited when the federal government unveiled the Port Harcourt and Abuja airport terminals. But insiders are of the view that the state of the art facilities was incorporated in the Accra airport terminal with modern technologies on Immigration service, check-in system, baggaging and others.

THISDAY found out last Sunday that the new terminal at the Kotoka airport had seven avio bridges and 14 fingers with large apron space where flights could park and board passengers. The Abuja new terminal, though a large edifice, is shrunk in a small space that allowed only two avio bridges on one side with four fingers.

Despite the commissioning of the two terminals, some industry stakeholders insist that the Murtala Muhammed Domestic Terminal, known as MMA2 is still the best terminal in Nigeria in terms of functionality, 11 years after it was put into use.

The new Port Harcourt International Airport Terminal, the Abuja terminal was built by CCECC Nigeria Limited at the contract sum of about $111, 168, 752.55 and according to CCECC, 85 per cent of the contract sum came from the Export-Import Bank of China “as a concessional loan”, while 15 per cent of the amount came as the counterpart funding from the government of Nigeria.

The contract was signed on December 3, 2012 “but large-scale construction” commenced in Abuja and Lagos terminals in early 2015.

The minister, who was obviously piqued by the celebration of Accra airport new terminal opened recently by Nigerians, observed that many Nigerians had taken to the social media to celebrate the new terminal at the Kotoka International Airport, Accra, Ghana, but they did not know that the country has better airport terminal facilities in Port Harcourt, Kano, Abuja and Lagos.

He, however, stressed that despite the building of the four facilities and an additional one at the Akanu Ibiam International Airport, Enugu, the government had realised that it could not efficiently build and manage airport infrastructure, hence the decision to concession them.

But industry experts are curious about how the government would concession the airports while they already have a concessionary agreement with the Chinese, who are expected to manage the new terminals and recoup their investment on the projects.