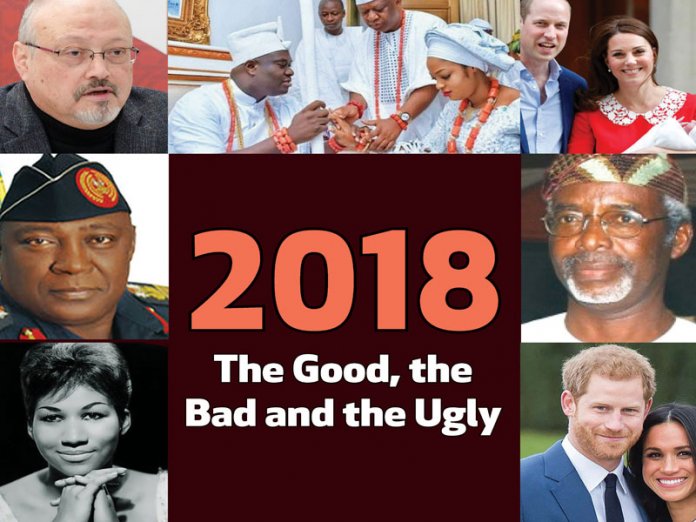 Dream, excitement, ambition, fulfillment and the final word, death, are some of the words that have described the year 2018 as it enters its last day on December 31, tomorrow. As life’s a stage, Funke Olaode, in this piece, reflects on the personalities – dead or alive – who have shaped 2018 as the year draws to an end. The list is by no means exhaustive, however, it parades the good, the bad and the ugly of 2018

They shook the entire world with their romance as doubting Thomases were placing bets on the relationship as one of those flings. One is a royalty and the other, a divorcee -an American with an African-American heritage. Indeed, it was a relationship that broke royal protocol of 350 years. Against all odds, Prince Harry’s relationship with Meghan Markle, an American actress best known for her role in the Canadian-American legal-drama television series, Suits, was officially acknowledged on November 8, 2016, when a statement was released from the royal family’s communications secretary addressing the “wave of abuse and harassment” directed toward Markle.  A year after, on November 27, 2017 to be precise, Clarence House announced that Prince Harry would marry Markle in the spring of 2018. And on May 19, the marriage was sealed at George Chapel in Windsor, England and watched by billions of people across the world.  The couple announced that they are expecting their first child in spring of 2019.  As the  world looks forward to royal baby due in Spring of 2019, no doubt Harry and Megan are one of the most powerful personalities that shaped our world in this outgoing 2018.

Today, she is being referred to as a billionaire and one of the most successful bloggers in Africa. Linda Ikeji debut as a model while pursuing her undergraduate study at the University of Lagos. She has since conquered her world as a successful media mogul and top blogger, raking millions of Naira in her exploits. Though in the public glare, Linda drew the entire world deeper into her private life early this year when she got pregnant outside wedlock and the rumoured engagement to a mystery man. For someone who has always emphasised a life of celibacy, she received a lot of criticisms. Linda has since put that behind her as she welcomed her first baby on September 17. She later confirmed that the billionaire oil magnate, Sholaye Jeremi, was the father of her boy.  Though the duo has since gone their separate ways, 2018 has been a year of blessing as she became a mother. The baby’s dedication paraded who-is-who in Nigeria, including the Peoples Democratic Party’s presidential candidate’s running mate, Peter Obi, among other dignitaries.

After two failed marriages, first to Olori Adebunkola and then Zaynab, His Royal Majesty, Oba Adeyeye Enitan Ogunwusi shocked naysayers when the news of his new royal bride, Olori Moronkeji Naomi Silekunola Ogunwusi from Akure surfaced.  It came as a shock to many who didn’t have any clue of their relationship. To quench the fire of rumour, the monarch also took to social media and wrote: “I waited patiently upon the Almighty, the King of kings; he eventually did it in the midst of many trials. Shilekunola, Moronkeji, Naomi; the greatest arsenal you can apply on this highly revered throne with many rules and regulations in the midst of undiluted tradition, heritage and culture is the ‘Fear of God In You’. It is the beginning of your wisdom on this throne of Oduduwa. You are welcome home my beautiful and adorable queen.”  His royal majesty is currently enjoy marital blissful with the 25 year old damsel.

She is a young tennis player who put an end to two decades of Serena Williams’ dominance in the tennis court. Naomi Osaka, a Japanese-born US-based tennis player took the tennis by storm during US Open in New York from August 27 to September 9. Naomi Osaka won the US Open after an angry Serena Williams accused the umpire of being a “thief” in some of the most dramatic scenes at a Grand Slam final.

Williams was given a game penalty for her outburst, which followed racket smashing and another code violation as Osaka won 6-2 6-4 in New York. Osaka, 20, kept her focus to become the first Japanese to win a Grand Slam. The American, 36, graciously congratulated Osaka at the net after the 20th seed completed an extraordinary victory and, although Williams’ behaviour will grab the attention, nothing should detract from a classy and composed display from Osaka at Flushing Meadows.

He was a public figure and once referred to as the most powerful man in the world. The curtain fell on H.W. George Bush, the 41st American president who died early December, months after his wife of over 70 years passed away. The former American president and father to both President George Bush and former presidential candidate Jeb Bush was hospitalized on and off after his wife Barbara’s funeral in April. Over the past few years, the former president had suffered several intense medical predicaments, including pneumonia, bronchitis, and a broken neck bone. In 2017, Bush was hospitalized after contracting pneumonia while already suffering vascular Parkinsonism. He was given a state funeral that spanned almost one week from his home state of Houston, Texas and Washington DC.  His funeral drew world leaders across the globe and watched by millions globally.

In what could be termed as occupational hazard the world woke up October 2, to the news of disappearance of Jamal Khashoggi, a Saudi dissident, journalist for The Washington Post and former general manager and editor-in-chief of Al-Arab News Channel after entering  Saudi consulate in Istanbul, Turkey. Khashoggi had entered the consulate in order to obtain documents related to the marriage he and his fiancée were planning. Because no security camera footage of him exiting the building could be found, he was declared a missing person amid news reports claiming that he was assassinated and dismembered inside the consulate. When the disappearance of Khashoggi was first reported by the news media, Saudi Arabia claimed he had left the consulate and denied having any knowledge about his fate. Turkish media published evidence suggesting that Khashoggi never came out of the consulate. Saudi Arabia subsequently denied any involvement in his disappearance. Government officials of several countries, including Saudi Arabia, Turkey, the United Kingdom, France, and Germany, believe Khashoggi was murdered. Turkey in particular believes it was premeditated murder and anonymous Saudi officials have admitted that agents affiliated with the Saudi government killed him. Almost three months after his disappearance, the exact cause of his death is unknown since his body has never been located or examined. Kashoggi’s unresolved murder remains one of the incidents that shaped 2018.

She dazzled the world with her captivating and enchanting voice with soulful music. Her always eclectic and excellent performances earned her the sobriquet, ‘Queen of Soul’. But the beat stopped for Aretha Franklin, American singer, songwriter, civil rights activist, actress and pianist who ruled the world of music and left indelible marks on music. The queen of music bade the world farewell in August 16 after a long battle with pancreatic cancer.  Her funeral in her home state of Detroit, Michigan drew who is who in entertainment, religious community and world leader including former President Bill Clinton. The world will not forget the ‘You make me feel like a natural woman’ crooner in hurry.

He was a renowned medical doctor whose activities as founder of the Oodua People’s Congress (OPC) would later overshadow his early calling as a medical doctor. The OPC boss breathed his last in December after a prolonged battle with diabetes at the age of 83.

As the most respected monarch in the world, any news coming from the stable of the British monarch, Queen Elizabeth II, always sends excitements to royal admirers. After their royal weeding of April 29, 2011 which was watched by billions across the globe, and arrival of Prince George and Princess Charlotte, the royal watcher was delighted when it was announced that the Duke and Duchess of Cambridge, Prince Williams and Kate Middleton will be welcoming their third child. Apart from the queen herself who has four children, her offspring – from Prince Charles to Prince Edward have two children. With the arrival of Prince Louis in April, onlookers believe Kate must be following in her mother-in-law’s footstep. Will the world welcome royal baby number four in the nearest future? Time will tell.

The former Chief of Defence Staff, Alex Badeh, was not just an ordinary man. He was once sat atop the security of the nation under former president Jonathan. In what could be termed an irony of life, the former top security chief was killed along Abuja-Keffi road on December 18 while returning from his farm. Considering unresolved high profile murders in the past, the question remains: would the federal government fish out Badeh’s killers?

Les Moonves, the former boss of CBS, will not receive a $120m (£95m) severance package after an inquiry into alleged sexual misconduct. The US broadcaster said that he misled the company over the allegations and failed to work with investigators, meaning it had grounds to fire him.

Moonves stepped down in September following fresh claims he had sexually harassed or assaulted six more women. He said that the accusations made in The New Yorker magazine were untrue. In a statement, CBS said Moonves had displayed “wilful and material misfeasance” and failed to cooperate fully with the company’s investigation into the allegations against him. It also said he had had violated company policy and was in breach of his employment contract and as a consequence he would not receive any severance payment from CBS. At the time of Moonves’ departure as chairman and chief executive at CBS, where he had worked for 23 years, the company said it had set $120m aside as a possible payment to him pending an investigation.

From politics to entertainment and financial sector, 2018 will remain evergreen. In politics, after seemingly foot-dragging, President Buhari finally threw his hat in the ring seeking reelection. He has a nemesis in former Vice-President Atiku Abubakar.

The banking sector witnessed a tsunami as Skye Bank became  Polaris Bank under new ownership  while Diamond Bank was acquired by Access Bank.

The entertainment industry flourished under the likes of Wizkid (international collaboration) and David Adeleke aka Davido (ruled the entertainment world from January to December).