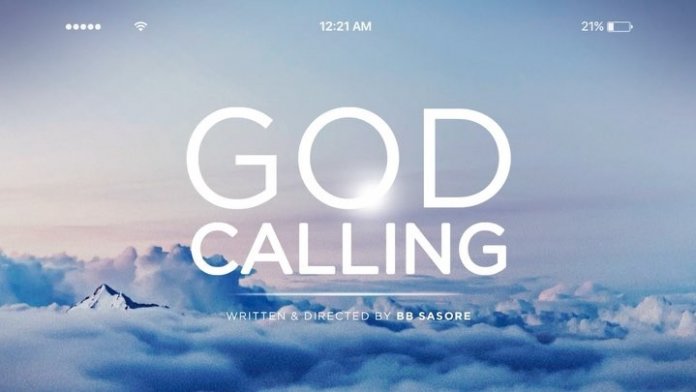 Preceding its cinema entry nationwide with over 10 million views of its teaser since its release in November, as well as a feature on CNN African Voices, make ‘God Calling’ the movie to watch this holiday season, writes Ferdinand Ekechukwu

For many ardent watchers of Nollywood films, faith based genre is not a regular item to be found on the movie menu. Reason being it’s element of preachy substance that leaves such production oftentimes drab. So one can imagine the excitement that accompanies the teaser and then the trailer of ‘God Calling’, making it one of the last seven movies released in the month of December, including Heaven on My Mind, Chief Daddy, Power of 1, Kasala, Knockout Blessing and Up North.

The teaser, which was released in November, garnered over 10 million views from several countries, as well as, a feature on CNN African Voices as one of the movies to look forward to during the Yuletide celebrations. God Calling chronicles the life of Sade (the central character played by Zainab Balogun) who suffers a personal tragedy of drug addiction and spiritually taken on a journey of self-discovery and faith, which transforms the lives of those around her.

God Calling shines a spotlight on modern-day spirituality by imaginatively exploring what it might look like for Abraham or Prophet Elijah to be Nigerian in 2018, and have to contend with disbelief as well as modern-day realities such as smartphones, and social media in what it would look like should your caller ID say, ‘God Calling’ and sets you on an roller coaster of what to expect from the movie. From the stable of Hearts in Motion Studios, God Calling explores faith, hope, healing, and hearing from God; it made cinema entry nationwide penultimate Friday.

At a time when the moral and ethical standards of our society are being heavily influenced by entertainment and the church is seen to be struggling to be part of the conversation among young people, the inspirational movie looks at family and faith through the lens of an unconventional encounter with God in this modern age. Written and directed by Bodurin ‘BB’ Sasore, who is known for his works Before 30, the television series about the pressures of marriage especial for women and the supernatural, farcical comedy Banana Island Ghost, one of the biggest Nollywood movies of 2017.

Just a little about the lead actress, Zainab Balogun, a British-Nigerian model, actress and television presenter, is having it all good acting and winning fans since making major expose in the Wedding Party movies and then in Royal Hibiscus.

Sasore revealed that for the film project to come into fruition, he had to collaborate with like minds who believe the Nigerian film industry remains a dominant player within the arts and entertainment sector and needs to be increasingly supported as one of the country’s largest non-oil exports. With a long list of seventy crew members, the production has the backing of executive producers – Ibukun Awosika, Derin Adeyokunnu, Yomi Jemibewon, Patricia Jemibewon, Uzo Nwagwu, Chijioke Uwaegbute, Karibi Fubara, ZeeZee Ihe-Okuneye, Olalekan Olude, Opeyemi Awoyemi, Dolapo Awosika, Enyi Omeruah, and Chioma ‘Chigul’ Omeruah.

On his inspiration for the movie, the filmmaker considered how the world is looking to our continent for original stories, and how the Bible is filled with the most original stories that we each experience in our own way every day. “It led me to think of how religion would adapt to time and geography, and this is what birthed God Calling. I think our film industry has so much potential but lacks the infrastructure and resources to compete globally. I believe the faith-based genre could do for Nollywood what martial arts did for Oriental Asia, or romance did for India.”

Further on the nature of faith-based stories, the movie cost, cast and crew members, of God Calling, Sasore explains: “At Nemsia Films, we decided that the faith-based genre was one we wanted to work in as it seemed underserved – at least on this scale (cinema, big budget, big actors, etc). We started Heart in Motion (HIM) Pictures so we could effectively create infrastructure and content for this genre. The next task was coming up with a project that would be unapologetically faith-based, but have a broad appeal.

“In developing ‘God Calling’ I thought about the reality of purpose in every person’s life. It made me think of the prophets in the Bible and what a modern day Elijah or Abraham would look like. What if she was a woman? What if she lived in Lagos? What if God used modern day technology to talk to her? And here we are. People are passionate about religion, and Nigerians are no exception. You might argue that we are even more passionate. This means there is slight level of faith, inspiration, redemption, etc to our storytelling.

“We are a little less nuanced about good and evil, and we don’t love grey areas. There indeed are others who have made many faith-based films over the past few decades, and they have become an institution in the space. However, ‘God Calling’ is on a scale larger than any the industry has seen so far. Basically all of pre- production, between writing five drafts of the script, full casting, location scouting, VFX underwater & green-screen tests, etc all took just under four months.

“Working with the veterans was completely unexplainable. You go in with expectations based on who you think they are and what they will bring to the set, and then you realise you are nowhere close. I was especially fortunate to have the most gracious actors on set, even with the biggest stars. RMD was always early, sometimes arriving even before crew. Onyeka Onwenu was the most pleasant woman ever.

“A true ‘mother hen’, she gave the entire crew gifts on her last day. Nkem Owoh is a special talent; he knew everyone’s lines and would give you variations of every choice in each scene. Tina Mba I have worked with on all my productions, and she’s an amazing actress.

They all worked with me on their choices and took direction which was so inspiring. They were actually very vibrant, and as much fun as some of the younger actors!”