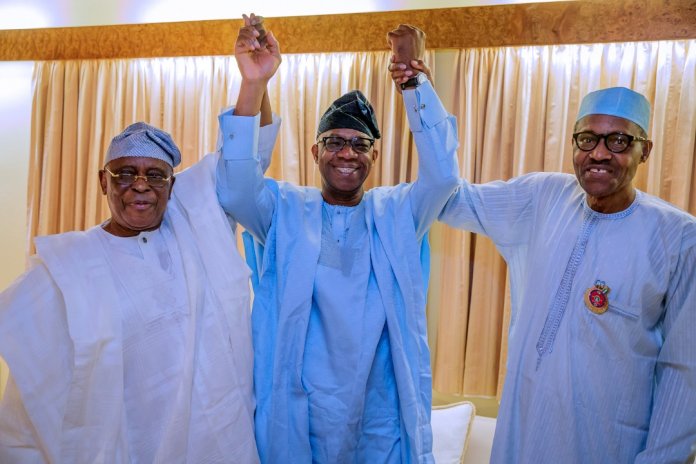 Speaking to State House correspondents after the meeting, Osoba disclosed that the president used the opportunity to endorse Dapo Abiodun as the Ogun state APC gubernatorial candidate in the forthcoming general elections in 2019.

He added that the president pledged to personally visit Ogun state where he would formally present Abiodun to the people of the state as the party’s gubernatorial candidate in the general elections.

“He assured us that he will personally come to Ogun state to formally present Prince Dapo Abiodun as his candidate.

“He assured that he is clearing the air of any ambiguity whatsoever of any name dropping; any blackmail; any misinformation that anybody maybe peddling, and that all elections throughout Nigeria, not just in Ogun state, people should vote for APC and no other party.

“That is the message that the President gave to us,’’ he said.

Osoba revealed that he used the opportunity of the meeting to present his autobiography to the president, saying the book would be launched after getting a date from the president.

He said: “I also seized the opportunity to present my autobiography which I’m going to launch if the President gives me a date.

“In this book, I reminded him of the letter he wrote to me on June 12, 1984 when he appointed me as Managing Director of the Daily Times.

“So, I presented the book to him. In the book I showed the judgment in 2003 when he won the election in Ogun state even when he was not the president.

In his remarks, Abiodun said he was elated with the President’s personal endorsement, saying that all those in other political parties campaigning with Buhari’s name and pictures should desist forthwith.

The APC gubernatorial candidate, who won the APC party primaries in Ogun against the wish of the state governor, Ibukunle Amosun, declared that he and the APC were sure of coasting to victory in the 2019 poll.

“I think that affirmation could not have come at a better time when there are a lot of ambiguities, when people have attempted to spread falsehood and all manner of misinformation.

“So, I’m very elated and very reassured that our president has stood by the party and has stood by me and I believe this matter will finally be put to rest and all those that are trying to gain by using the president’s picture on their posters and on their vehicles would finally begin to remove it.

“This is because it’s actually illegal for you to be putting the presidential candidate of another party on the face of the poster of another party, is an attempt to confuse and misinform the public.

“I believe after today, everybody will know that in Ogun state the only party to vote for is APC, from Presidential election to Gubernatorial to Senatorial to House of Representatives and to House of Assembly will be APC all the way,’’ he said.

Amosun had on Dec. 24 met with President Buhari at the State House where he presented a letter formally adopting him as the presidential candidate of the Allied Peoples Movement (APM).

The governor was accompanied by the national chairman of the APM, Yusuf Dantalle.

Amosun’s ‘consensus’ candidates for the governorship election and state assembly elections are contesting under the banner of APM.

But, the governor is contesting for the Ogun central senatorial seat as a candidate of the All Progressives Congress.(NAN)