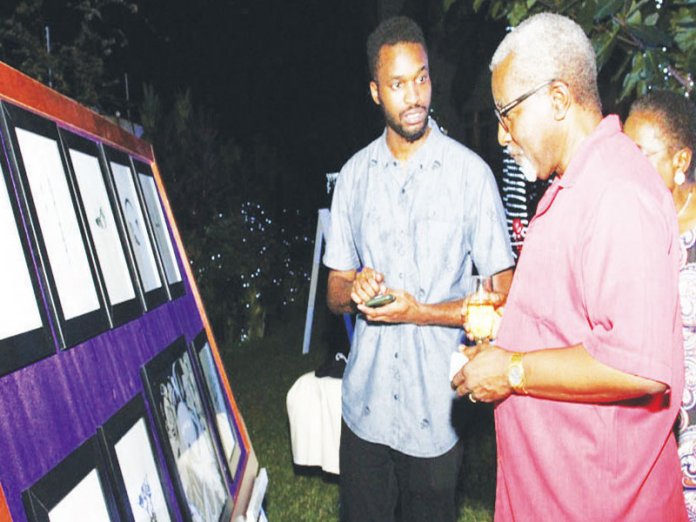 Yinka Olatunbosun reports on the multi-layered fiesta-styled solo art exhibition by a new visual artist, Onyema Okwodu with 2Baba, Adekunle Gold headlining the accompaning all-night music concert at a residential property in Ikoyi, Lagos, serving as a nice wrap to the year

Those piercing headlamps from the arriving Rolls Royce and other exotic cars were indeed enough to light up the miniatures on display inside the home of the oil and gas business tycoon, Abdulrazak Isa recently at the Christmas party with a resort theme.

Naturally, the fresh collection of artworks from Onyema Okwodu was carefully tucked behind the wine stands where beautiful, smiling ladies received guests with champagne glasses and white wine.

Not blinded by the shimmering view ahead, this reporter stepped on the lush garden where some of the monochrome paintings by the artists were arranged.

Okwodu, presumably in his early twenties, was testing waters with this first solo exhibition. Influenced by abstract realism, his idea was to use a simple form to create a detailed work. Being on a break from art school at a university in Pennsylvania, US, he took his time to explore his philosophy of life.

Using graphite and ink pen, Okwodu seems to be on the path of carving a niche for himself with his style, while positioning visual art as something that can have a broad appeal.

A case in point is his body of works on fabrics. T-shirts and shirts provided the ground for transplanting his creativity pieces from just wall paintings to fabrics, in a similar way that the trail-blazing New York-based Nigerian artist, Laolu Senbanjo had done for his afro-mystic expressions.

Taking it further, Okwodu’s works were paraded on the electronic stage flats that constituted the backdrop for the fashion show that followed. Meanwhile, Okwodu took his viewers through the visual journey with many untitled works.

One of them bore the image of two hands, in firm handshake. What was really significant was that one hand was white while the other was black. The subject matter of racial unity in this painting may have been unintended but is not exactly a surprise coming from a budding artist who is an eye-witness to the racial polarity that marks the current temperament in the US.

Okwodu would later talk about his work titled, “Domesticated” and the philosophy behind it. “This one is in prison- a prison from which he is trying to escape from. He is comfortable with the prison. He’s not affected too much by it. The idea of being imprisoned in a place you’re comfortable with is what inspired this work.

“It’s a feeling of being restrained even in the area I’m familiar with,” he explained as others who were admiring his works politely eavesdropped. Okwodu started drawing at the age of four alongside his brother. Both of them were fascinated by comic characters.

“Later, I started drawing portraiture of human faces. I began drawing from my imagination and later discovered the black and white style. People love my work and wanted to see more of it. Although some people prefer to see what they can easily understand to these abstract works,” he said.

Later, on the concert-size music stage that doubled as a runway, he engaged his audience in a softer-toned conversation about his works.

To give the night its tropical taste, Adekunle Gold rolled out his medley of ethnic vibes which resonated with some of his fans in the crowd. Perhaps, sensing the aesthetic distance between him and his audience, he respected it and danced to his own enjoyment on stage with his hits such as, “Pick Up”, “Ariwo Ko”, amongst others.

The biggest surprise of the night, 2Baba, created a few minutes of suspense before showing up on stage with his monochrome shirt on black pants to the screams from some lively ladies in the house. 2Baba, a very discerning artist was quite sensitive to the shrinking voice of female fans who crave his attention since his marriage to his-long time girlfriend, Annie Macaulay, especially when he ventures into singing, “True Love”.

At a point in his performance, he was compelled to ask his female fans to at least pretend that he was still searching for true love. That appeal changed the momentum as the multi-tiered white building was besieged by ladies and guys arriving from clubs perhaps on the tip-off that 2Baba was in the building.

2Baba broke away from the stage, pulled by the fans for selfies while performing his hits such as, “Ihe Neme”, “African Queen” and then it was 2Baba’s turn to pretend to be done with the performance without singing his smash hit, “Amaka”. Even the quiet side of the audience became animated when he returned dramatically to end with, “I like woman o, I dey straight-forward.”