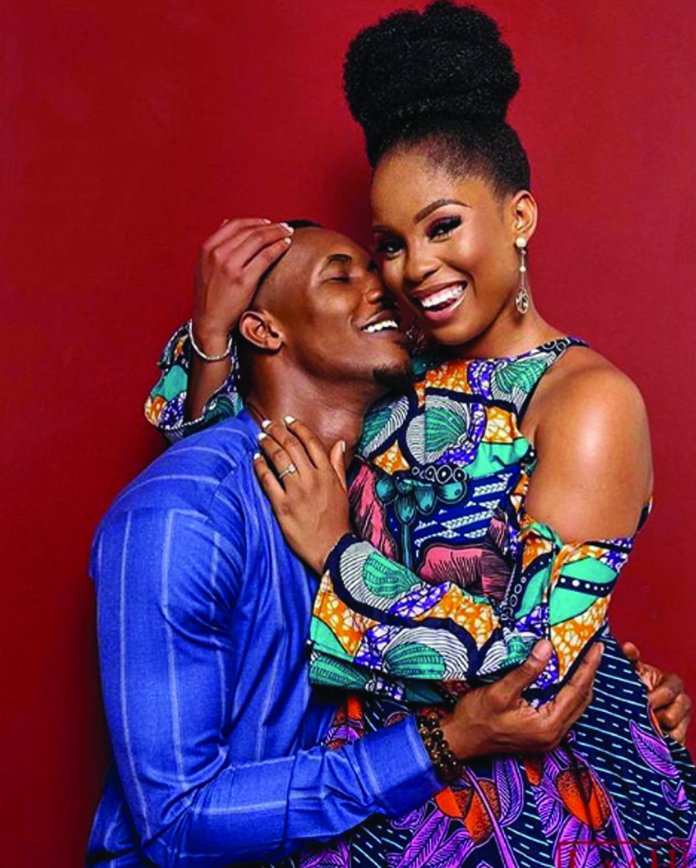 It was on a television entertainment chat show that ‘cocky actor’, Gideon Okeke revealed that there was a special lady in his life but acknowledged that he enjoys the attention he gets from the ladies. “I enjoy the attention I get from women, but I’m not just single, I have a great lady in my life.” Thereafter, he enthused about the special lady: “I’ve got an adorable lady who wins heart overall and is very secure about my working relationship with these ladies (Tinsel Stars). I can’t wait to walk her down the aisle! I’m done looking! Found a crown jewel that reins me in. God bless our courtship.”

Months later, the actor and his fiancée, Chidera Udueze, are set to walk down the aisle this December. The actor shared their beautiful pre-wedding photos on his Instagram page on Monday, with a short prayer for their journey ahead.

He wrote: ‘’Have you ever wondered why when greatness happens to be on the cusp of unraveling, that’s when a certain West wind of resistance finds its perfect timing to blow? Honey’m. Nothing! Nothing will ‘deshine’ the glory moments that are ahead of us. I seize this moment to reaffirm to you, ever so defiantly, that we both bear something-great-about-to-happen. Grace abounds that we may be empowered, as the wisdom of God, is profitable to direct our paths. Thank you for holding my hand. Here goes…to the Future!”

The talent scout and model manager, Chidera, and the actor, Gideon, had met through a friend and successfully had their traditional marriage in late April this year. Since the identity of his fiancée became public knowledge, Gideon who is known to keep his life private has in the euphoria of his new status and experience, been seen teasing his followers and dishing out some words of advice for men regarding marriage.

Perceived as the ‘one man to a woman’ kind of guy, Gideon doesn’t strike one as a flirt. Fresh from the very reality show that fetched him fame, Gideon had this experience shared during a chat. “My late dad said ‘Son I am very proud of you. You have made yourself proud, you have made the family proud but I have one personal beef with you.’ He said that to me in my hotel room and he was like, ‘why chase one girl, when you can face the money, get the money and get all the girls?’

He was joking but serious and we laughed about it and he just tapped me on the back and I was like maybe that was what I should have done differently, but no disrespect to the lady I was involved with, she is an amazing person…everything has gone right. I didn’t plan it, I am a testimony to what you ask for is what you get because I am here because I asked for it. I prayed, I fasted, and I gave. I asked to be here, so this is not a mistake at all.”

As an actor, Okeke has played dynamic roles both on stage and screen. Whether he is on stage or screen, he always throws all in the ring to deliver a believable performance. The actor, model, TV presenter…came to limelight in 2006 when he appeared as a contestant on the first edition of Big Brother Nigeria. In 2008, Gideon joined the cast of MNET TV drama series Tinsel, as Phillip Ade-Williams, the arrogant son of a media mogul, a role he played for 10 years. An only child, Gideon grew up in Ajegunle, one of the slums of Lagos, a place he speaks so fondly of.

He attended Nnamdi Azikiwe University where he studied applied bio-chemistry. He later enrolled at the Lee Strasberg Institute in New York where he obtained professional training in acting. After appearing in the first edition of Big Brother Nigeria, Gideon has experienced a meteoric rise in his acting career, featuring in other productions such as Steve Gukas’ multiple award winning movie ’93 Days’ which he got nominated for an African Magic Viewers’ Choice Awards and ‘Crossroads’ which recently fetched him an African Movie Academy Award.

Gideon has also appeared on the South African TV series Jacobs Cross. In 2014, he played the role of Bernard in the irokotv series Poisoned Bait, directed by BAFTA LA award-winning director Leila Djansi. In addition, Gideon was the host of the DSTV game show Money Drop. He landed his first lead role in the Nigerian drama film Relentless in 2010, starring alongside Jimmy Jean-Louis and Nneka Egbuna. In the same year, he played the role of Tobena, the love interest of the lead character in the romantic comedy When Love Happens.