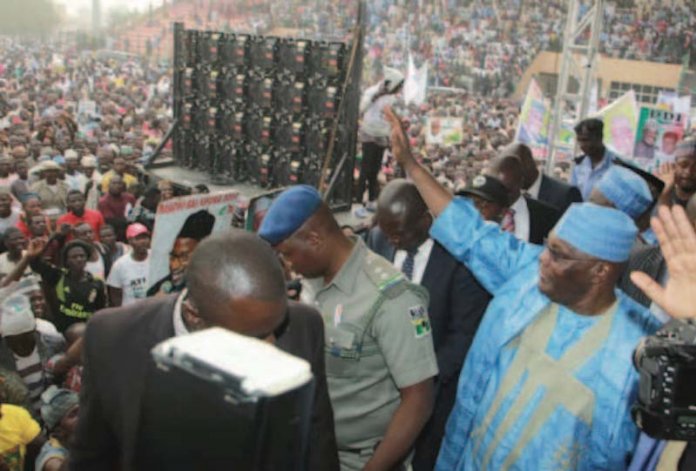 Adedayo Akinwale in Abuja and Segun Awofadeji in Gombe

The presidential candidate of the Peoples Democratic Party (PDP) in the 2019 general election, Alhaji Atiku Abubakar, and the National Chairman of the party, Prince Uche Secondus, have enjoined the people of the North-east region to defend their votes during the election and join the rest of the country in the mission to rescue the nation.

They also called on the party’s supporters in the region not to allow the Independent National Electoral Commission (INEC), police and other security agents to deprive them of their votes.

Atiku and Secondus spoke yesterday at the party’s North-east zonal rally in Gombe, Gombe State as jubilant crowd drawn from the six states of the zone welcomed them.

The presidential candidate said the situation in the country since the All Progressives Congress (APC) came to power called for all hands to be on deck to rescue the country’s democracy.

He said PDP was sure of victory, adding, however, that this would depend largely on the people’s resilience in the face of the desperation by the APC to remain in power.

He assured the people that if elected, he would return the country to the path of wealth, security of lives and property and development.

Secondus charged the people to be ready to vote out the APC by coming out on the voting day.

“You must not only vote but must be ready to defend your vote, the APC is not preparing for election, they want to rig but you must be ready to resist their antics,” he told the mammoth crowd of supporters and party enthusiasts.

Secondus said APC has destroyed the country, adding that the PDP and Atiku are coming back to power to save the situation.

He said the economy of the country had been destroyed by the APC administration, adding that President Muhammadu Buhari only painted a gory picture of it recently.

He said Atiku is coming with all the prerequisite experience both in public and private sector to restore the country’s lost glory.

According to a statement from Secondus’ Media Office signed by Mr. Ike Abonyi, the Speaker of the House of Representatives, Hon. Yakubu Dogara, also addressed the rally that was attended by top PDP stakeholders, including the Deputy Senate President, Senator Ike Ekweremadu.

The national chairman performed the symbolic handing over of flags to the presidential candidate and the six gubernatorial candidates of the party in Gombe, Adamawa, Taraba, Borno, Yobe and Bauchi States that make up the geo political zone.

Other speakers at the rally, which recorded a large turn-out of PDP supporters, include a former national chairman of the party, Senator Ahmadu Ali, and former governor of Kano State, Senator Rabiu Musa Kwankwaso, who called on the PDP supporters to vote all its candidates.

The North-east Zonal coordinator of the Atiku Abubakar Campaign Organisation and Gombe State Governor, Alhaji Ibrahim Dankwambo, told the people of the North-east that the 2019 election would not be about victory for Atiku alone but for the entire region.

He thanked all those that contributed to the success of the rally, which was held despite the bad weather that affected flights’ landing at the Gombe International Airport.

Following President Muhammadu Buhari’s pledge to give his opponents a level playing ground in the 2019 elections, Atiku has urged the International Republican Institute (IRI) and the National Democratic Institute (NDI) not to believe “the president’s deceitful words but focus on evidence adduced by opposition parties that Buhari might not match his words with action.

The president had while speaking to a delegation from the IRI and NDI said, “I am prepared to give the opposition the opportunities I was not given in the past.’’

But, the former vice president in a statement issued yesterday by his media aide, Mr. Paul Ibe, said Buhari participated in several protests and marches, including the ‘Occupy Nigeria Movement’ and the 2014 APC march in Abuja and was not arrested or persecuted by the PDP.

He stressed that Buhari ran for the Office of President in 2003, 2007, 2011 and 2015 under a PDP government “and not once during those intervening years was he arrested, molested or persecuted in any way, shape or form”.

Atiku said, “As a matter of fact, immediately after his experience with Boko Haram terrorists in Kaduna on July 24, 2014, the then PDP administration bought Buhari a $300,000 dollar armoured and bomb-proof SUV for his protection; Buhari received the vehicle which helped save his life.

“Never was Muhammadu Buhari or any of his relative’s accounts frozen by the Economic and Financial Crimes Commission (EFCC) or any other government agencies under the PDP and never were his running mates, children, friends and family targeted.”

The former vice president added that PDP ensured that INEC was independent and appointed disinterested individuals to its board, including Prof. Attahiru Jega, who the then President, Goodluck Jonathan, had never met.

He added that PDP also ensured that vital government agencies like the National Bureau of Statistics (NBS) were not politicised, whether or not their reports favoured the government.

Atiku lamented that since coming to office, Buhari has refused to reciprocate the good treatment meted out to him by the PDP and has instead persecuted, harassed and attempted to intimidate his likely opponents, even before they became candidates.

He stated, “Their businesses have been affected with the government either pulling out of or attempting to pull out of commercial contractual agreements freely entered into between government agencies and businesses owned or partly owned by perceived presidential opponents.

“Also, in a bid to intimidate the presidential candidate of the PDP, Atiku Abubakar’s plane was invaded by a crack combined military team on November 11, 2018. That was unprecedented in Nigeria’s history and never occurred even under military rule.

“Opposition presidential candidates who participated in peaceful marches have been arrested and are currently facing trial. Others were set up by government agencies including the Code of Conduct Tribunal and were tried until the government’s case collapsed at the Supreme Court.

Atiku pointed out that an opposition candidate on the verge of winning an election was strangely charged for examinations malpractices and his win was overturned.

He stressed that sadly, on Monday, December 17, 2018, in a Freudian slip during a live TV interview, Malam Garba Shehu, the president’s spokesman, revealed that Buhari had ordered the National Bureau of Statistics (NBS) to forge the latest unemployment numbers seeing that they do not favour the government so close to an election.

Atiku said this is even as Buhari has refused to sign the amended Electoral Act knowing that the Act would prevent the government from rigging the elections.

He added that the most telling action by the president was his attempt to foist his own biological niece as the Chairman of INEC but for the uproar of the opposition backed by the international community.

“These and other actions completely contradict President Buhari’s assurances and we thus urge the IRI and NDI not to be hoodwinked by the president’s deceptive words, but to focus on what cannot lie – the evidence.”

In a related development, INEC has expressed deep concern over perceived lack of neutrality of some security personnel ahead of the 2019 general elections.

To this end, the commission said it was imperative to review the template for the 2019 general elections in order to reassure Nigerians and the international community of its commitment to credible elections and to protect the sanctity of the electoral process.

Chairman of INEC, Prof. Mahmood Yakubu, disclosed this yesterday in Abuja at the police/stakeholders’ security summit organised for the Nigeria Police Force.

According to him “As with all elections, security is going to be a major issue in the 2019 general elections. Security agencies have a responsibility to secure the environment for elections. In doing so, there is the overriding responsibility for professionalism and neutrality.

“The rules of engagement must be clear to all. Learning from the cumulative experience of the off-season elections conducted into 195 constituencies since the 2015 general election, the conduct of some security personnel has become a major issue of discussion. We are deeply concerned.”

He stressed that the commission would continue to work with the security agencies for the arrest and prosecution of violators of the electoral act.

According to Yakubu, “Working together with the police, we have successfully prosecuted 42 electoral offenders following violent disruption of the Minjibir State Constituency by-election in Kano in 2016.

“Similarly, a number of other prosecutions are ongoing in Rivers State and most recently in Osun State where the police has forwarded nine case files to the commission, out of which three cases involving vote buying and illegal possession of PVCs are being prosecuted. INEC believes that the best deterrence to violations of the law during elections is swift prosecution. We will continue to work with the security agencies in this regard,” he added.

The chairman also revealed that all Permanent Voter Cards (PVCs) for fresh registrants have been printed and delivered to the states and FCT for collection at various local government area offices.

“The commission plans to devolve the collection to at least the Ward level soon. We will keep citizens informed of the process. However, the 1,178,793 requests for replacement of damaged, defaced or lost PVCs as well as the 769,917 requests for intra and inter-state transfers are being processed. The PVCs will be delivered to the states by the end of this week,” he said.

Buhari Appeals to ASUU, Others to Call Off Strike, University Workers Reject Plea