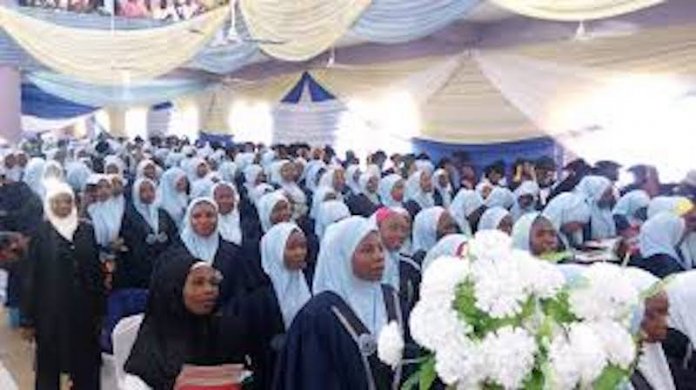 In his remarks, the Vice-Chancellor, Prof. Ibrahim Taofeek, congratulated all the graduands and wished them success in their future endeavors.

He said the 14-year-old university thrives on its motto, ‘Learning for Wisdom and Morality’ and urged the students to be good ambassadors of the school anywhere they find themselves in the nearest future.

He said the institution needs funding for more student hostels, library expansion, lecture theatres, among others.

The Chancellor, Alhaji Sayyu Dantata, who is the Chairman/CEO, MRS Oils Plc, to mobilise philanthropic support for the development of the institution.

While calling on well-meaning Nigerians and government agencies to support the university, he said no amount of money spent on education is too much.

Also speaking, the Pro-Chancellor and Chairman of Council, M.D Abubakar, urged the entire university community to be prudent in running the institution with dedication, honesty and the fear of Almighty Allah.

He added that curriculum of schools should be reviewed, that that universities should start training youths that would not only be self-employed but also be employers of labour. He also appealed to the federal government to include private universities as beneficiaries of the Tertiary Education Trust Fund (TETFund).

On behalf of the awardees, Masari thanked the institution for the honour and promised to continue to serve as ambassadors of Al-Hikmah University. He also stressed the need for cooperation and synergy between the public and private sectors to uplift people from poverty and ignorance.

He enjoined the students to recognise the privilege which their association with the institution confer on them and urged them to imbibe the values that the university was built on.

The Executive Secretary, National Universities Commission (NUC), Prof. Abubakar Rasheed commended the university management for the achievements it recorded in the past 13 years, saying that the institution has demonstrated potential of an emerging world-class university with a bright future. He pointed out that the future of the university depends on its continued and faithful implementation of strategies like facilities and infrastructure development; merit-based admission; curriculum review and modernisation; sustainable funding, compliance and student-centred approach.

This year’s convocation lecture titled ‘Restructure or Not to Restructure Nigeria’ was delivered by Professor Munzali Jubril, who emphasised that the country needs devolution of powers, responsibilities and resources from the centre to the federating units. “As Nigerians, we must be accountable and also practice a good democracy system that is not bias or corrupt,” Jubril said, adding that these can be achieved without re-structuring Nigeria into more geopolitical zones which would only take the country fifty years backwards.

The convocation was preceded by the vice-chancellor’s press briefing, where he highlighted the various projects of the institution, including the construction of drainage for international hostel; 17 feet chain link fence at Okoje Male Hostel; equipping the multi-purpose mini laboratory; equipping the school clinic; construction of culvert at the main entrance of the International Hostel to accommodate more run off water from Adewole and Mandate Market.

The vice-chancellor also hinted journalists about the new policy on drug test for students. He said the drug test would enable the institution to know the appropriate interventions to adopt.

A friendly football match was also organised as part of for the convocation programme between Al-Hikmah and Summit University Offa. The deputy vice-chancellor, registrar and other university staff were present for the football match that ended 1-0 in favour of Al-Hikmah University.

A special prayer also held at the school mosque; it was attended by the founder, the chancellor, vice-chancellor, bursar, the current Vice-Chancellor, University of Ilorin, Prof. Sulieman Age, as well as other staff and students of Al-Hikmah University.

The prayer was followed by a book launch in honour of the founder, Alhaji Abdur-Raheem Oladimeji. The book ‘The Unschooled Schooling Leaders’ was reviewed by Prof. Peter Okebukola.