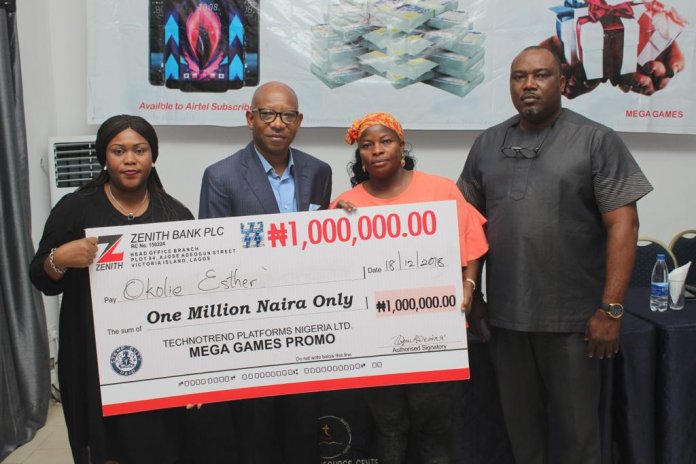 Seven Nigerians became One million naira richer as they won top prizes at the recent Mega Games Promo.  The promo, organized by a technology company,Technotrend Platform Nig. Limited, under the platform of Airtel Nigeria Network, presented the seven million naira cheque to six Nigerians and an Arabian, Rafaqat Ali.

Mr. Doyin Adeshina, Managing Director of Technotrend Platform Nigeria Limited stated that mega games promo which started barely three months ago has rewarded players with a total of twenty-two million naira , the top prize being a million naira. He added that the trivia game draws are done daily after five Questions are answered via the Airtel SMS platform attracting just N20 per day which must accrue to six thousand points qualifying the player for a daily draw. A million naira cash prize and ten smartphones are won every week. One of the beneficiaries of the N1m cash, Rosemark, a hairdresser, said she was surprised and initially didn’t believe she could win when she was called and received text. She thanks organisers of the Mega Games Promo for matching their words with Action.

Mike Chikodo Okoro, a retail phone seller said that a friend urged him to play the game. “I am so happy today as Mega Games Promo has made my day. I was planning to travel to the east but I received a call and had to postpone the trip. This money means so much as I hope to use it to settle some medical bills because I had an accident last year and has been treating my leg. The fund will be used to boost my business. Just keep on playing the game, forget about the one million. Just keep on playing it,” he said. Stella Yemisi Okolie, who came from Akure, was full of smiles and said, “I lost hope I thought it was not for real. Mega Games Promo has made my day as this fund came handy during the yuletide season. I am overwhelmed,” says Yemisi Okolie as she sang to the admiration of all present.

The National Lottery Regulatory Commission, Mr Jude Ughwujabo, commended the organisers, Technotrend Platform Nigeria Limited for the milestones and noted that the commission regulates promotions both from the end of regulators and even those of you that participated and won.  He added, “We make sure you get your prizes. We commend Technotrend and we hope they will come with new ideas next time for the Promotions.’  Suzzie Onwuka of Consumer Protection Council urged the participants to have faith in the process, as they can see the delivery of the organizers on their promise. “The council is out to protect the people. If there is anyone unsatisfied with the promo, reach out to us at CPC and we take it from there,” she says.

Technotrend Platforms Nigeria Limited (TPNL), a technology company that offers wholesales wireless (Mobile) access services to telecom subscribers through the mobile networks recently presented cash prizes of N1 million and smartphones each to lucky subscribers, who participated and won its on-going Mega Games Promo, which is principally designed to better the lives of Nigerians. The offer is available to Airtel subscribers only.

In the past few months, the firm has handsomely rewarded its customers with cash prizes worth over N12 million; ranging from N1m daily prizes and smartphones via the mega game’s promo, which is anchored on a point-based system where customers accumulate points to increase their chances of winning by performing any network-based mobile activity. 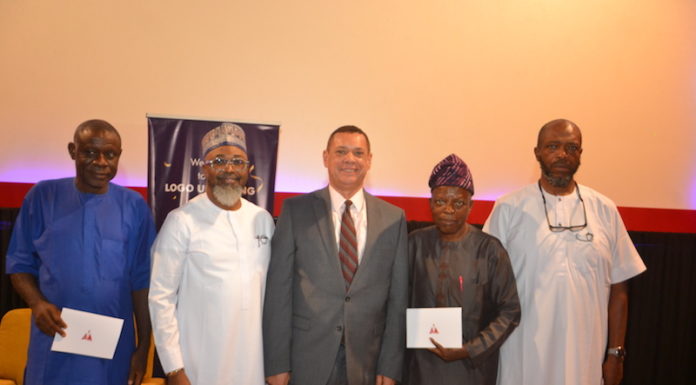