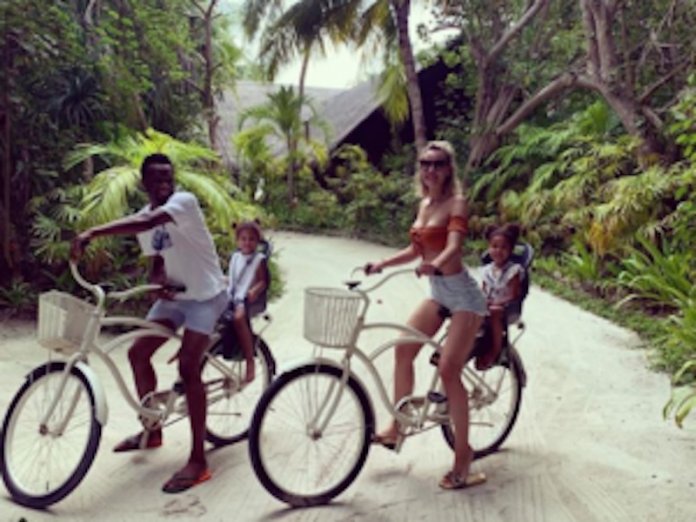 Nigeria’s international football star Mikel Obi is having a swell-time with the Russian mother of his twin daughters, Olga Diyachenko as the family goes on holiday, writes Ferdinand Ekechukwu

After surviving relegation with his Tianjin Teda Football Club of China, following a grueling season which saw the former Chelsea star participate at the 2018 FIFA World Cup in Russia, the home country of his beautiful partner, Mikel Obi is having a swell time with the mother of his twin daughters Ava and Mia as the family continues their holiday.

Mikel, his Russian partner Olga Diyachenko, and their kids, were photographed enjoying family time while vacationing on an Island. The couple and their kids looked carefree as they rode on two bicycles in the serene environment. Mikel and his family were in the Maldives on vacation after their brief visit to Nigeria. The Russian mother of two was seen dancing to a traditional song while she surprisingly suffered the “money-spraying” culture shock in Nigeria.

Mikel was in Nigeria as part of his holiday with his family for the first time where they met his parents. They visited relatives, friends and family members before he made other arrangements including setting up a programme for developing footballers. The family it seems is enjoying every bit of his off season break as the Chinese Super League (CSL) was concluded last month. Both couple took to their respective official Instagram accounts to post pictures of their vacation along with their children.

The 31-year-old Super Eagles captain posted a picture of him and his wife on bicycles both with one twin daughter at their backs. Along with the picture, Mikel wrote, “Poohdom cycling.” His wife Olga who often calls him ‘Pooh1’, also posted the same picture along with a message, “Love all around… Island life.” While in the country, his Russian beauty wooed Nigeria women, describing them as beautiful, graceful, and charismatic and not a shred of insecurity;adding that she hopes her children grow up to be just like that.
Mikel who started his break by taking his daughters on a lunch date while they were in London is expected to continue his vacation until next year when the league resumes in China.

Mikel’s relationship with his partner has come of age. It most times turn out befuddling with which term to describe her, maybe wife, girlfriend, or baby mama, partner or pair as the football star is yet to make it official.
There had been a report by the UK Sun which has yet remained underground that Mikel is also a father to two children with two different women he briefly dated. According to the report, he has a seven-year-old son and a four-year-old daughter. His reps did not deny the report but had preferred that the matter remain private as the midfielder is taking care of the kids. In all however, Mikel is glowing with Olga Diyachenko as she is seen often supporting him off and on the pitch.

The Olympic bronze medalist has been with Olga since 2013 and they welcomed their twin girls in September 2015. Mikel used to live in the same compound with her parents. According to Olga, it all started when she went to drop off their flat keys with Mikel. “Mikel used to be my parents neighbour. We lived there for five years. As my parents were leaving the flat, I dropped off the keys at his flat and that was how we met and started off as friends and then grew into lovers. “It was never a magical love story because we were neighbours for five years but we never met until I went to drop off the keys when my parents were about to leave the apartment.”

She further explained that their kids don’t have any Igbo or Russian names because they are citizens of the world. Olga said they would decide which tradition to follow, Russian, British where they were born or Nigerian. She said she liked Nigerian music but doesn’t watch Nollywood movies.
Olga said “I don’t watch Nollywood movies. Mikel watches a lot of Nigerian movies. I don’t watch them. I love listening to Nigerian music. They have nice beats.”

The couple recently celebrated their anniversary where Olga also wrote a short story of how they met and fell in love. “Five years ago today you walked into my parent’s house and into my life. A year later on that exact day we went on our first date, you are persistent.”
Mikel also wrote. “I am so lucky to share my life with you and our precious little peanuts. Love you.”