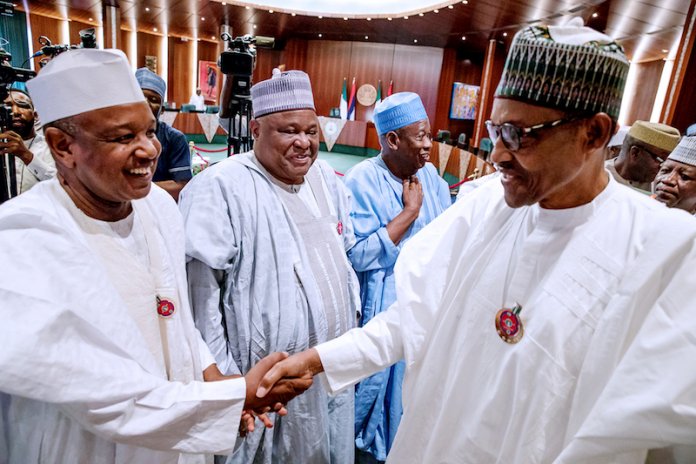 President Muhammadu Buhari yesterday in Abuja told the 36 state governors that the Nigerian economy was in bad shape and that Nigerians would need to tighten their belts.

The President’s alarm on the economy came on the day it emerged that the provisional estimates for Nigeria’s Balance of Payments (BOP) in the third quarter of 2018, showed the overall BOP swinging into a deficit of US$4.542 billion, compared to surpluses of $503.97 million and $2.787 billion recorded in the preceding quarter and corresponding period of 2017, respectively.

Also, report released yesterday by the National Bureau of Statistics (NBS) showed that the consumer price index (CPI), which measures inflation, increased to 11.28 per cent (year-on-year) in November compared to 11.26 percent in the preceding month.

Governor Yari said: “President Buhari told us that the economy is in bad shape and that we have to come together, think and rethink on the way forward.”

The meeting of the governors with the President was to find a lasting solution to the unresolved issue of new minimum wage for Nigerian workers after they had met Thursday night to take a position on the matter.

Although Yari did not disclose government’s decision on the new minimum wage, he noted that the President, “talked to us in a manner that we have task ahead of us. We should tighten our belts and see how we can put the Nigerian economy in the right direction”.

According to him, Buhari blamed the previous administrations led by the People’s Democratic Party (PDP) for Nigeria’s infrastructure decay despite huge petrol revenue.

“He (Buhari) wondered what happened in the past; that for the 16 years of the now opposition party, the PDP in power and with oil at 2.1 million barrels per day at an average of $100, many infrastructure are in bad shape,” Yari said. The governor said contrary to the president’s initial resolution not to make reference to the decadence that characterised the PDP leadership, “Buhari is compelled to bring those issues before Nigerians so that they can decide if it is best to bring the former ruling party back to power”.

“He is going to open a vigorous campaign and these are key issues that he is going to raise with Nigerians so that they can weigh their choices,” Yari added.

Speaking on behalf of other governors at a special extended National Economic Council Meeting and the launch of Human Capital Development Programme with the theme: ‘Healthy, Educated and Productive Nigerians for a Globally Competitive Nation by 2030,’ held at the old banquet hall, presidential villa, Abuja, Yari made a case for more funding for all levels of governments.

He told the gathering that there was need for political decisions that would expand the Nigerian economy to generate funding for every arm of government to develop human capital and address other sundry issues.

In his remark at the event, Osinbajo urged the governors and other stakeholders to desist from blame game and resist playing politics with issues of human capital development.

Noting that the issue of human capital development was perhaps the most important in Nigeria today, Osinbajo asked: “What can be more important than the well-being of the people you serve? We are aware of this and this is so with the state governments and we are committed to ensuring that we positively transform from the Nigerian experience as it relates to the quality of life and well-being of our people.”

Nigeria’s Balance of Payments Down to $4.5bn Deficit in Q3

Meanwhile, the provisional estimates for Nigeria’s Balance of Payments (BOP) in the third quarter (Q3) 2018, showed the overall BOP swinging into a deficit of US$4.542 billion, compared to surpluses of $503.97 million and $2.787 billion recorded in the preceding quarter and corresponding period of 2017, respectively.

This meant that the country’s imports of goods and services in the period under review outweighed its exports.

The Central Bank of Nigeria disclosed this in its ‘Third Quarter Brief on Balance of Payments Statistics’ report posted on its website yesterday.

According to the report, the current account balance (CAB) also worsened from a surplus of $4.453 billion in Q2 2018, to a deficit of $3.105 billion in the review period.

The financial account balance indicated an increased net incurrence of financial liabilities of $10.724 billion in the review period as against $2.576 billion recorded in the preceding period.

Furthermore, the report showed that the current account indicated a negative outcome during the review period as it recorded a deficit of $3.105 billion as against surpluses of $4.453 billion and $1.974 billion in the previous quarter and corresponding period of 2017, respectively. This development was largely attributable to the increased payments for imports.

According to the report, the surplus in the Goods Account decreased significantly to $2.126 billion in Q3 2018, from surpluses of US$7.510 billion in the preceding quarter and $3.416 billion recorded in the corresponding period of 2017.

“This was largely as a result of 79.7 per cent increase in the imports of non-oil products,” it explained.

In addition, the report showed that net out-payments for services during the review period increased significantly by 35.4 per cent to a deficit of $7.024 billion, when compared with the level recorded in Q2 2018.

When compared with the corresponding period of 2017, it indicated a much higher increase of about 65 per cent.

Similarly, the deficit in the income account (net) increased by 6.7 per cent to $4.161 billion in the review period, from a deficit of $3.899 billion recorded in the preceding quarter. When compared with the level in the corresponding period of 2017 it indicated an increase of about 39.5 per cent.

“The surplus in the current transfers (net) decreased by 1.2 per cent to $5.955 billion in Q3 2018 when compared with the preceding quarter. “However, the level of surplus was 2.7 per cent higher than the level recorded in the corresponding period of 2017.

“Provisional Q3 2018 BOP estimates for the Financial Account showed an increase in net incurrence of financial liabilities from $2.576 billion recorded in Q2 2018 to $10.724 billion in the review period.

“This is also significantly different from the net acquisition of financial assets of $3.740 billion recorded in the corresponding period of 2017,” it stated.

According to the central bank report, direct Investments inflow increased by 0.7 per cent to $438.84 million when compared with the preceding quarter of 2018. It however, indicated a decline of 45 per cent when compared to the corresponding period of 2017.

Nevertheless, portfolio investments inflow to the economy decreased significantly to $1.790 billion in the review period, from $4.233 billion and $3.321 billion in the preceding quarter and the corresponding period of 2017, respectively.

However, other investment liabilities increased slightly to $4.281 billion when compared with $3.226 billion recorded in the preceding quarter.

In a related development, the consumer price index (CPI), which measures inflation increased to 11.28 percent (year-on-year) in November compared to 11.26 percent in the preceding month, according to the National Bureau of Statistics (NBS).The 0.02 per cent points increase resulted from price increases in all the divisions that constitute the Headline index.

Food inflation stood at 13.30 per cent compared to 13.28 per cent in October while Core Inflation was recorded at 9.80 per cent from 9.90 per cent in the preceding month.

According to the NBS, the rise in the food index was caused by increases in prices of bread, cereals, milk, cheese and egg, fish, vegetables, fruits, oil and fats, potatoes, yam and other tubers.

Core inflation, which excludes the prices of volatile agricultural products, was down by 0.1 per cent from the 9.9 per cent recorded in October.

PDP to Buhari: Your Admission of Failure Means It’s Time to Go

Also yesterday, the PDP said Buhari had validated his rejection by Nigerians by admitting, before state governors, that he had failed to fix the economy of the nation, in negation of his 2015 campaign promises.

The party in a statement yesterday by its National Publicity Secretary, Kola Ologbondiyan, asked Nigerians to tighten their belts, as Buhari has admitted that the country’s economy has terribly worsened under his incompetent watch and that he has no solution to our economic realities.

According to him, “Nigerians must hold President Buhari directly responsible for the official flops, harsh economic policies and humongous corruption in his regime, which led to the collapse of our once robust economy, turned our nation to the poverty capital of the world with the worse form of hunger and starvation to the extent compatriots now consider suicide mission and slavery as options.”