Anthony Nzeako, an Emeritus Professor of Electronic Engineering, who doubles as the Head of Department of Electronic Engineering and Dean Faculty of Engineering, University of Nigeria Nsukka, has convened a historical meeting of his fellow Ukabians in Abia State, to see how a village of over two centuries of existence with a population of well over 50,000 pending the confirmation of its proposed census, can turn around the high points of the United Nations Sustainable Development Goal to its advantage. In this interview with Nduka Nwosu, he explains why the Umukabia Economic Summit scheduled for the fourth week of December is setting a pattern other Nigerian communities may follow to move to the next level of growth and development. Excerpts:

Can you run a short biography on your community Umukabia?
Umukabia is a big rural community of six villages with two major communities-Okpuala and Umuagbom. It is also a component of a larger community called Okaiuga Alike from which she derived her Autonomous Community. It is as well an integral component of the Ohuhu Clan in Umuahia North LGA in Abia State. Umukabia can best be described as a landlocked community, squeezed from all sides by other communities, hence she has a very small land mass and no direct access to any major road across the state and country Umukabia has no mineral deposits and other natural resources such as crude oil, rivers, etc. Indeed the name Alike (hard soil) describes a major physical handicap of the community. Her underground water level is covered by very hard rock not found in commercial quantity for exploitation, defying all modern borehole drilling instruments for water until recently and only in a section of the community where one of her prominent scientists Engineer Chinedum Nsofor after months of prayers, trial and error miraculously drilled water out of his compound.

Beyond this the community has no natural water flowing from the rocks or falls; it also lacks the presence of other natural resources. However, what she lacks in natural resources is compensated in human resources. In this regard, Umukabia may be described as the Japan or Holland of Africa. She is endowed with many very intelligent and educated, highly talented and very enterprising human resources, individuals who at various times had occupied and are still occupying very important positions of authority and influence in both the public and private sectors of the economy and at all levels of government.. There is a reasonable level of material wealth that abounds in the community. The question is how do we harness these human resources and available material wealth for the common good like Japan and Holland? This is the idea behind the proposed economic summit.

Can you educate us more on this economic summit?

The main idea behind this summit is to use what we have to get what we need. Oftentimes we complain of what we don’t have or what is lacking in our lives. We hardly look at or think of what we have, our talents, natural and physical potentials and possessions in order to meet our needs. The Scripture has it that man was created in the image of God who gave man unlimited potentials charging him to go into the universe, conquer and dominate it. Therefore, whenever we approach any situation, the expectation is that we find ourselves considering what we already have by way of our potentials and then proceed with the development of those potentials to attract what we need that we don’t have.

This is positive thinking. Let me restate that Umukabia has enormous high quality human resources, but very little or no mineral and natural resources, just like Japan or Holland. Therefore, if we can sit down to plan how to channel these potentials towards the socio-economic development of the community, as Japan or Holland did, Umukabia will be a prosperous community. The forthcoming summit is modeled after the United Nations 2030 Sustainable Development Goals (17 SDCs), the summit will first identify a set of SDGs of the community, map out achievable targets for each goal and then set up plans and time lines to meet each of the targets, using available human and material resources in the community. It is not just going to be another talk shop or a paper work presentation but a concrete action summit.

Have you tried to explore the presence of natural resources in Umukabia?

We have none. Given the examples of the Arab and most African countries, including Nigeria, in particular the oil producing communities, the possession of mineral resources such as oil has turned out to be a curse rather than a blessing. The developed countries of the world have demonstrated that the greatest assets to socio-economic and technological development are human resources.
Japan and Holland have neither mineral deposits nor large land mass, yet they are among the world’s greatest economic and technological giants, thanks to their high quality human resources. All that Umukabia needs now are concrete plans and strategies on how to effectively utilise her available human and material resources for sustainable socio-economic development.

How are you leveraging on your skill in farming to create food sufficiency and value added?

We are still peasant farmers and this is on a sad note considering how the world has been transformed since the advent of the agricultural revolution. Here in the former Eastern Nigeria, the former Premier Dr. Michael Iheonukara Okpara, who happens to be our own kinsman, launched an agrarian revolution that made Nigeria the leading exporter of palm produce in the world market. Today, Malaysia has taken that lead from us. What a shame because this revolution was not followed up with the collapse of the civilian government and the exploitation of huge oil deposits in the Niger Delta. That is why we are where we are today as peasant farmers and unable to feed ourselves. Revolutionising agriculture in the community is going to be one of the sustainable development goals of the summit. We are hugely optimistic that this summit would rekindle old values and passions while exploring modern ways of farming through mechanised agriculture.

What constitutes the intellectual property of Umukabia?

By Nigerian standards, Umukabia, can be rated as an intellectual giant, academically, professionally, and administratively. In academia, there are at least five living full- fledged professors of international repute and of reputable universities, more than two associate professors. These include two women, one of whom is the wife of our traditional ruler. In the professions, Engineering, Medicine, Journalism, Law, Accounting, Banking and Finance, Environmental Design, Construction and Management, etc., we are there in large numbers, and many are private consultants. In Administration. Umukabia has produced, and still has in place many high ranking administrators at both federal and state levels including a Judge of the Supreme Court (rtd) now deceased, a Federal Permanent Secretary (rtd), a State Accountant General (late), and a former Vice-Chancellor of a State University (ABSU) and Secretary to the State Government (SSG). The greatest among these till date was Chief Bob Ogbuagu, the Chief Executive and Managing Director of the defunct Eastern Nigeria Development Corporation (ENDC), who led what is generally referred today as the “Golden Era” of the former Eastern Region including Abia, Akwa Ibom, Anambra, Bayelsa, Cross River, Ebonyi, Enugu, Imo and Rivers states. The ENDC was the arrow head of the Agricultural and Industrial Revolutions of the region under the leadership of the then Premier of Eastern Nigeria Dr. M. I. Okpara. Umukabia also has very vibrant, highly educated and very talented middle class who are making waves in various areas of human endeavor. This is no small achievement.

Can you imagine what will happen if a good proportion of these human resources are mobilised and their potentials channeled towards sustainable socio-economic development of the community? This is the mission of the summit.

What do you intend to achieve through this awareness driven summit?

How are you going to raise funds for the envisaged SDGs?

There is a popular saying that you don’t start resting at the foot of the mountain, but at the top and in Igbo another saying goes thus: “Mgbugbu towuto, egbughiya ji”. By the first, we mean to say that we needn’t divulge our strategies before the action or actual Summit. What you are demanding now is one of the major issues to be tackled at the summit. A committee is already working on this along with several committees set up to explore all the vital areas that the summit would address.

According to the second Igbo (Ohuhu) saying, as the summit progresses, people will definitely see the need to raise funds through channels most convenient to the majority for the achievement of the set goals. There will be a platform for everyone to participate in the fund raising according to one’s capability. ‘Igwe bu ike’ means there is strength when the majority of the people decide to pool their resources together. Indeed, little drops of water make an ocean.

How does this summit align with the UN programme on sustainable development?

Sustainable development has been described as a “development that meets the needs of the present without compromising the ability of future generations to meet their own needs”. On September 25, 2015, at a special UN Summit: “Transforming Our World”, the Heads of State and Government of countries constituting the United Nations adopted the 2030 Agenda for Sustainable Development, including its 17 Sustainable Development Goals and 169 targets. The Agenda is a commitment to eradicate poverty and achieve sustainable development by 2030 world-wide, ensuring that no one is left behind.

Toeing the line of the United Nations, a number of well-meaning sons and daughters of Umukabia met on Easter Saturday, 31st March, 2018, under the distinguished chairmanship our traditional ruler HRM, Sir Eze Uzo Nwosu, and adopted a proposal to organize an Umukabia Economic Summit, with the theme: “Agenda for Sustainable Umukabia Development”. Following the United Nations 17 Sustainable Development Goals”, the aim of the Summit is to identify a set of goals, with achievable targets, to transform Umukabia to a sustainable prosperous community within attainable time lines. The Summit has been scheduled for the 26th and 27th December, 2018 and it will be a huge success story after which we shall reflect on one of Nelson Mandela’s famous quotes: “It always seems impossible until it is done.” 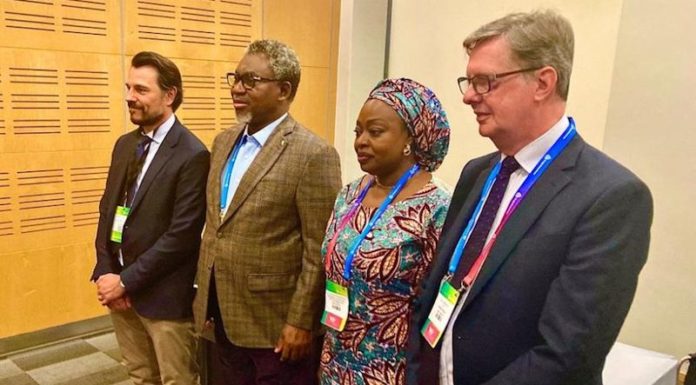