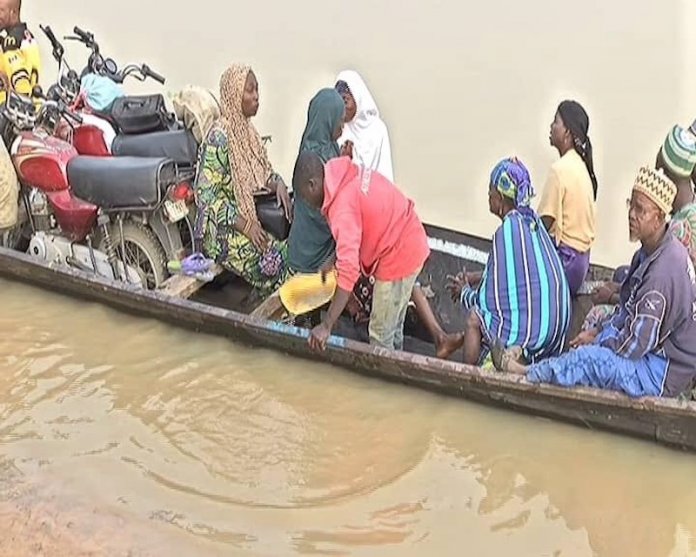 Hammed Shittu, who recently visited the ancient town of Lafiagi in Edu Local Government Council, writes that the drowning of 19 persons, aged between 12 and 19, has uncovered the underbelly of the abandoned 46km road project that should ordinarily link Kwara and Niger States, thus limiting the incessant occurrence of boat mishaps in the riverine community

The ancient town of Lafiagi in Edu Local Government Council of Kwara State was recently thrown into mourning following the death of 19 children, who drowned after the passenger boat they boarded capsized midway. The boat was said to have been conveying about 22 persons across River Niger when it capsized.

Since water transportation is the only means of transportation for the Edu riverine community, the incident was certainly not the first of its kind, as reported cases of boat mishaps characterise their daily living. This is because the only road that links Lafiagi to Niger State, which is 46km, had been abandoned by the successive governments of Kwara and Niger States for years.

The development has continued to make it impossible for the residents of the two states to enjoy the road transportation system to either move about their respective businesses or socialise among themselves. It is on this premise that the people of the two neighbouring towns have resorted to water transportation as the only way to move across the border towns of the two states.

However, on December 1, 2018, the absence of a connecting road between the two states was again brought to the fore. On a day they should be celebrating the beginning of another month and the last month of the year, the town was thrown into mourning following the news that the boat that was conveying some families to one of the towns in Niger State for Wolimat Quran programme capsized in the river.

As soon as information of the tragedy filtered into the village, residents trooped to the river bank, where the flying boat always takes off, to confirm what happened. On ascertaining the veracity of the news, it was tears galore, Apart from the loss of lives, goods like rice, clothes and other household materials prepared for the programme also sunk in the river.

Upon inquiries, THISDAY gathered that the flying boat was not supposed to carry the passengers as the only ferry boat being used for transportation has been down for almost six months without being attended to by the management of the ferry.

The development according to THISDAY checks however prompted the use of flying boats, which ordinarily should carry only eight passengers but instead carried about 22 people of that fateful day of the incident.

Following the incident, men of the Nigeria Police Force and Kwara State Fire Service were said to have moved to the scene on a rescue mission.
The rescue team, however was able to rescue only two on the day of the incident.

However, the Secretary of the Lafiagi Traditional Council, Alhaji Sulyman Aliyu, who confirmed the ugly development said the victims were aged between 12 and 19. The secretary also confirmed that four corpses were recovered on the day of the incident.

Also, the Public Relations Officer of the state police command, DSP Ajayi Okasanmi, who also confirmed the incident said the officers of the force and other security agencies had joined the local government council to recover the corpses. As at then, however said that the number of the passengers and the victims could not yet be ascertained as the recovery exercise was still ongoing.

Also reacting, the Director of Personnel Management of Edu Local Government Council Area, Mr. Toso Balogun said about 20 people boarded the flying boat to the Niger State to attend the Wolimat Quran ceremony. He said the rescue team deployed to the Chewuru boat depot first rescued 10 people, while searching for corpses on the river Niger continued until the rest were found.

Meanwhile, a visit by our correspondent to the ancient town of Lafiagi recently showed the pensive and mourning mood that had continued to trail the tragedy. The community have continued to throng into the family houses of those that lost their loved ones during the flying boat mishap that happened in the town.

Business activities that once characterised the social life of the people of the ancient town have become dull, as skeletal business were going on during our correspondent’s visit to the town.

Survivors
One of the survivors of the tragedy, Hajia Aisetu Yusuf told our correspondent in Lafiagi that it was the grace of God that helped her to survive the tragedy.

She said the incident happened 8.30 pm on Saturday, December 1, 2019 on their way to Niger State to attend a Wolimat Quran programme of one family’s daughter.

She said: “As we are going, I saw water coming into the boat at the back and I alerted the driver of the boat because the boat was carrying more than the normal passengers.

“Apart from the passengers that include nursing mothers and their wards, the boat was loaded with goods like rice and other household utensils meant for the ceremony and in all we are about 21 plus the boat driver, making it 22 inside the boat.

“In the twinkle of an eye, the boat capsized inside the river but one of the boat that was coming back to Lafiagi on that fateful day saw us when the incident happened and quickly move to rescue us, five of us were taken out from the river, while two have died.

“I want to tell you that five of us that survived was just by the grace of God as we were only left with pants on our bodies as our wrappers were washed away in the river.”

Yusuf therefore called the government to commence without further delay the construction of modern bridge that would Lafiagi to Niger State, so as to put an end or reduce the option of resorting to flying boats.

Also, one of the bereaved husband, one Alhaji Salihu Idris said: “I told my wife on that fateful day not to go using the flying boat on the river but she said that they are going in group and they have arranged a boat that will carry them and that she cannot withdraw from joining them.

“After her departure, I moved inside my room, but I couldn’t sleep. A few hours after her departure, a friend of mine came calling at my house to ask of wife and told me that there was a flying boat mishap on the River Niger that carried passengers going to Niger State.

“I then told my brothers that was with me and we then moved to Chewuru flying depot where I discovered the corpse of my wife. I told her not to go but she said she is not the only person going for the ceremony.

“I have taken the incident as an act of God. Because as a Muslim, I believe that it is wish of God and pray to Almighty Allah to grant her and other deceased Al-Janah Firdaos.”

Meanwhile, the state Governor, Alhaji Abdulfatah Ahmed has commiserated with the Emir of Lafiagi, Alhaji Saadu Kawu Haliru, over the death of some Lafiagi indigenes who were involved in the boat mishap at the Chewuru Ferry Port while crossing the River Niger.

The governor, in a statement issued in Ilorin on Sunday signed by his Chief Press Secretary, Alhaji Abdulwahab Oba, described the demise of the victims as unfortunate and a great loss to their immediate family, the Emirate and the state at large.

He urged families of the victims to take solace in the fact that death is an inevitable end of all mortals, while
praying that God grant the deceased eternal rest and give the families and the entire Lafiagi Emirate the fortitude to bear the irreparable loss.

Also, the Speaker of the state House of Assembly, Rt.Hon. Ali Ahmad, in a statement issued and signed by his media aide, Mallam Shuaib Abdulkadir said that there was no doubt that the incident has caused a lot of setback to the people of the town. He therefore prayed to the Almighty God to give the community the fortitude to bear the death of the victims.

Meanwhile, the lawmaker representing the Edu Constituency at the state House of Assembly, Hon. Adams Alliyu, called on the authority of the National Inland Waterways Agency, (NIWA) to mandate the usage of life jackets by passengers travelling on canoes and boats in the riverine areas of the state. He said that the provision of such materials would prevent future occurence of untimely death of passengers on the river.

Also, the lawmaker representing Moro/Edu/Patigi Federal Constituency at the National Assembly, Hon.Ahman Aliyu Pategi, while commiserating with the people of Lafiagi, described the tragedy as unfortunate one.

By and large, with this ugly situation that has continued to affect the lives of the people of riverine areas of the state especially the people of Lafiagi, it is very imperative that both the state and federal government rise to the occasion in order to put an end to the perennial mourning of the people of the town.