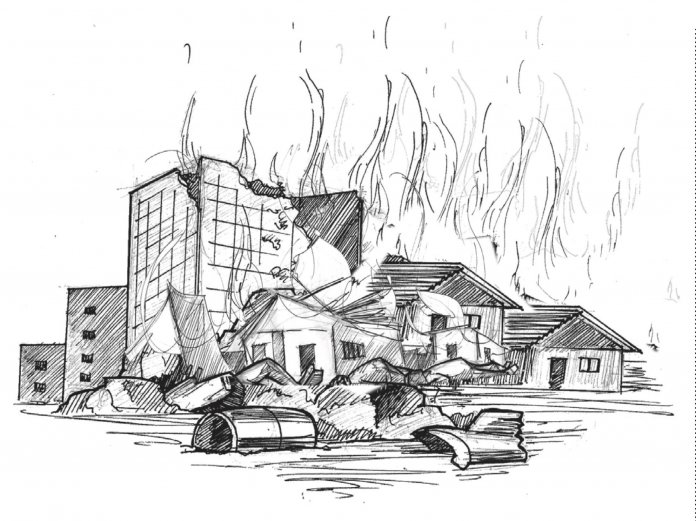 There is need to invest more in safety equipment

The Harmattan haze has announced its arrival and is gradually creeping and putting people and businesses at the risk of fire disasters across the country. Already, cases of fire outbreaks caused by the dry and dusty wind are becoming widespread, with the attendant losses. And since human and material toll from fire outbreaks are getting increasingly high, we call on both the government and the public to embrace safety measures that will mitigate these avoidable losses.

So much devastation was wreaked in recent weeks when assets and goods running into billions of naira were lost to fire that razed shops in Kano, Kebbi and Anambra States. Yet there are several of such cases that are not reported. Given its character as an extremely dry wind that originates in the Sahara, it is easy for fire to spread at the slightest ignition when the harmattan blows south wards, spreading its tentacles across the western coast.

Fire occurrences linked to weather have in recent years become a global crisis. The only problem is that it is not an issue that the authorities and critical stakeholders in our country pay attention to. Yet, a relevant case study which should serve as an eye opener of this danger and what it is capable of inflicting is the California wildfire. Although a perennial problem, the scale of the outbreak this year is considered the most devastating in California’s history. Beside the over 600 people declared missing and 63 confirmed dead, the cost of putting out the inferno is staggering. More than 5,600 firefighters were mobilised, with 23 helicopters in the air while 630 fire engines were on the ground. The fire has burned 138,000 acres of land and took weeks to contain.

The California fire, sparked by strong winds and lingering drought, has reduced many of the affected towns to ashes and destroyed more than 10,000 homes and businesses. But the firm responses by associated agencies to the challenges emanating from the humanitarian crisis should serve as a wake-up call for authorities in this part of the world on how to handle disasters of similar scope.

Given that private and public businesses, schools, hospitals and homes are susceptible to fire-related disaster at this time when dry wind tends to elevate the severity of combustion, we question the readiness of our disaster response agencies, particularly our fire fighter, to such tragedies. Combating fire disaster in the harmattan season is a task that usually exposes the ill-preparedness of the fire fighters and the country’s poor firefighting equipment. Usually their vehicles are without water to quench fire while they are always shorn of funds to upgrade their obsolete equipment.

Meanwhile, there are standard safety measures we must begin to enforce. The relevant authorities should work against indiscriminately situating petrol stations too close to residential apartments. This is becoming all too common in our country. In addition, corporate bodies and individuals must also invest in safety equipment and measures to forestall fire outbreaks.

Business and property owners must inculcate the culture of subscribing to insurance and indemnities that cover their homes, property, personal effects and businesses as this will minimise losses in the event of a fire outbreak or other natural disasters. In the same vein, they should avoid overloading electrical sockets or outlets with a lot of appliances at the same time to prevent sparks that may lead to fire. They must also routinely train their staff on comprehensive fire emergency evacuation procedures. These and other measures are important to guard against avoidable losses arising from the rage of nature like harmattan fire.