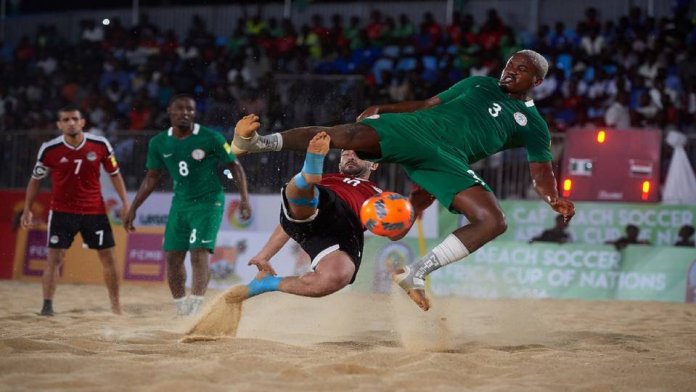 Nigeria turned back Libya 6-3 yesterday afternoon to brighten her chances of a place in the semi finals of the on-going CAF Beach Soccer Cup of Nations in Sharm El Sheikh, Egypt.

The win came about 24 hours after the two-time African champions lost 0-2 on penalty shoot-out to Senegal, after both teams ended it 4-4 at regulation and extra time.

Emeka Ogbonna, best player of the last edition of the competition held in Lagos in 2016, contributed two of the goals to add to the lone strike he secured against four-time champions Senegal on Saturday, to take his tally to three at this tournament.

Abu Azeez, another star player on the Nigeria side, also netted a brace, while Emmanuel Ohwoferia and Suleiman Ogodo got one goal each as the Supersand Eagles handed the North Africans the same treatment they got in the hands of the Super Eagles in two 2019 Africa Cup of Nations qualifiers in October.

With the Supersand Eagles having regained their buoyancy and marksmanship, debutants Tanzania are in the firing line as they take to the sands against Nigeria today starting from 2.30pm Egypt time (1.30pm Nigeria time).

Coach Audu ‘Ejo’ Adamu is likely to throw another star player Victor Tale into the fray to ensure a baptism of fire for the East Africans, while paving the Nigerians’ route to the last four.

The two finalists in Sharm El Sheikh will represent Africa at the 2019 FIFA Beach Soccer World Cup scheduled for Paraguay.