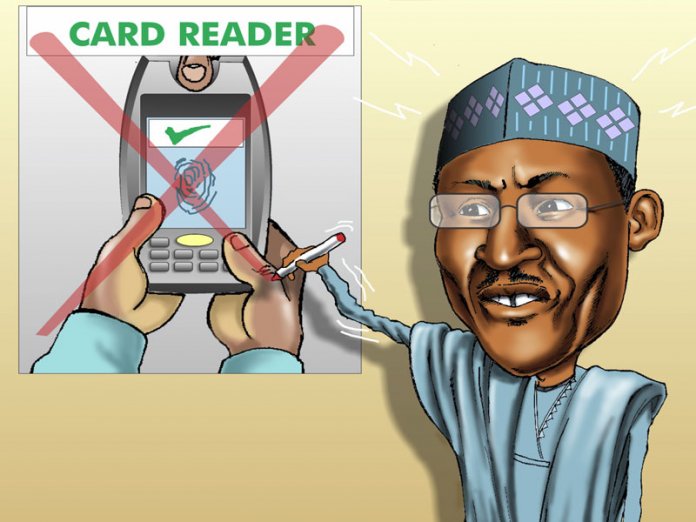 After months of speculations that the ruling All Progressives Congress (APC) might be uncomfortable with the idea of legalising the use of smart card reader for the accreditation of voters in the 2019 general election, President Muhammadu Buhari on Friday confirmed the fears of many critical stakeholders. With his refusal to assent to the Electoral Act (Amendment) Bill, 2018, the Independent National Electoral Commission (INEC) may be forced to rely on the use of ‘incident form’ in the accreditation of voters and the attendant lack of transparency in that process.

While we feel disappointed that the president would withhold his assent to the bill, we are not surprised. In 2015, the use of the card reader also generated so much unease in the then ruling Peoples Democratic Party (PDP) evidently because of the same cold calculations. But it is nonetheless unfortunate that the president would take a decision that unwittingly delegitimises the technology that has helped to improve on the credibility of elections in Nigeria and may have been responsible for his coming to power.

The implications of the presidential veto of the electoral amendment bill are quite obvious. Since the Supreme Court has already cast doubts about the legality of the use of card reader because it was not provided for in the Electoral (Amendment) Act 2015, the refusal by the president to sign the new bill into law may have rendered its use illegal. If INEC therefore deploys the card reader for the 2019 general election, any dissatisfied candidate or voter can go to court and invalidate the process.
The only option left for the National Assembly is for each of the two chambers to gather two-third majority and override the presidential veto. But because the issue has been politicised, it will become an APC versus PDP battle. In that case, the legislators will most likely not be able to get the endorsement of 73 senators and 240 House members needed to override the presidential veto. So, as things stand, the 2019 election will be conducted with the Electoral Act (amendment) Act, 2015. That precisely is the wish of the president given the content of his letter to the National Assembly.

We believe a disservice was done to the nation by the refusal to sign into law a bill whose overarching objective was to reduce human interference in the electoral process and minimise malpractices. For instance, some of the amendments mandate the immediate transmission of voting results from polling units to collation centres while giving INEC powers to utilise full biometric accreditation of voters with smart card readers and/or other technological devices, as the commission may deem fit.

However, it may be unfair to blame only the president on the electoral bill fiasco because there was also tardiness on the part of the lawmakers. Although the Senate passed its first version of the electoral bill in March 2017, the House of Representatives only came out with its own version in January this year. Besides, the House version introduced a new and patently self-serving sequence of elections. In that first bill, the national assembly election was to hold first, followed by governorship and state assembly while the presidency was to come last. That usurpation of the powers of INEC on fixing election timetable was the basis for the rejection of the first amendment by the presidency.

When the sequence of election was removed from the amendment, the president rejected the second bill forwarded to him by raising the issue of punctuation marks while the third bill failed to get his assent because, for some curious reasons, the National Assembly had removed the substantial issues contained in the original bill, including provisions for the use of card reader. When examined critically, given what transpired, it would seem the whole fiasco was contrived between the executive and the legislature to achieve a predetermined end. And it is a shame.

If action speaks louder than voice, as the old saying goes, it is difficult to fault the sentiment expressed by the main (PDP) opposition presidential candidate, Atiku Abubakar, that the oft-repeated promise by this administration to conduct a free and fair election next year now sounds very hollow.