New Coach for Ekong, Kalu, Okoye at Watford 9 mins ago

Gypsy King Calls off Planned Fight with AJ 12 mins ago 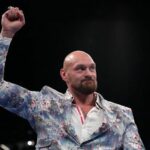 The Governor of Ekiti State, Dr. Kayode Fayemi, has said he has no intention to proscribe commercial motorcycle operation, popularly known as Okada riders, in the state.

Fayemi said the intention of the state government was to promote peace and unity among transport associations.

Fayemi, who disclosed this while receiving in audience the state executive of Okada Riders Association in his office, Ado Ekiti, said government will create any enabling environment for their business to flourish.

Fayemi, represented by his deputy, Chief Bisi Egbeyemi, in a statement yesterday signed by the Special Assistant (Media) to the Deputy Governor, Odunayo Ogunmola, warned okada riders against being used to perpetrate crime in the state.

According to him, government would not tolerate any act of indiscipline or lawlessness among transport associations.

The deputy governor observed that some okada riders have been alleged of engaging in unholy acts like bag snatching, pick pocketing, wailing of banks customers after withdrawing money from the bank and other nefarious acts.

Egbeyemi encouraged the leadership of the association to device measures of addressing the problem in the interest of the peace.

He said: “We want peace to reign in your association; we don’t want factions among you. We want you to be under one umbrella, to allow the government to stand by you.

“I pray that God will give your association the ability to maintain peace and to achieve success. We need your support and government will also support you.

“Once you are united you become formidable for anyone to destabilize your association.

“Against the rumour that we will bar you if we get elected into office, have we barred your association since we assumed office? Our government had no intention of barring okada riders from working in the State. All we want is peace.

“You have to checkmate those that are found of engaging in criminal activities across the State under the guise of being Okada riders .

Ashaolu expressed confidence in the leadership of Fayemi led administration and promised to maintain peace in the State.

Adegboyega demanded that the modality adopted by the association in generating internal revenue for the government should be allowed to remain.

He concerned about some individuals portraying themselves as government representatives in the interest of causing a divide and rule among the association.