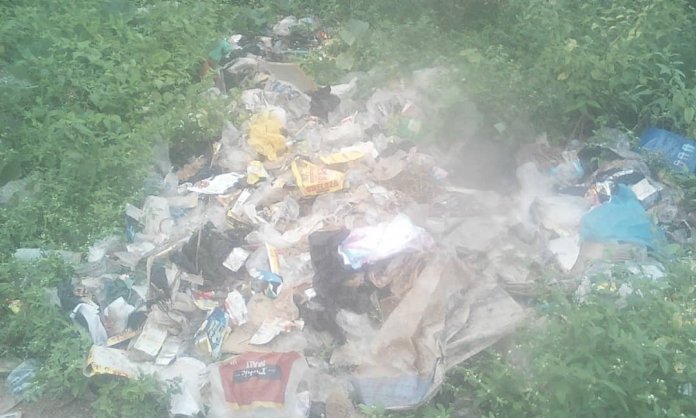 Waste disposal operators in Osun State have called on Governor Isiaka Oyetola to ameliorate the indiscriminate disposal of waste in the state, Yinka Kolawole writes

Arising from an emergency meeting over the indiscriminate disposal of waste littering major towns and cities across the state, Waste Disposal Operators, who are grouped by government as Private Sector Partnership (PSP) in Osun State have urged Governor Isiaka Oyetola and the good people of the state to hold the General Manager of the Osun State Waste Management Agency (OWMA), Mr. Ganiyu Oyeladun, accountable for the abysmal state of the environment.

The emergency meeting was convened to deliberate on urgent issues of concern including the recent statement credited to the GM in a press interview, where he blamed the PSP for the growing heaps of refuse in nook and crannies of towns and cities across the state. Refuting his claims, they said Oyeladun’s outburst was diversionary and far from the truth.

Absolving their group of any blame, the operators said Oyeladun, who doubles as the Senior Special Assistant to the governor on environment and sanitation should be honourable enough to accept responsibility for his actions and inaction in office instead of passing the buck and giving the dog a bad name, all in a bid to allegedly curry favour and to perpetuate himself in office.

The waste disposal operators explained that “the truth of the matter is: there are not enough waste disposal trucks across the state including Osogbo, the state capital as almost all the ones purportedly imported by government from China and authorised for use, have broken down one after the other, some for a period of two to three years, while the very few ones are epileptic in their operation, contrary to claims by the duo of former Special Adviser on Environment and Sanitation, Bola Ilori and Oyeladun that all the imported waste disposal trucks are functioning well.

“The present situation is as a result of the deteriorating condition of the open lorries with which the PSP members improvise to dispose waste in order to keep their job. This we hope to overcome soon. Osun State is in dire need of quality garbage trucks that are not too difficult to maintain.

“Also, the environmental policy of the state needs to be reviewed to make the Osun State Waste Management Agency purely a regulatory body rather than co-participant in the business of evacuation of disposal of waste to reduce government spending. There is also an urgent need for the establishment of dump sites in cities where non-existed, Osogbo is badly in need of one or two dump sites to cater for Ota-Efun-Kelebe axis as well as Iludun-Ilesa garage axis to ensure effective service delivery and to complement the only dump site at Onibu-eja on Iwo road catering for the entire Osogbo and its environs.

“Also, the sanitation situation cannot also be divorced from Mr. Oyeladun’s I-know-it-all mentality and his insensitivity to persistent complaints by the PSP on the substandard waste disposal trucks, the lack of spare parts for the trucks as well as failure on the part of the suppliers of the 61-no trucks, Hanfirqul Nig Ltd, to fulfil their promise to construct a standard workshop for regular maintenance of the trucks. Two of our members have already gotten High Court judgement in their favour on issues of administrative recklessness while similar cases are pending in court.

“Another contributing factor to the growing indiscriminating dumping of refuse is the lack of resources and political will by OWMA to continue the aggressive sensitisation of the public on the need to embrace hygiene and to ensure enforcement of law on environmental sanitation to discourage bad habit.”

The waste disposal operators further deplored the rivalry between OWMA and the (PSP) citing the preference being given to OWMA drivers over PSP members who are often made to wait for hours before taking their turn to offload waste at the only central dump site.

They also accused OWMA of short-changing PSP members by operating and collecting refuse bills in cluster areas originally meant for them and subjecting waste disposal operators to arbitrary levies, sometimes for the maintenance of dump sites which, they believe, was budgeted for by government in desperate attempt to frustrate them out of business

The GM was also accused of threatening waste disposal operators to establish their individual dump site, independent of government or be sacked for alleged act of sabotaging.

Asides the above listed complaints, the PSP operators demanded that the GM should explain the love-hate relationship between him and the special team on enforcement of sanitation laws led by Mr. Biodun Fatunsin, to the extent that the team is no longer as effective as it used to be in years past.”

The waste disposal operators also challenged Oyeladun to tell the public the condition of about 10 of the imported garbage trucks earmarked by OWMA for use as backup in times of need like this. They also urged him to also tell the public why another 10 trucks are allowed to rot away in a government facility since the last five to six years without minding the economic implications.

Similarly, they said the public would like to know what has become of the heavy duty trash compactor lorries inherited from the defunct Oyinlola administration and why was the minor mechanical problems not fixed to increase the fleet.

Appeal to Waste Operators
The chairman of the association of waste disposal operators in the state, Mr. Wale Olayemi, who presided over the meeting, expressed confidence that the PSP has come to stay despite antagonism by government officials and has appealed to members of the group to source for funds to procure durable trucks for their operations.

Addressing the meeting, a member of the group, Alhaji Salman Akano said environmental sanitation and beautification should be private-sector driven to enable government to save money for other projects and to cut cost. He counseled the state to borrow from best practices in some states and elsewhere to use environmental sanitation to create wealth and to provide employment.

While giving kudos to the former governor for the PSP empowerment program, the first time in the history of the state, urged government like Oliver Twist, to help to increase the capacity of the group for optimum performance.

Also congratulating Alhaji Isiaka Oyetola on his recent elevation as governor of the state, they wished him a successful tenure, just as they assured him of their cooperation and support in piloting the affairs of the state.