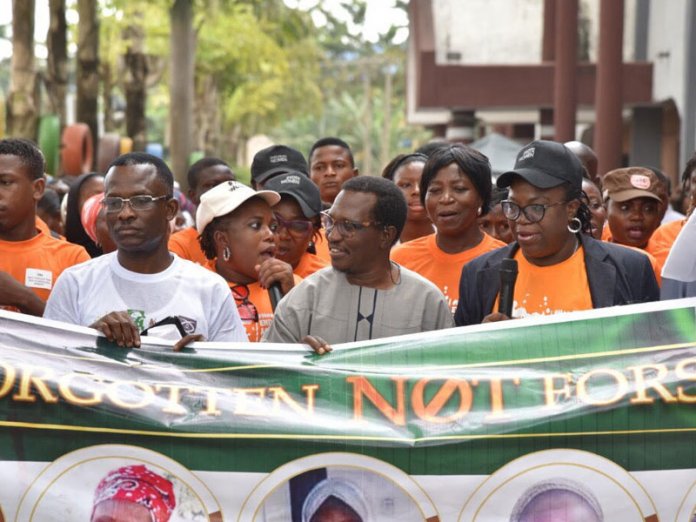 With the 2019 general elections in view, Catalyst for Global Peace Initiative in collaboration with other pressure groups, has re-engineered a fresh call on Nigerians to mount pressure on the federal government to rescue the remaining Chibok girls and Leah Sharibu, who are still in captivity. Sunday Ehigiator reports

It’s been over 1,500 days since the abduction of the Chibok girls. For the uninitiated, on the night of April 14, 2014, four years ago, terrorist group, Boko Haram, invaded the premises of Government Secondary School in the town of Chibok, Borno state, and kidnapped 276 female students from the school hostel.

The attacks on schools intensified in 2014, with the most high profile incident happening in Federal Government College of Buni Yadi in Yobe state where 59 male students were killed in February 2014. Some died from gunshots or knife stabs, while others were burned to death.

The abduction of the 276 Chibok girls happened just a few weeks later.

After the abduction of 276 of the girls, 57 of them escaped by jumping off the trucks and running into the bushes before their captors caught on. In the end, a total of 219 girls made it to Boko Haram’s nest in Sambisa Forest.

Amid waves of public criticism of the then federal government’s lukewarm reaction to the abduction, former Minister of Education, Oby Ezekwesili spearheaded the viral #BringBackOurGirls campaign on social media, that became an advocacy group pressuring the government for the return of the girls.

The campaign reached far and wide into the corners of the world, all the way into the White House of the United States of America when then-First Lady, Michelle Obama, held up a sign to demand the girls’ return.

The BBOG campaign kept the government more on its toes, but the rescue of the girls became more elusive especially after Shekau displayed them in a video and threatened to sell them off. It took two years before another Chibok girl regained her freedom.

Another four months passed before the first mass release of the girls happened after Boko Haram reached an agreement with the federal government. 21 girls were released in October 2016 before a further 82 regained their freedom in May 2017.

The deal allegedly cost the government the release of five Boko Haram commanders who were in the military’s custody, amidst rumours of the federal government also paying a demanded ransom of €3 million for their release.

After several calls and pressures from concerned Nigerians and groups, on March 21, 2018, the Federal Government of Nigeria announced that Boko Haram terrorists had returned 106 of the kidnapped children, including 104 girls who went to school. However, Leah Sharibu, wasn’t released by her abductors, due to her resistance to be forcefully converted to Islam. Sharibu was in SS1 when she was kidnapped, along with the other girls.

With the recent killings of over a 100 soldiers fighting against insurgency in the North eastern part of the country, Catalyst for Global Peace Initiative (CPI) in partnership with, Realm of Glory International church, the Committee for the Defense of Human Rights (CDHR), Bring Back Our Girls Movement (BBOG), Our Mumu Don Do Movement (OMDD), The Women Advocates Research and Documentation Centre (WARDC), and Citizens Monitoring Group (CMG), thereby came together to put the government on its toes, by taking responsibility of the security of lives and properties of the citizens of Nigeria.

The event started with an awareness march to the venue of event by the various groups involved, with each of them able to draw attention the attention of onlookers to the messages carried in their displayed placards and banners, before the speech session kicked off officially.

In his introductory remarks, Convener CPJ, Catalyst Abraham Aiyedogbon said: “It’s my conviction that Nigeria will not remain the same after this movement, because it has been said, that all that evil needs to triumph, is for good people to watch and do nothing, say nothing, and pretend like they see nothing. But now that there is a forthcoming election, there is a great effort to awaken the Nigerian people and youths from their slumber; it is time to bring back the real change; not the change that have changed.

“So on behalf of CPJ, it is our pleasure to welcome you all to this great occasion. I think the fact that this event is holding in the premises of a church, speaks volume. For a long time, the church has been like an army parked. Being armed; either properly, or not sufficiently; but not deployed, you and I will agree, that if religious people have been mobilised, and they have been right there deployed, and informed about their civic responsibility, and of the fact that the office of the citizen is higher than any political office in the nation, about the fact that power belongs to the people and not to the government, as it’s the citizens that make the government and not the government that makes the citizens, you will discover that these political looters, or executive thieves would have long been over-throne.

“The theme ‘Not forgotten; not forsaken’ is to let every girl child out there currently suffering one form of abuse, domestic violence, sexual abuses or molestation by these insurgents, or from their cruel guardians know, that though it seems nobody cares about them or they are voiceless, we will be their voices and they are not alone. To those that we have lost, we will not forget, and for the others still suffering it, we will not forsake them”.

Founder OMDD, Charles Chukwuemeka Oputa, popularly known as Charly-Boy the Area Father in his charge, admonished participants on the need to realise that if they keep silent about their plights, the oppression and insurgencies would continue to triumph in Nigeria, nothing that it is just a matter of time before it spreads to other major cities like Lagos, in Nigeria if people fails to sincerely come together and mount pressure on the government to be more responsive to the killings in Borno State, before declaring a minute silent for the departed soldiers who recently lost their lives weeks ago, in the fight against insurgency.

In her address, Mobiliser BBOG, Aisha Yesufu, heightened the tempo of the atmosphere as she shed light on the plights of some of the young girls who have lost their lives through several forms of abuses asides insurgency. She said, “When we talk about these incidents happening in the North-east, I feel pained when some persons say it is no real. Some even say the stories are fabricated; this is so unfair. We vote in this people to secure our lives and properties, but what they only care about is their fat bellies and rich bank accounts, even at the detriment of innocent lives”.

Speaking further, she referenced 13-year-old Elizabeth Ochanya, who was sexually molested by her uncle and cousin from eight till 13 when she passed on, as she couldn’t withhold the suffering any longer. “Ochanya could have being rescued and still be alive if Nigerians had cared about her plight”.

She ended by given a strong warning that there are several Ochanya’s out there waiting to be heard and rescued. “Since they are regarded voiceless due to their poverty state, Nigerians should rise up to their rescue”.

In her address, the Chairperson, WARDC, Mrs. Abiola Akiyode Afolabi said, “Women have become the most vulnerable in our present day Nigeria. Talk about sex slave, under education, illiteracy, societal relegation and victimisation and even in the activities of this Boko Haram; they are the worst endangered and affected. This is so because; we are yet to realise the real value of a girl child and women to every society. We are home builders, wealth managers and even wealth creator. Of the out-of-school children, the girl child holds the highest percentage. They are married off early at a very tender age and even sold as slaves and sex toys to the highest bidder. This is not right. We as Nigerians need to condemn these acts against the girl child all together. When you train a woman, you are building not just a home but a nation. And without woman, there is no nation”.

While delivering the last speech of the day, before the groups proceeded for a joint awareness march, Pioneer, CMG, Mr. Gideon Para-Mallam, placed a call through to Leah Sharibu’s father, Nathaniel Sharibu, to express solidarity of the group to the family, as the groups promised to be of assistance to the family in any way possible to ensure the release of Leah. Responding to the call, Mr. Sharibu, appreciated the supports of the group and every concerned Nigerians who have shown support to the family in this trying moments, praying that, “May God protect every single one of us in Jesus Name”.

The highpoint of the event was the non-fictional, but dramatic illustration of the killings and kidnap activities of the sect, and the agony the parents of the abducted girls are going through, by the drama group of the Realm of Glory International, which left a strong feeling of empathy and will to show concern for the abducted girls still in captivity, as if they were our own children.