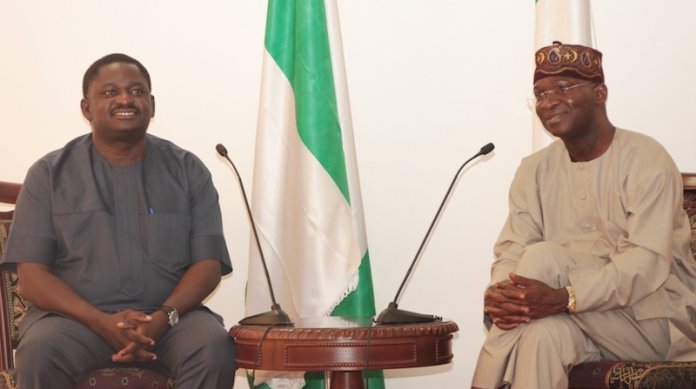 A developing debate, which borders on which of the geo-political zones is next to produce the president come 2023 presents a case of the idealist up against the realist, writes Olaseni Durojaiye

The 2019 presidential election may present pointers to what the 2023 presidential poll will look like given that some political gladiators have begun to use the 2023 presidential slot as bait to corner votes from their zones in expectation that the presidency would come to them.
Minister of Power, Works and Housing, Babatunde Fashola stoked the issue weeks back, when he called on people of the South-west to turn out en masse and vote for President Muhammadu Buhari’s reelection as a way to return power to the zone in 2023.

He did while speaking at two different functions in the region. It was first in Ibadan and second in Ikeja, both capitals of Oyo and Lagos States respectively. Given Fashola’s persona as one gifted in the art of thorough planning and creative execution of his action plans, political analysts noted that the locations, where he made the call are tactical and instructive.

The political clout of the region is in the two states and it is noteworthy here. Ibadan is still considered the political capital of the South-west and strategic to political considerations in the region. On the other hand, Lagos is believed to be the leading light of political sophistication and developmental strides in the region and nation at large, thus making the two locations where Fashola chose to drop the campaign message very instructive.

At the two events, Fashola called on voters in the region to vote massively for the re-election of President Muhammadu Buhari, arguing that doing so would guarantee a return of the nation’s presidency to the zone.
This position was first mooted by the National Leader of the ruling All Progressives Congress (APC), Bola Tinubu, many weeks back but it didn’t gain much traction or dissention at the time.

Making the call in Ibadan at a Town Hall Meeting, Fashola had explained that “As South-west indigene, I will vote for the Buhari/Osinbajo ticket because my people stand to gain more from it. Voting for President Buhari would guarantee that power will return to the South-west in 2023.

“The South-west is presently occupying the position of the vice president. We have three key ministers and many different federal appointments from the present administration, which we cannot afford to lose,” he first said in Ibadan and repeated the argument days later in Lagos.

Unlike when Tinubu first hinted at the position and when Fashola reiterated it, opposition to the position was quick and not unexpected. Many leading politicians from the South-east extraction criticised the position and argued that it was the turn of the zone to produce the nation’s president come 2023.

The matter however took a different turn, when Senior Special Adviser to President Buhari on Media and Publicity, Mr. Femi Adesina joined the fray and aligned with the South-east position. He argued that equity demands that the South-east is allowed to rule at the center come 2023, but was quick to add a caveat that the zone will need to play the right politics if it wanted the presidency in 2023.

Speaking at the Abuja residence of a former governor of Abia State, Dr. Orji Uzor Kalu, the presidential spokesman said “…equity demanded that the South-east should also produce the presidency; the region’s kind of politics in 2019 would determine its fate in 2023.”
He added: “I have always believed that every region of the country should play good politics, because Nigeria curiously has been naturally zoned and not one zone can singlehandedly produce the president not even two, we have to align. The South-east and any other part of the country cannot produce the Presidency alone and we know that equity demands that South-east should also produce the presidency but the kind of politics the region will play in 2019 will determine what happens in 2023.”

Political analysts have interpreted both Fashola and Adesina’s positions on the debate as the reality up against the ideal. While the presidential spokesman is the idealist, the minister remains the realist in the case and noted that while mortals may covet the ideal, the realist often carry the day in politics or any other human endeavour at that.

Analysts hold the view that while the ideal would have been for the South-east to produce the president after President Buhari’s second term, as the zone is yet to do so since the return of democracy in 1999, the reality of the nation’s political landscape may be pointing at something different, at least, not in 2023.

Another drawback for the South-east is presumed to be the fact that more of the states in the zone are controlled by the opposition PDP just as its best and most marketable politicians belong in the party.
But beyond political calculations and voting strength, can the Igbo nation clinch the presidency in 2023? The odds, realistically do not pan in that slant.

THISDAY checks revealed that several leading Igbo politician are not convinced that the presidency would go to the zone in 2023. While some are aware of the futility of pushing the project given the insincerity of the political class to the Igbo cause and decided to maintain sealed lips in good conscience, others are considered as businessmen who might trade-off for personal gains and continued political relevance.
Given the prevailing political scenario, analysts therefore contended that the smartest choice for South-east voters in 2019 is to vote according to their conviction and not be swayed by the carrot of 2023 being dangled before them to curry their votes.
Those who hold this line, among them Dr. Kolade Adams of the political science department, Lagos State University (LASU) Ojo, argued that it would be foolhardy for the zone to vote based on promises of the Presidency come 2023. He maintained that with the benefit of hindsight and an understanding of the mischief and intrigues, which the nation’s politics is notorious for, banking on any such promise would not be a wise decision to take.

“I think it will be unwise for the South-east to vote based on a promise or understanding that the zone will produce the president in 2023. Ask yourself, do Nigerian politicians honour promises or agreement? Nigerian politics is full of intrigues, tricks and mischief, knowing so, I don’t think it would be wise for the South-east to vote based on the promise that presidency will come to them in 2023,” Adams stated.
Realistically, the Igbos may not be well positioned to get the Presidency in 2023. Look at it this way, in 2023, President Buhari will merely look on as the party zones the position to the South-west just as he is currently doing while some of his core allies face different travails in the party.

And if Atiku wins, he might desire a second term even though he had said he wanted to serve for just a term. But Nigerian politicians are wired to promise everything just to get into office and when they do, the music changes.
Another analyst put it nearly better. “Nigerian politicians rarely honour agreements. They swore to one term but when they get into office the music changes. Did Atiku not promise more than one Igbo politician to be his running mate?” he quipped.
Nigeria’s politics, just like life itself is not based on what is fair or just. The Igbos will do well to play the right kind of politics that will fetch it the zone the plum position rather than naively expect that other zones in the region would sit back and concede the presidency to them on a platter.