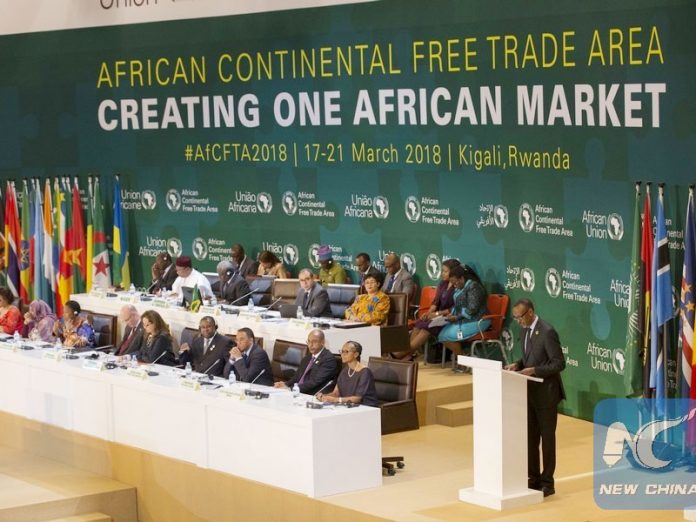 By Mamadou Biteye and Vera Songwe

Africa is growing, but not fast enough. In order for more than 400 million Africans to rise out of poverty, continued economic growth across Africa’s 54 nations will have to increase an average of 7 percent annually or more. One strong engine for growth is trade. But when it comes to trade, Africa is the least integrated region in the world, where intra-African exports were 18 per cent of total exports in 2016.

Recently, progress has come knocking—and loudly. In March, African leaders took a major step forward when 44 of 54 African nations signed the African Continental Free Trade Area (AfCFTA), the biggest trade agreement signed since the World Trade Organisation (WTO) was established. The AfCFTA brings together 1.3 billion people, and a combined gross domestic product (GDP) of more than $2 trillion. If ratified by each country, it will become one of the world’s largest trading blocs.

AfCFTA commits countries to remove tariffs on 90 percent of goods, progressively liberalize trade in services, and address a host of other non-tariff barriers, like long delays at national borders which hamper trade between African countries. Eventually, free movement of people and a single African air transport market could grow within the newly created free trade area.

First, however, Africa must navigate the largest political consensus-building effort since the formation of the African Union in 2002. Those looking to enlist support for the agreement have the tough task of demonstrating how the AfCFTA will leverage various individual markets for the benefit of multiple sectors. Agriculture is one case in point.

In agriculture, intra-African agricultural trade is particularly underexploited owing to high import tariffs, other non-tariff barriers (such as health and safety standards), low productivity, and a lack of rural connectivity.

In 2015, African countries spent about US$63 billion on food imports, largely from outside the continent. ECA’s modeling projects intra-African trade in agricultural products will be between 20 percent and 30 percent higher in 2040 with the AfCFTA in place, with particular gains in sugar, vegetables, fruit, nuts, beverages, and dairy products.

AfCFTA would provide access to markets at the regional and international levels, which would then generate state revenue, increase farmer income and expand both farmer and country capacity to invest in modernizing the sector through processing and mechanization. Ratifying AfCFTA would shore up Africa’s food security, and contribute to overall economic growth through the agricultural sector.

However, ratifying AfCFTA is not without its challenges. Success requires overcoming widespread questions among Africans about accountability. It requires overcoming fears that the benefits of the free trade area could be unevenly distributed. And it requires engaging and activating the private sector in service of the agreement while ensuring the agreement will deliver broad benefits to society, the environment, and national economies.

Make no mistake—for the agreement to reach ratification and bear fruit, the private sector must step up.

The need for education and engagement across the public and private sectors also underscores the importance of bringing together the relevant stakeholders to talk, ask questions, and build an understanding of the various points of view. That’s why the Africa Trade Forum held in Lagos, Nigeria, couldn’t come at a better time. Hosted by Nigeria’s Ministry of Trade and Investment and organized with the ECA and the African Union Commission, the Forum is the best opportunity yet to bring together representatives from across the trade divide.

The AfCFTA could transform Africa’s economy, making it competitive on a global level and unlocking the potential to create and share prosperity on the continent in a uniquely African way. But getting to ratification requires a collaborative process, and multi-sector input. The Africa Trade forum in Lagos was a major effort to bring those voices together for Africa’s future.

Vera Songwe is Executive Secretary of the UN Economic Commission for Africa (ECA), and Mamadou Biteye is Managing Director for Africa with the Rockefeller Foundation