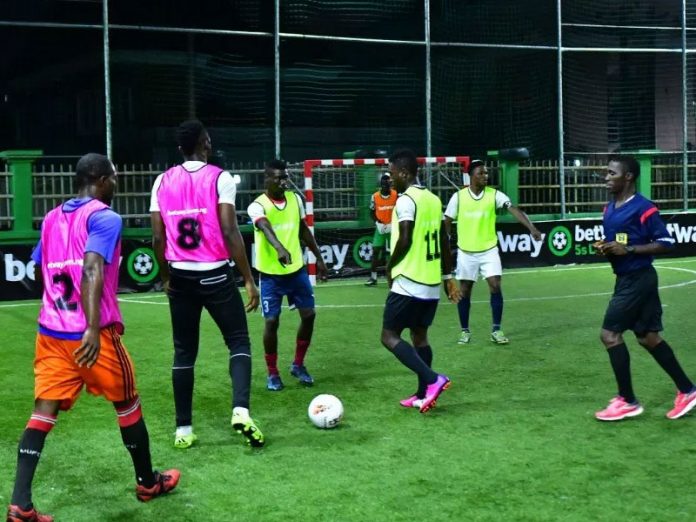 After 12 weeks of exciting football action in the Betway 5s League, last Saturday, Ikeja All-Stars defeated G12 on penalties at The Landmark Beach Front, Victoria Island, Lagos to win the NGN 1 Million grand prize. Since the start of the Betway 5’s League, the competition has helped boost the popularity of 5-a-side football in Nigeria as 24 teams took part in the games which were held across four locations in Lagos.

At the finale, the Special Eagles, Nigerian Amputee football team fresh from the Amputee World Cup in Mexico, thrilled spectators to some beautiful football, showing many why they got the opportunity to represent Nigeria and qualify for the prestigious event.

Football lovers were not left out as cash prizes and other gift items were won on the final day of the league. Excited fans participated in ball juggling competitions and showed their knowledge of football by taking part in quizzes. A football freestyle competition also held between 2 top free-stylists.

Speaking to the media at the end of the event, which had in attendance the Chief Executive Officer of the Lagos State Lottery Board, Mr Seun Anibaba, Head of Finance & Accounts Lagos State Lottery Board, Mr Adeyinka Suleman, Country Director, Betway Mr Chris Ubosi and other dignitaries. Betway’s Country Manager, Mr Lere Awokoya, said “The competition was fierce but healthy, the passion for the game was very much present throughout and we hope to spread the love deeper and wider. This has been nothing short of an awesome season and we are excited about doing more towards building sports in Nigeria”

Betway, the official kit sponsor of English Premier League side, West Ham, has been involved in many sports activities since its entry into the Nigerian betting market.