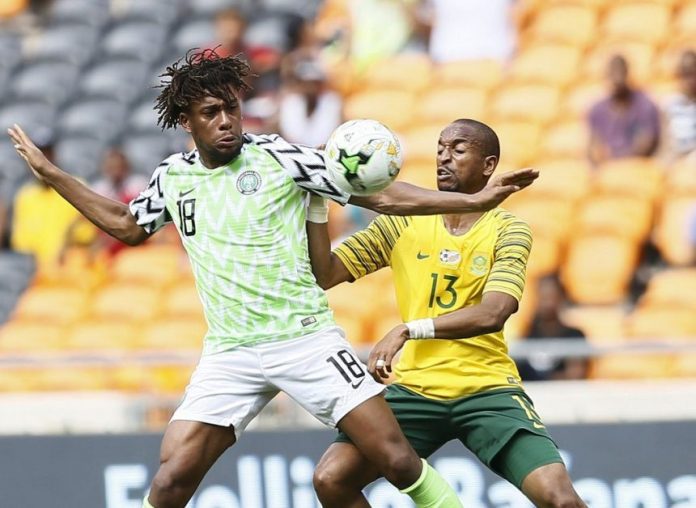 Three-time champions Nigeria flew majestically back to the biggest football houseparty on the continent after being held 1-1 by South Africa in Johannesburg on Saturday.

It was certainly not one of the classics, but the result meant only one other team in Group E (either Libya or South Africa) could end up with the same 10 points that Nigeria already have, by the of the qualification series in March 2019.

But Libya’s 8-1 defeat of their hosts Seychelles on Mahé Island would create real fear in the Bafana Bafana going into that last battle against the Mediterranean Knights in Tunisia.

At the FNB Stadium in Soweto on a sunny afternoon, Nigeria made the brightest start with stand – in Captain Ahmed Musa watching his shot held by goalkeeper Itumeleng Khune in the 6thminute, and two minutes later Nigeria had the ball in the net after a sweet combination by Musa and Kelechi Iheanacho.

But Gambian Referee Papa Gassama ruled it off-side, on the prompting of the assistant referee.

A minute later, Nigeria pushed their noses in front as Samuel Kalu, playing in an unaccustomed wing back role, outpaced Sfiso Hlanti and pulled out, only for Buhle Mkhwanazi to divert it past Khune into the net.

In the 11th minute, Bafana had a glorious chance to equalise as the irrepressible Percy Tau got behind the Nigerian defence, only to be thwarted by Kalu.

It became a ding-dong as the match gathered some vibrancy, with Captain Thulani Hlatshwayo arriving late for a free-kick and Mothiba wrong-footed, and at the other end, William Ekong’s run to a good chance from a corner was foiled and Kalu shot too high from an Ahmed Musa corner.

Bafana were level in the 26th minute though, as the nimble-footed Tau, appropriately named Man-of-the-Match, left Ekong and Omeruo in no-man’s-land and drilled a selfless pass to Mothiba, beyond a sprawling Ikechukwu Ezenwa, to slot into an empty net.

Nigeria could have reclaimed leadership in the 36th minute, but after Musa did all the work, Iheanacho’s atrocious first touch bungled the opportunity.

In the second period, both teams sought to conserve energy in a high altitude environment.

Two minutes before the hour, midfielder John Ogu’s header from another Nigerian corner was headed for the net before Themba Zwani headed it away, and 15 minutes later, Kenneth Omeruo’s lofty header from yet another corner missed narrowly.

In the 83rd minute, another big talking point surfaced when Musa ran onto a great pass and slotted past Khune, only to be deemed off-side.

Having missed the last two AFCON finals, Nigeria have now joined hosts Cameroon, Madagascar, Senegal, Tunisia, Egypt, Morocco and Uganda as the teams already guaranteed slots at the 2019 Africa Cup of Nations, to be hosted by Cameroon.

An ecstatic President of the Nigeria Football Federation, Mr. Amaju Melvin Pinnick, heaped encomiums on Nigeria’s President Muhammadu Buhari and the federal government for providing the conducive environment for Nigerian football to continue to thrive, while praising specially Governor Simon Bako Lalong of Plateau State who led the Nigeria delegation to the big match.

“This is a great day for Nigerian football. Just as it happened in the qualifying series for the FIFA World Cup, we have won the ticket to the AFCON with a match to spare. This victory is for President Muhammadu Buhari and the government and people of Nigeria. We commend the technical crew and the players, and I must praise Governor Simon Lalong who is here with his wife to support the team.

“We will begin the preparations for the AFCON immediately. As I have said several times, we do not want the AFCON ticket just to go there and make up the number, but to make a massive impact at the finals,” said Pinnick, who is also the President of the AFCON Organising Committee, aside being the 1st Vice President of the Confederation of African Football (CAF).

The Nigerian delegation is expected to fly back to Asaba, Delta State in the early hours of Sunday. The Super Eagles have a friendly international with the Cranes of Uganda at the Stephen Keshi Stadium on Tuesday evening.

South Africa, who host Paraguay in the annual Nelson Mandela Memorial Challenge in Durban also on Tuesday, must avoid defeat to Libya in Tunisia in March to qualify for the 2019 AFCON, while Nigeria have a relatively easy session at home to Seychelles. 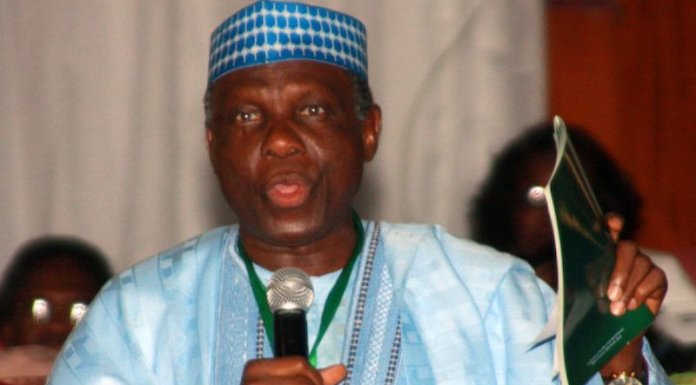