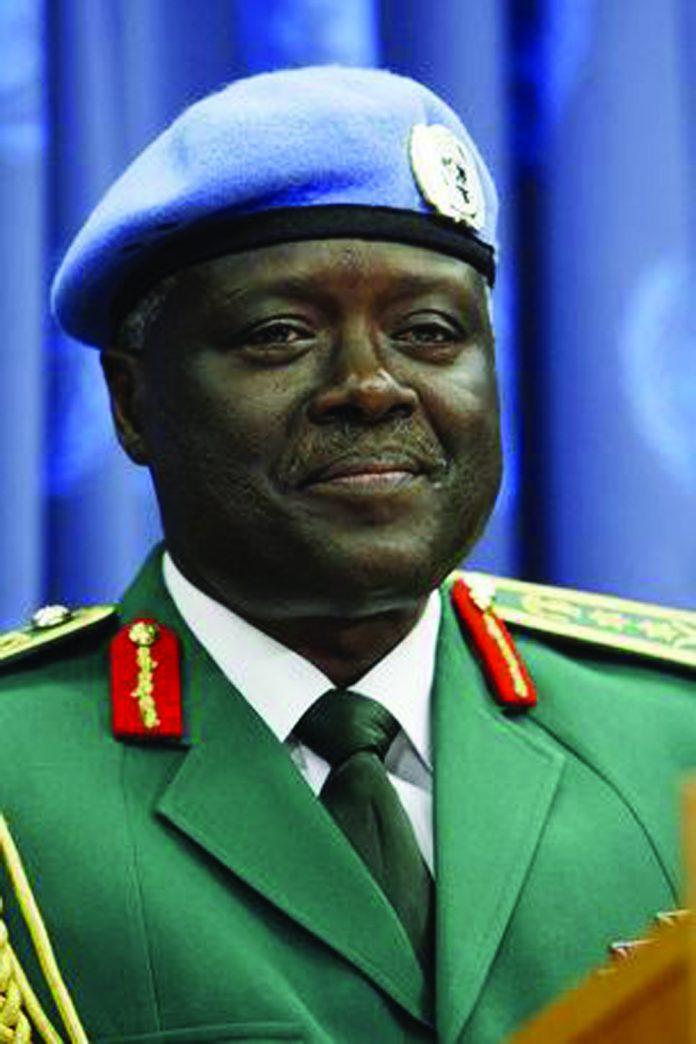 Former Army chief, Martins Luther Agwai who clocked 70 last week is an accomplished man in every field of endeavor he ever ventured into in life. He has the towering image of a giant but gently touches every being with the dove-like balm that engendered him to humanity. A man of peace who rarely applied the advantages of his strength against the weak, an intellectual giant that scored some rare strings of firsts that brought honour to his family and country; he reached the peak of his profession early in life before exiting into civil society to further his contributions.It was therefore no surprise when the crème de la crème of Nigeria and beyond gathered to celebrate him at 70 where encomiums were poured on him. Most who spoke traced the trajectory of his meteoric rise in his military career which saw world bodies asking for his services from Nigeria.

Born to a Christian family November 8, 1948 in Kaduna, he grew up in the family tradition of deep faith and was the President of Fellowship of Christian Students at Government Secondary School, Zaria. His career path started when he joined and graduated from the Nigerian Command and Staff College, then proceeded to British Army Staff College, Camberley and later, United States Army Armor School amongst others. Agwai manifested academic prowess early, making his superlative grades which stood him out when he made a distinction in his Post Graduate diploma in Public Administration at the Administrative Staff College of Nigeria (ASCON) and National Defence University, Washington DC, where he obtained a Master of Science in National Resource Strategy. At NDU, he won the Ambassadors Award for excellence in research and writing, making him the first foreigner to win the award.

A look at his career trajectory explains the respect he is accorded wherever he goes. Commissioned into the Nigerian Army in 1972, he at various times was Chief of Training and Operations and Director, Military Training at the Nigerian Defence Academy, Kaduna. Nigerian Military Adviser at Harare which coveredSouthern Africa from 1993-1996. He also was a Directing Staff and Chief Instructor at the Command and Staff College Jaji. Agwai was the Deputy Military Adviser at the United Nations Headquarters, New York and later, Chief of Army Staff before becoming the Chief of Defence Staff  among other positions.

General Martin Luther Agwai retired in 2009. During the pulling out parade, then Minister of Defence, Retired Maj-Gen Godwin Osagie Abbe said “the magnificent parade accorded Agwai is an indication that the nation is happy… the country is proud to produce a fine officer and a gentleman who gave a good account of himself. I am expressing the Commander-in-Chief’s pleasure,President Umaru Yar’Adua for the service he had rendered to his country and beyond and that is what an officer should be”.

Former President Olusegun Obasanjo on Agwai’s 70th birthday anniversary described him as a clever officer, adding, “During my watch, Agwai moved from being the Chief of Army Staff to be the Chief of Defence Staff. When I still believed we needed him, the international community believed they needed him more than we did. I had to reluctantly let him go.”

The former president noted that the celebrator performed creditably to the extent that he became the adviser to Secretary-General of the United Nations, on military matters.

Obasanjo also described Agwai as an icon as far as military service was concerned in Nigeria and in the international community.

“He is a man of his people, an intellectual in his own right. When we have leaders like Agwai, we should count ourselves lucky. We should squeeze them and get the best from them. He has always made himself available any time. We need to make use of these qualities in Agwai,” Obasanjo who is austere in his praises said.

He also commended Agwai for the good work he had been doing in supporting democracy, both within and outside Nigeria.

Looking intently at him, he said, “You have been recorded by history as a Nigerian who embodies all the highpoints of our national achievements.”

Speaking on behalf of the friends of the celebrator, Justice Stephen Makeri, also described Agwai as a global icon.

“May you continue to strive in all you want,” Makeri prayed.