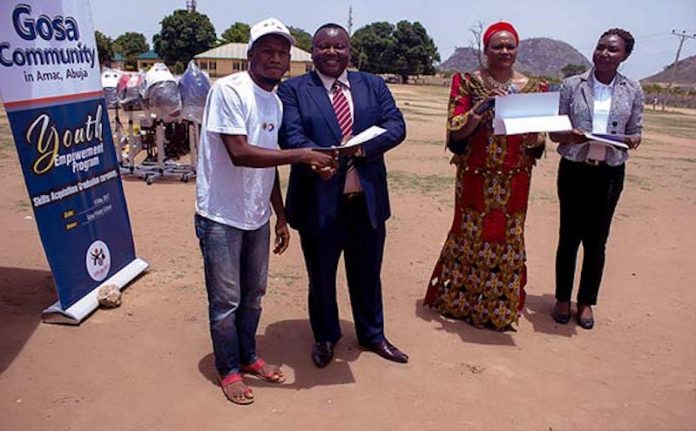 Totalprenure, a subsidiary of Total Group of Companies and Aids for Women, Adolescents and Children International Organisation (AWACIO), a non-governmental organisation have empowered 44 youths in Niger State after a six week intensive training.

The youths who were representatives of all the local government areas of the state were trained in different skills which include the making of shoes and bags, soap and room fresheners, perfumes, as well as tailoring, phone repairs and hair dressing.

Nnadi, who was represented by the Chief Executive Officer of AWACIO, Dr. Claudia Okeke, said there is need to reduce poverty and this is made possible through youth empowerment programmes which are one of the corporate social responsibility initiatives of the organisation.

Okeke called on the Niger State government to key into the programme and take ownership by training as many youths as possible in entrepreneurial skills towards empowering themselves and others.

She revealed that the criteria used in the selection of the beneficiaries who all got starter kit were punctuality, commitment and merit among other qualities as many people had indicated interest to be part of the training.

“All doors are open for interested donor agencies. We call on the Niger State government to take ownership of the programme which will serve as a stepping stone for other programmes. Trainees have been given starter packs and we are hoping that one day, they will become self-reliant and become employers of labour.”

One of the trainers, a nurse and midwife by profession, Ms. Lois Adamu, who loves to be an entrepreneur, said there is nothing to be compared to being one’s own boss.

While commending the federal government for the inclusion of entrepreneurial studies in the basic school curriculum, she said more needs to be done especially in differentiating between skills acquisition and entrepreneurship, as the former must come before the latter and they should be seen as two separate entities.

Adamu, who had trained five trainees on perfumery, said the making and use of perfumes, as well as the pleasant scents are divine and are not affected by economy as individuals in the trade are at liberty to determine the price of their products.