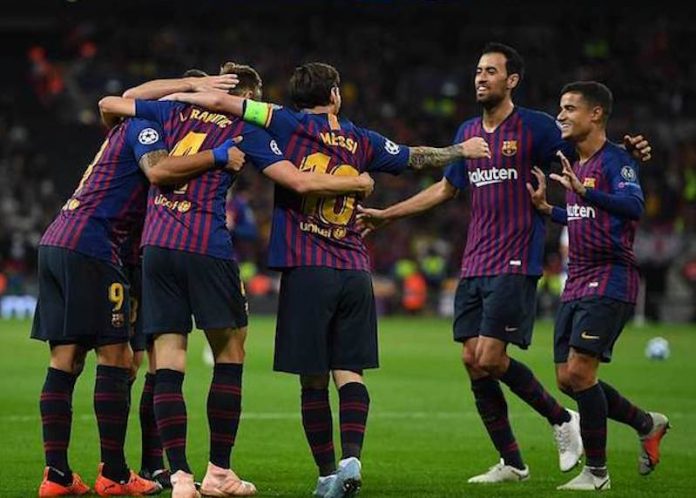 Barcelona lost a home league match for the first time in two years as the Spanish champions were beaten 4-3 by Real Betis’s expert display at the Nou Camp.

Junior Firpo gave Betis a deserved lead after 20 minutes, before veteran Joaquin made it two before the break.

Arturo Vidal’s tap-in gave Barca hope, but Sergio Canales got the away side’s fourth, before a Messi consolation.

Ernesto Valverde’s side remain at the top of La Liga, one point ahead of Atletico Madrid and Alaves. Fourth-placed Espanyol can move level on points with victory at Sevilla later on Sunday.

The hosts had Ivan Rakitic sent off for a second yellow card with eight minutes left when trailing 3-2 and were powerless to match a determined and clinical Betis side, despite Messi’s two goals on his return from a fractured arm suffered three weeks ago.

Barca’s previous home league defeat came on 10 September 2016, when they lost 2-1 to Alaves.

Betis had lost on their past eight visits to the Nou Camp and had not won there for more than 20 years.

But they came away with three points that lifts them up to 12th in the table courtesy of an impressive display built on adventurous counter-attacking and smart play in possession.

editor - October 17, 2021 7:32 am
64
SIMON KOLAWOLE! BY SIMON KOLAWOLE On Monday, Vice-President Yemi Osinbajo might have made his boldest pitch yet for his expected presidential bid in 2023. Speaking...