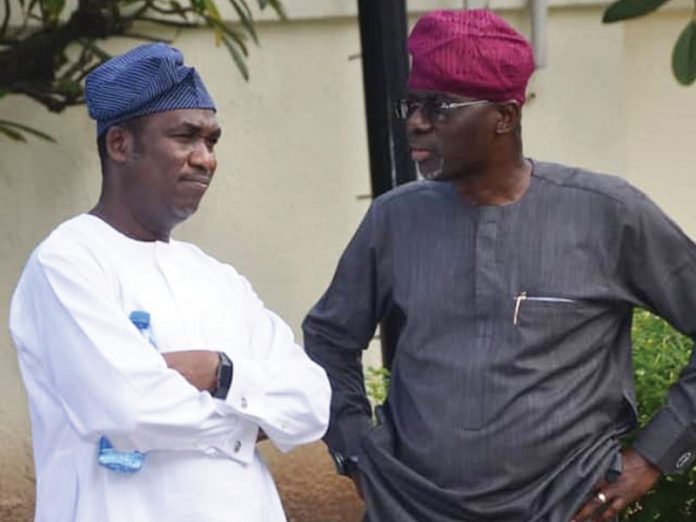 The selection of a former three-time commissioner in Lagos State, Dr. Obafemi Hamzat, as the running mate to Babajide Sanwo-Olu, governorship candidate of the All Progressives Congress in the state, makes political sense as Hamzat is a true-blue ally, writes Olaseni Durojaiye

The choice of Dr. Obafemi Hamzat as the deputy governorship candidate of the All Progressive Congress (APC) in Lagos State ticked a handful boxes considered valid and strategic in terms political calculations, thus, the conclusion that he is a worthy ally for the party’s governorship candidate, Babajide Sanwo-Olu in the election billed for next February.

Besides, his choice will unite the major political groups within the party, making it very formidable going into the election even as it is seen as a partial compensation for the Lagos East Senatorial zone where the incumbent governor, Akinwunmi Ambode comes from.

Indeed, Hamzat comes to the table with many pluses. Some of these include huge political capital, the understanding of the inner workings of governance in the state and a proven capacity and high level competence. Some of the foregoing explains why many pundits concluded that he aptly complements Sanwoolu, the candidate.

Announcing Hamzat’s pick last Sunday, Chairman of the party in the state, Alhaji Tunde Balogun, said Hamzat was selected after wide consultations by the apex decision-making body of the party with other important stakeholders. Describing him as a competent hand, he said the party had no doubt about the complementary role he would play in helping Sanwoolu move the state forward.

On a personal note, Sanwoolu and Hamzat confessed to a friendship of over 15 years. Thus, while commending the choice of Hamzat, the Sanwo-Olu said “Dr Obafemi Kadiri Hamzat and I have been players in the same political matters for many years.

“We have been friends and brothers for close to two decades and he is a man of deep intellectual knowledge. He is a man with a high level of integrity. He is competent and I know he is going to help greatly to deliver the Lagos of our dream. With a technocrat like Hamzat, we will take Lagos to the next level,” he said.

Observers see Hamzat as the best choice the party could have made in the prevailing circumstance. Party insiders told THISDAY that he was Tinubu’s initial choice to succeed Fashola in 2014, adding that he also had Fashola’s blessing at the time, but was dropped in favour of Ambode after a frontline royal father in the state preferred the latter.

According to the source, the very influential Oba (names withheld) based his opposition to him on the fact that his father had also become an Oba in Ewekoro area of Ogun State.

The issue generated controversy at the time with the first Military Administrator of Osun State, Maj. Gen. Leo Ajiborisha weighing and insisted that the Hamzat family was originally from Epe and had dropped Ajiborisha for Hamzat on religious grounds.

Ajiborisha, in an October 10, 2014 interview published in the PM News insisted that “He was staying with one of our respectable Muslims and politicians, Chief Mufutau Badmus. He was very rich. He sent Oba Olatunji Hamzat to Koranic School and registered him in Native Authority School. Chief Badmus decided to remove Ajiborisha from his name because as a devout Muslim, he could not send child-bearing Ajiborisha to school.

“He said Oba Olatunji would only bear Hamzat. That is how he stopped bearing Ajiborisha officially. Amudat Kehinde Hamzat is the name of Dr. Obafemi Hamzat’s mother. Her name would have been Amudat Kehinde Ajiborisha if the surname was not dropped.

“Hamzat is not the first person in our family to change his name. For instance, the head of my family changed his name to Ajibo-Oluwa because they do not want to be associated with idolatry in the same way Chief Badmus changed Oba Olatunji Hamzat,” he explained.

Though the scion of the Hamzat political dynasty, those in the know said his initial entry into politics had nothing to do with his father. One source insisted that Tinubu actually head-hunted him from the United States, where he was based during his (Tinubu’s) first term as governor of Lagos State.

As the story went, their paths crossed in the far-away United States of America, when Tinubu’s administration took a proposal to the US firm, where the younger Hamzat was working at the time. Fate further favoured him as he ended up in the team that evaluated the proposal during which he was said to have given a very impressive account of himself.

Impressed by his contributions during the proposal defence, Asiwaju was said to have engaged him afterwards. The sources stated that it was during the post-proposal defence conversation that his paternity became known to the APC national leader, who subsequently poached him and got him employment at Oando Plc. Tinubu later brought him into the cabinet during his second term as governor.

Before his eventual selection, he had indicated his interest to vie for the party’s governorship ticket alongside the incumbent governor, Akinwunmi Ambode and the eventual candidate, Sanwoolu. Many at the time believed he stood a good chance only for him to step down then and publicly declared that he was doing so in favour of Sanwo-Olu.
Many saw the move as a realignment of political forces to checkmate Ambode and predicted that he was going to emerge as Sanwo-Olu’s running mate.

Those who hailed his choice argued that it was in line with global best political practice for scions of a political dynasty to be thrust into political limelight either through appointive or elective posts. Those who contended so cited Indira Gandhi and Rajiv Gandhi, Chief Olusola Saraki and Senate President, Bukola Saraki, the Kennedy political dynasty in the US among others.

In the case of the younger Hamzat, his father, Olatunji Hamzat is an influential grassroots politician in the state. He had served as a member of the Lagos State House of Assembly and also as a Commissioner for Transportation in the state between 1979 and 1983.

At the advent of the current democratic dispensation, he rose to become Vice-Chairman South-west of the Alliance for Democracy (AD) and later became the Lagos West Senatorial District leader of the Action Congress, an elder statesman in the Action Congress (AC). He remains the de facto leader of the Justice Forum, arguably the second strongest political group within the APC in Lagos.

Those in the know insisted that beyond the family name, “He comes highly recommended,” adding that, “he is an egghead and a performer; if not he couldn’t have worked in the Babatunde Fashola cabinet for eight years given Fashola’s passion for performance and dedication to duty.”

In August 2005, Hamzat was appointed Commissioner for Science and Technology during the tenure of Asiwaju Bola Ahmed Tinubu. He retained the position when Governor Babatunde Fashola assumed office in 2007.

As Commissioner for Science and Technology, he midwifed the adoption and deployment of Oracle, a modern technology-based application in the state’s ministries, thus changing the face of data and record-keeping in Lagos, which eliminated all forms of sharp practices in the state’s civil service, including cases of ghost workers. Governor Fashola later appointed him Commissioner for Works and Infrastructure at the beginning of the second term in office.

According to Wikipedia, the younger Hamzat “graduated from the University of Ibadan in 1986 with a degree in Agricultural Engineering and subsequently furthered his studies at home and abroad, resulting in both MSc in Crop Processing Engineering (1988) and PhD in System Process Engineering (1992).

Sequel to this, he garnered about two decades of work experience in several organisations including the City of New York, RTP Consulting Services, Columbia University, Merrill Lynch Inc, Morgan Stanley and Oando Plc.”

Multiple sources contended that his pick signposts a return to the continuity agenda that Fashola marketed to Tinubu towards the twilight of his administration. According to those in the know, Fashola had pleaded with Tinubu to pick his successor from within his cabinet on the account that they were familiar with the state’s developments and certain to ensure continuity.

One of the sources stated that “That explained why Fashola backed him against Ambode at the time and went on to appoint him a ministerial aide when President Buhari appointed Fashola the Minister of Power, Works and Housing.”
Without equivocation, Hamzat is one choice that not only complements the Lagos APC ticket for sheer political balancing but certainly a worthy developmental ally that could reset the governance of the state.