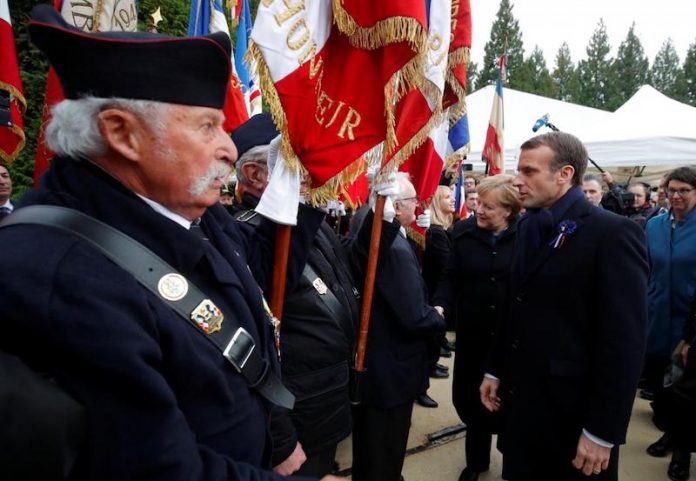 World leaders are attending a ceremony in Paris commemorating the centenary of the Armistice that ended World War One.

US President Donald Trump and Russian President Vladimir Putin are among those gathered for a service beneath the Arc de Triomphe.

French President Emmanuel Macron and dignitaries marched to the arch in the rain, under black umbrellas, while church bells tolled through the city.

Many other events have been taking place around the world.

Speaking at the commemoration, Mr Macron said that “during these four years of fighting Europe nearly committed suicide”.

About 70 world leaders have gathered in the French capital for remembrance events.

Mr. Macron is leading the main event of the centenary – a sombre commemoration at the Tomb of the Unknown Soldier, a memorial to France’s fallen under the Arc de Triomphe.

Just before the leaders assembled, a topless female protester with the words “fake peacemaker” written on her chest came within a few metres of Mr Trump’s motorcade before being apprehended.

On Saturday, Mr Macron and Mrs Merkel visited the town of Compiègne in northern France. They signed a book of remembrance in a railway carriage identical to the one in which the 1918 Armistice was sealed.

President Trump, however, caused controversy by cancelling a trip to a cemetery for the war dead because of bad weather.

A group of around 50 activist organisations plan to hold a demonstration in Paris later on Sunday in protest against the US leader’s visit.

In Australia, a ceremony was held at the National War Memorial in Canberra, while in Adelaide an aircraft dropped thousands of red paper poppies.

In New Zealand, a gun salute took place in the capital, Wellington.

And in India, memorials were held for the 74,000 troops who died fighting on the other side of the world. The main European ceremony will be in Paris.

Meanwhile in the UK, a series of special events is being held to mark the end of the 1914-18 conflict.

For the first time, members of the public chosen by ballot will pay their respects at the national memorial in Whitehall, central London.

During his speech in Canberra, Australian Prime Minister Scott Morrison spoke of the importance of remembrance, saying people need “to learn from the past so that we can better navigate the changing currents of our own times, for our own children, and for the next generations”.

In New Zealand, the traditional two minutes of silence at 11:00 were followed by a 100-gun salute on the Wellington waterfront, while church bells rang across the country. Cars and ships blared their horns and emergency services sounded their sirens.

“The carillon and roaring chorus has recaptured the wave of spontaneous jubilation and hope which swept New Zealand when news of the Armistice broke,” Prime Minister Jacinda Ardern told crowds at the National War Memorial in Wellington.

In India, where 1.3 million troops from the former British colony joined the allied war effort, a Scottish piper played at the Delhi War Cemetery. The poppies that have become a poignant emblem of the bloodshed in Europe lay mingled with bright, symbolic marigolds.

“This was a war in which India was not directly involved, yet our soldiers fought world-over, just for the cause of peace,” Prime Minister Narendra Modi tweeted on Sunday.(BBC)