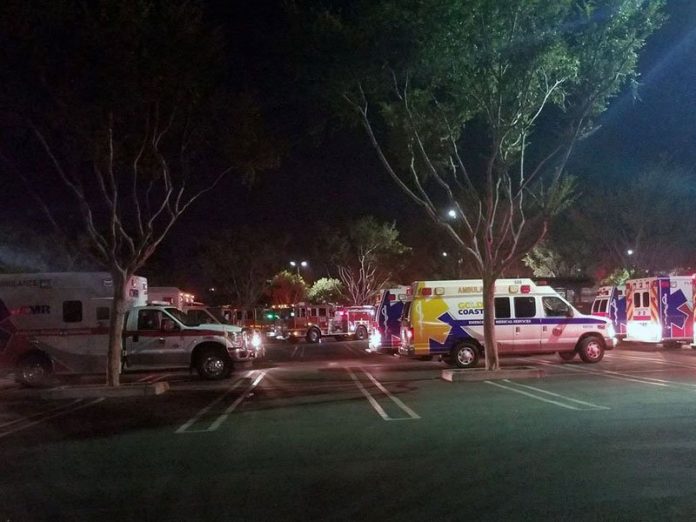 A gunman killed 12 people, including a police officer, when he opened fire in a country music bar packed with college students in California, officials and witnesses said Thursday.

Police said the gunman was found dead inside the bar on the outskirts of Los Angeles although it was not immediately clear if he was killed by officers or shot himself.

The local sheriff said that around a dozen other people had been injured. He said the motive of the shooting and the identity of the gunman were not yet known.

It was the second mass shooting in America in less than a fortnight.

Witnesses said that the gunman, who was bearded and wore a black trenchcoat and glasses, threw several smoke grenades inside the Borderline Bar and Grill before he started shooting at around 11:20 pm on Wednesday night.

“It’s a horrific scene in there. There is blood everywhere,” Ventura County Sheriff Geoff Dean said at a pre-dawn press conference.

“We have no idea if there is a terrorism link to this or not. As you know, these are ongoing investigations and that information will come out as soon as we are able to determine exactly who the suspect was and what motive he might have had for this horrific event.”

“Nothing has led me to believe or the FBI there is a terrorism link here. We certainly will look at that option.”

Dean said that the dead police officer, who was named as Ron Helus and had been on the force for 29 years, was among the first on the scene.

“They found 11 victims that had been killed,” said Dean of the first response unit before detailing that the death of Helus brought the toll to 12, not including the gunman.

Matt Wennerstron, a 20-year-old college student and regular at the bar in the upscale Thousand Oaks suburb, said the shooter fired a short-barreled pistol that apparently had a 10-15 round magazine.

“It was just semi-automatic, as many shots as he could pull,” he told journalists.

“Then, when (he) started to reload, that’s when we got people out of there and I didn’t look back.”

He said he and others smashed their way out of the bar onto a balcony and then jumped down to safety. “One bar stool and straight through a window,” he told reporters.

Jasmin Alexander, who was part of a group of around 15 friends at the bar, said there was chaos and confusion inside when the shots first rang out.

“It was a normal Wednesday. We were just at the bar, having fun, dancing,” she told reporters after escaping the shooting.

“All of a sudden we heard the ‘bang, bang’ of the gunshots and it just started going crazy and people were pushing.

“We thought it was a joke, we didn’t take it seriously at first .. because it sounded like firecrackers and everyone just dropped down to the floor.”

President Donald Trump said on Twitter that he had “been fully briefed on the terrible shooting“.

“Law Enforcement and First Responders, together with the FBI, are on scene. 13 people, at this time, have been reported dead. Likewise, the shooter is dead, along with the first police officer to enter the bar”, he wrote.

It was the latest chapter in America’s epidemic of gun violence and came only 10 days after a gunman killed 11 worshipers at a synagogue in Pittsburgh.

Last year a country music festival called Route 91 in Las Vegas was the scene of the worst mass shooting in modern US history. A gunman shooting from the 32nd floor of a hotel and casino with high power weapons killed 58 people.