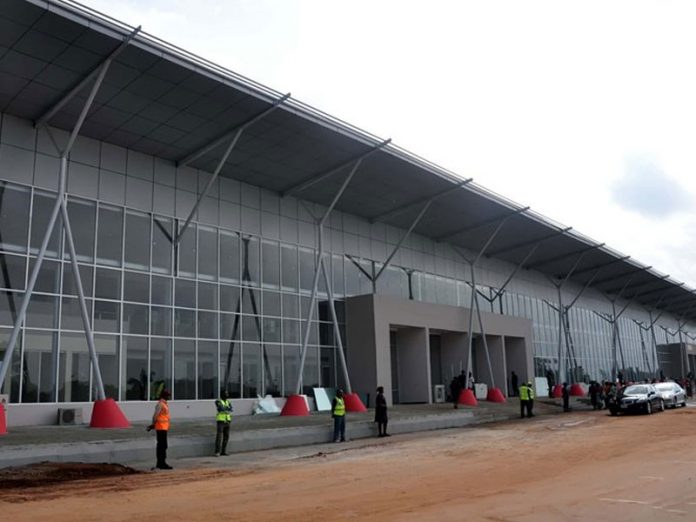 Some pilots operating flights to the Akanu Ibiam International Airport, Enugu recently called the attention of concerned authorities to the dilapidated nature of the runway, which they described as death trap. Chinedu Eze writes on the need for collaboration between the Enugu State government and the Federal Airports Authority of Nigeria to improve facilities at the airport

When the federal government designated Enugu as an international airport in 2013 and it recorded its inaugural flight to Addis Ababa, the people of the south-east were elated.

In fact, one prominent minister from the zone shed tears of joy to see that the airport, after many years of clamour, was approved to operate international service.

Industry observers then gave kudos to the then Minister of Aviation, Senator Stella Oduah, who put all the efforts to ensure that the efforts made towards that by her predecessors came to fruition.
Industry stakeholders from the south-east zone had pointed out that it was surprising to note that when Muhammadu Buhari administration took over in 2015, the Minister of State, Aviation, Senator Hadi Sirika, showed similar passion to see that critical projects were upgraded at the airport, despite the fact that Enugu was not one of the catchment areas of the ruling party.

THISDAY learnt that the new government continued work on the international terminal project lulled by technical and funding challenges.

Work was started on the problematic runway to re-channel underwater that settled immediately under the runway that made it to break down so often.

The federal government through the Federal Airports Authority of Nigeria (FAAN), wanted to upgrade not only the terminal facilities at the airport, but also the critical infrastructure on the airside, like the runway, airfield lighting, the approach light and also the instrument landing system (ILS) so that flights could operate in the night at the airport.

When the first international flight took off from the Akanu Ibiam International Airport, Enugu on August 13, 2013, it was expected that five years later the airport would be servicing at least three more international carriers. This was because industry market analysts believed that the airlines would attract international passengers from different parts of the south-east and south-south regions of the country who would spend less than two hours to the airport and board their flights rather than travel about six hours to Abuja or Lagos to travel overseas.

But after the excitement that trailed the first flight by Ethiopia Airlines, which has continued to maintain that route, no other airline has started operation from the airport.

THISDAY spoke to the Manager of Enugu Airport, Mr. Mgbemene Orji, who explained why the airport has not attracted more international carriers. Orji said the airport cannot operate 24 hours because of structural deficiencies at the airport, but for now it could only operate from 7:00 am to 7:00 pm daily.

The Manager said there is no enough water for firefighting because it is difficult to dig borehole at the airport due to coal deposits. Currently the airport management buys water from tankers every day, but this is not enough to provide adequate fire cover for large body aircraft or higher number of aircraft traffic.

“Currently we are building overhead tank but it is nothing if we cannot source underground water, which will be in adequate supply to meet the fire cover needs,” Mgbemene told THISDAY recently.
He explained that there are no approach lights, which are usually located at the two ends of the runway, about four kilometers before the runway.

These are lights that guide the aircraft to the runway, especially in the night.
“On one side of the approach to the runway, there is Orie Emene Market, which must be relocated so that the approach light can be installed. The other side of the approach is located at Abakpa Nike area of Enugu.
“The day FAAN engineers wanted to install lights at that area, the indigenes said they were not compensated for the land and therefore would not allow the installation.”

The Airport Manager also disclosed that there are two masts, one owned by Enugu State Broadcasting Service (ESBS) and the other by the Nigeria Television Authority (NTA) at the Abakpa Nike end of the runway. These masts obstruct flight approach, necessitating that immediately the aircraft takes off it must bank right to avoid collision with the masts. This makes flying to Enugu airport more difficult during the Harmattan.

THISDAY also learnt that more international airlines would be operating to Enugu if these obstacles are removed.
The benefits of 24 hours flight operations to Enugu include more jobs for the citizens, people travelling at their convenience and also more businesses coming to the city and environs.

FAAN believes that the Enugu State government could help to solve these problems because it would be of immense benefit to the state and its people when more airlines begin to fly to Enugu, popularly known as Coal City.
For example, Enugu state government can settle the host community at the Abakpa Nike area so that the approach light can be installed by compensating them for the land even engage them to protect the installation and the state government can also relocate the Orie Market in Emene.

Collaboration
The Managing Director of the Federal Airports Authority of Nigeria, Saleh Dunoma, had met with the governor of Enugu state, Ifeanyi Ugwuanyi and enumerated the above problems to him.

He explained to the Governor that FAAN was willing to revamp the safety critical infrastructure at the airport, but lacks the political will and the jurisdiction to move residents from the runway area or pipe water from the Ekulu river to the airport, noting that these are responsibilities of the state government.

Dunoma therefore, appealed to the state governor to support the agency to upgrade the airport.
Earlier this year, Sirika after inspecting facilities at the airport also met with the governor and had highlighted the challenges.
Sirika had also informed the governor that FAAN had acquired airfield lighting and approach light to install at the airport if he could remove the aforementioned obstacles.

Edo Example
Recently the Governor of Edo state, Godwin Obaseki confirmed that it has been collaborating with the Nigerian Airspace Management Agency (NAMA) to provide ILS to the Benin airport so that flights can lead at the airport in the night. Obaseki did not collaborate with NAMA alone; his government also worked with other aviation agencies to ensure that infrastructure at the Benin airport is improved.

Incidentally, the day the Sirika inspected facilities at the Enugu airport he also flew to Benin airport and also inspected the airport. Just as he met the Governor of Enugu airport and informed him the ways he could help to improve facilities at the airport after the inspection, Sirika also met Obaseki and had tabled the issues with Benin airport to him and also sought his support.

Since then, the Edo state government and the aviation agencies have been working to provide essential amenities at the airport.

Runway
THISDAY gathered that the only commitment the Enugu state government has since made was the establishment of a committee to look into the problems raised by the Minister and Managing Director of FAAN.

Recently when the governors of south-east states raised the alarm about the state of the runway of the airport, the Director General of the Nigerian Civil Aviation Authority (NCAA), Captain Muhtar Usman, had led a team from Lagos to inspect the runway and other safety critical facilities at the Akanu Ibiam International Airport, Enugu.
Usman, who was then accompanied by FAAN’s Director of Engineering, Salisu Daura, said the runway needed resurfacing instead of patchworks, but noted that if the state government had one what was needed, as the runway is being resurfaced those other critical facilities like airfield lighting would be installed, adding that such facilities were not extended when the runway length and width was expanded to take in bigger aircraft.

Daura made it clear that all the equipment for the approach light and airfield lighting had been procured but they could not be installed because the state government could not clear the places where the facilities and equipment could be installed.

Daura reiterated at the meeting that FAAN was willing to pipe water from Ekulu Rivers at its own expense to the airport, if the state government could give approval for FAAN to source the water.

Stakeholders
Various opinions are of the view that the Enugu state government and the governors of south-east states may not appreciate the importance of the facility to the people of the region.

Many businessmen and women in different parts of the zone travelled and still travel out of Nigeria through that airport.

A renowned pilot and industry investor who is also an indigene of the state, told THISDAY, “It is quite obvious that state governments in south-east, and Enugu state government in particular, do not appreciate the importance of Enugu airport to the region.

“Enugu airport being the only international airport in the region is at the verge of total collapse, and for avoidable reasons if the host state understands and appreciates the importance.

“Though it is very obvious the current government in Enugu has no clue to its responsibility when it comes to infrastructural provisions.”

He said the corresponding support the Ministry of Aviation and its agencies and particularly FAAN and NAMA required of Enugu state government have never been attended to, even when the agencies have severally made those requests.

“If the immediate past government in Enugu had displayed this amount of lethargic and careless attitude towards FAAN, the designation of Enugu Airport as an international one would have been a mirage; but no, Enugu had a governor who knew the importance of such enablers of realistic developments to the region and rallied together all the government agencies; Ministers, Parliamentarians and all, to achieve what we know today as Akanu Ibiam International Airport Enugu.

“What would it cost a serious minded state government to move FM mast; persuade or compel villagers to give way to navigational aid installations and even encourage FAAN to resurface the airport runway that has been a nightmare to aircraft pilots for some time now?

“Too bad federal government cannot come all the way from Abuja to spoon feed a region: the people from that region led by a governor they had put in office would have to be the road pointer to development that will change their fortunes,” he also said.