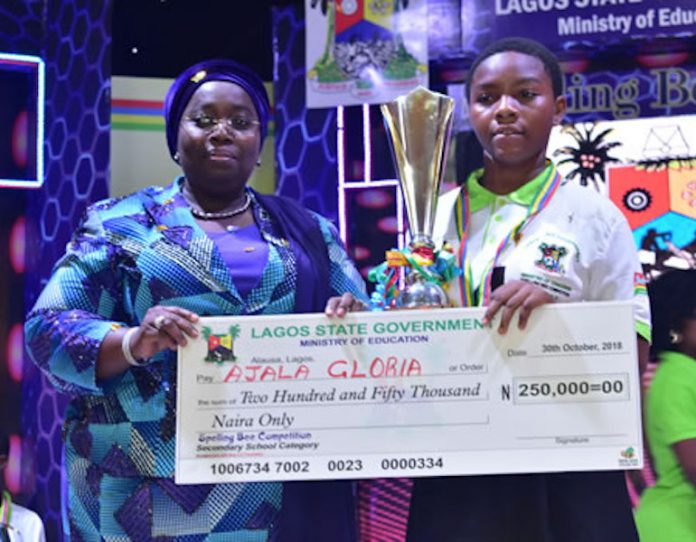 A student of Lafiaji Senior High School, Lagos, Miss Gloria Ajala has emerged the winner of the Spelling Bee Competition introduced in 2001 by the New Era Foundation to encourage academic excellence among students. She was awarded scholarship, as well as the star prize to govern the state for a day.

In her remarks, the Deputy Governor of Lagos State, Dr. Oluranti Adebule congratulated the champion, saying that as it is the usual practice, her administration will award the one-day governor scholarship to pursue any course of her choice in any university in the country.

She said the one-day governor and her ‘cabinet members’ will also attend a cultural exchange programme in Finland, while promising that the state will continue to enhance teaching and learning.

According to her, like previous editions, this year’s spelling bee competition was educative and competitive; and produced a new set of winners in the primary and secondary categories to the delight of all interested parties.

Adebule expressed delight about the performance of the competitors at the grand finale, saying, “the competition has experienced improvement in the areas of presentation and vocabulary development. The improvements were the result of the various policies and programmes put in place by the administration to encourage learning and the spirit of competitiveness which has led to the winning of many awards and laurels in various competitions.”

She listed some of the awards to include the best performing and winning state in the National ICT Olympiad; first prize in the grand finale of this year’s PZ Cussons Chemistry Challenge; winner of the 2018 NNPC national quiz competition state finals.

“Also, our students emerged the first, second and third positions at the regional finals of the World Robot Olympiad (Nigeria).”

The Permanent Secretary, Ministry of Education, Mrs. Adebunmi Adekanye said the competition has become the most interesting and keenly contested competition among students of public schools

She said the prestige and privileges that come with winning the spelling bee contest has been a great motivating factor, while the competition has helped a lot to improve the spelling skills, oral and written English of students and teachers.