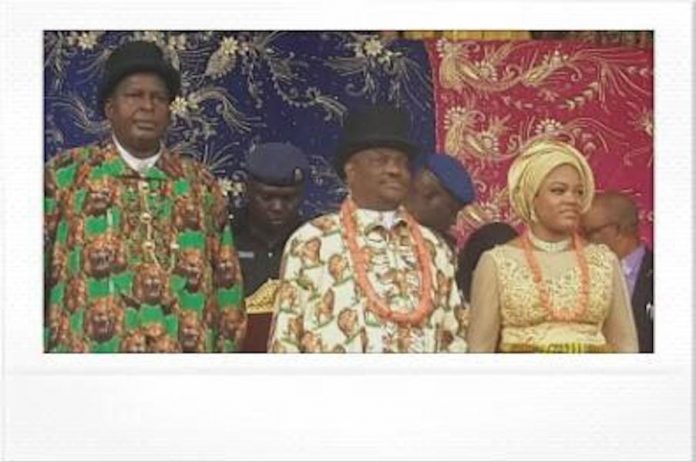 Jonathan Eze writes that the 2018 National Festival of Arts and Culture, which recently held in Port Harcourt, Rivers State, is one memory that would linger on the mind of participants as it was an avenue to rediscover the power of Nigerian arts and culture as a unifying force

Although the polity and economy rather than uniting the country have succeeded in further delineating it, the potency of arts and culture was again brought to the fore as a unifier at the recently concluded 31st edition of the National Festival of Arts and Culture (NAFEST). Hosted in Port Harcourt, also known as the Garden City in Rivers State, the festival was curated by the National Council of Arts and Culture (NCAC) and was themed “Nigeria: Our Festivals, Our Heritage’’.

Although unity in diversity seems a tall dream and an uphill task, especially in a heterogeneous entity called Nigeria, the recent festival was a pointer to the fact that in arts and culture lies the future of the country’s unity that has eluded it since independence.

The plot was set and all the theatrical props well positioned at the Sharks Stadium in the garden city of Port Harcourt. For the festival, the city wore a different look- it was both colourful and theatrical as the country’s culture, creative arts and performances were on display during the week-long NAFEST.

Traditional wrestling, dance drama, tales by moonlight, Ayo competition, traditional folklore were some of the activities that took center stage at the fiesta that attracted thousands of participants from 18 states of the federation.

Besides that, there was a roundtable on entrepreneurship at the Obi-Wali International Conference Center, a dance drama and an academic aspect was introduced to it, a children’s essay writing/crafts competition.

States that participated in the event displayed splendid cultures and dances while the 23 local government areas of Rivers also displayed their rich culture and tradition. Some youths spiced up the event with breath-taking callisthenic displays that thrilled spectators.

One of the highlight of the festival was the food fare. Lovers of traditional cuisines got a full dose of entertainment and performances. The man that has activated this cultural resurgence, and enlivened the near comatose art and culture sector into a burgeoning enterprise that is positively adding value to the national economy is no other person than Mr. Segun Runsewe, the NCAC DG. Filled with gratitude at the success of the ceremony, he described the role of Nigerian cuisines as a unifier.

He advocated for greater appreciation of Nigerian food during the cuisines competition held at the Rex Jim-Lawson Cultural Centre.

Addressing several states from across Nigeria who participated at the food fare by displaying lots of mouthwatering traditional food, drinks and snacks, Runsewe said the time was right for Nigeria to start exporting her local delicacies to the rest of the world.

He said the essence of the competition was to celebrate Nigerian food, which according to him is richer, healthier and more nourishing than the processed food we import.

Speaking further, the NCAC DG said efforts must now be put in place to ensure better packaging of our indigenous food and snacks for export which will translate to more foreign exchange, while improving the local economy and empowering Nigerians.

He commended the states for travelling all the way to Rivers to showcase their traditional foods for Nigerians to appreciate and savour, noting that the host state has proven to be indeed peaceful as against the falsehood peddled in some quarters that it is unsafe.

Runsewe affirmed that the peace and tranquility in Rivers earns it a seemingly perpetual hosting right to virtually all international and national events, adding that outside Lagos and Abuja, Port Harcourt enjoyed the highest air traffic and hotel patronage.

An elated Governor Nyesom Wike who showcased his dancing skills, flagged off the event amid pomp at the Sharks Stadium, Port Harcourt. Wike, dressed in beautiful Rivers attire, said the festival would serve as a unifying force for Nigeria. He noted that NAFEST provided a platform for the states to make the most of the country’s culture, adding that culture empowers humanity by improving inter-personal relationships.

He said: “Whether we agree or not, our diversity is what defines and binds us as a nation under the glorious sun. Although our tribes and tongues may differ, we are a nation bound by a common destiny and firmly glued together by the spirit of brotherhood, cultural harmony, and inter-ethnic solidarity instead of discord, tribalism, nepotism and sectionalism.

“What is imperative, therefore, is for us to take full advantage of the innate strength in our diversity together, with our incredible human and natural resource endowments to build a just, united and prosperous country for the present and future generations.”

Wike also restated that the essence of the festival was to promote national peace, unity and cohesion.

Also, Mrs. Tonye Briggs Oniyide, the state Commissioner for Culture and Tourism, said that Rivers was fully prepared for the festival, hence the success they recorded.

The Chairman of the event, Chief Ferdinand Alabrabra, said that Rivers would always remain the choice of all major national events because of its strategic peaceful nature.

In all, Wike and the Director-General, agreed that culture remains Nigeria’s biggest asset in enthroning sustainable peace and unity among all Nigerians irrespective of ethnic, religious or political divides.

Wike added that Nigerians must now come together and use culture as a rallying point to promote peace and unity in all parts of the country noting that every state is blessed with very rich art and culture adding that Rivers has the capacity to keep hosting NAFEST every year.

The free skill acquisition component of the 2018 edition of NAFEST was another feature that cannot be ignored. The programme received a major boost with over 900 youths who volunteered to acquire various skills during the course of the event in Rivers State.

No doubt, the focus on building capacity and equipping youths with several skills to promote self -sufficiency and entrepreneurship was a brilliant addition. Youths acquired skills in the areas of soap production, bead making, fashion design, shoe manufacturing, makeup, art and craft design and more.

Runsewe reaffirmed this position while addressing both trainers/trainees and invited guests at the event.

He said: “The human angle to capacity-building is very important and this will be fully explored because we believe the youths must be empowered in our drive towards a better Nigeria.”

The NCAC boss stressed that NAFEST 2018 will not only be a display of fanfare but an avenue to empower youths to create wealth while also preparing them to assume the role of future leaders fully equipped with the requisite skills to take Nigeria to the next level.

Commending Runsewe, the governor said the DG and his team have done an excellent job putting the festival together adding that his wife, Justice Eberechi Nyesom Wike, who hosted 500 children at the Government House was extremely impressed with the numerous components of this year’s edition.

He maintained that the successful hosting of NAFEST by Rivers State is a testament to the fact that the state is peaceful and the people are culture friendly just as he promised to support the NCAC in her mandate to continue to unite Nigerians via culture.

An excited Runsewe responded by thanking the governor and the good people of Rivers for the massive support, adding that he was impressed at the high level of peace and security in the state.

At the end of 31st edition of the national festival, Rivers State emerged first overall while Bayelsa and Ondo came second and third respectively.

Presenting awards in several categories to the winning states, Runsewe said this has been the best NAFEST in recent times, expressing hope that the next edition slated for Benin City in 2019 will live up to the standard set by Rivers State.

He said: “Over the years, NAFEST has become the veritable platform for the 36 States and the Federal Capital Territory to meet, showcase and make the most of our cultures and diversity.’’

He said in addition to celebrating Nigeria’s rich cultural tapestry, NAFEST also provided the opportunity for cultural activism. According to him, the festival provides creative images and expressions to engage leaders on the politics of nation-building, human rights, regional integration, inter-ethnic harmony, national peace and development.

1) Whether we agree or not, our diversity is what defines and binds us as a nation under the glorious sun. Although our tribes and tongues may differ, we are a nation bound by a common destiny and firmly glued together by the spirit of brotherhood, cultural harmony, and inter-ethnic solidarity instead of discord, tribalism, nepotism and sectionalism

2) What is imperative, therefore, is for us to take full advantage of the innate strength in our diversity, together with our incredible human and natural resource endowments to build a just, united and prosperous country for the present and future generation

Note: Box this by the side please