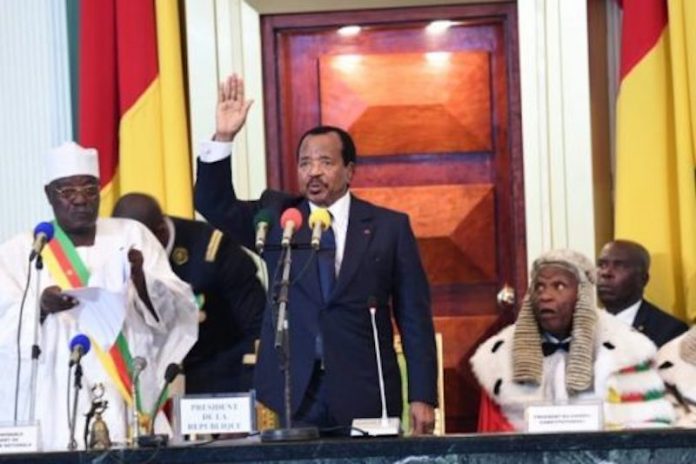 Cameroon’s President Paul Biya, in power for almost 36 years, was sworn into office for seven more years on Tuesday, after winning October’s election in a landslide.

The 85-year old, one of Africa’s longest-ruling leaders, won the October presidential poll for the seventh time, in spite of his questionable record that includes corruption and human rights abuse allegations.

During his inaugural speech, Biya acknowledged the “frustrations’’ of people in the English-speaking north-west and south-west regions, who feel marginalised in the otherwise French-speaking country.

The president promised to fast-track the decentralisation process to render local councils more autonomous, but condemned Anglophone secessionists, who have held regular protests over the past two years and sometimes stage violent attacks.

“War mongers, who are jeopardising our national unity and preaching secession should know that they will face not only the full force of the law, but also the determination of our defence and security forces,” said Biya.

However, the president remained mum about Sunday’s abduction of 79 students, their principal, the school’s driver and another staff member from a Christian secondary school in western Cameroon.

The abduction seems to be part of a plan by Anglophone secessionists to shut down all schools in the disputed regions, in a move to make the area ungovernable.

Biya was declared winner of the presidential poll with more than 71 per cent of total votes cast on Oct. 22.

His main opponent, Maurice Kamto, has since called for a resistance movement against what he said was a flawed electoral process.

A native of Cameroon’s south, Biya rose rapidly as a bureaucrat under President Ahmadou Ahidjo in the 1960s, serving as Secretary-General of the Presidency from 1968 to 1975 and then as Prime Minister of Cameroon from 1975 to 1982.

He succeeded Ahidjo as president upon the latter’s surprise resignation in 1982 and consolidated power in a 1983–1984 fake attempted coup where he eliminated all his rivals.

Biya introduced political reforms within the context of a one-party system in the 1980s. Under serious pressure, he accepted the introduction of multiparty politics in the early 1990s.

Biya is at present the longest-ruling non-royal leader in Africa and the oldest ruler in Sub-Saharan Africa after Robert Mugabe stepped down during the 2017 Zimbabwean coup d’état.

Biya has maintained Cameroon’s close relationship with France, one of Cameroon’s former colonial ruler besides the United Kingdom. NAN