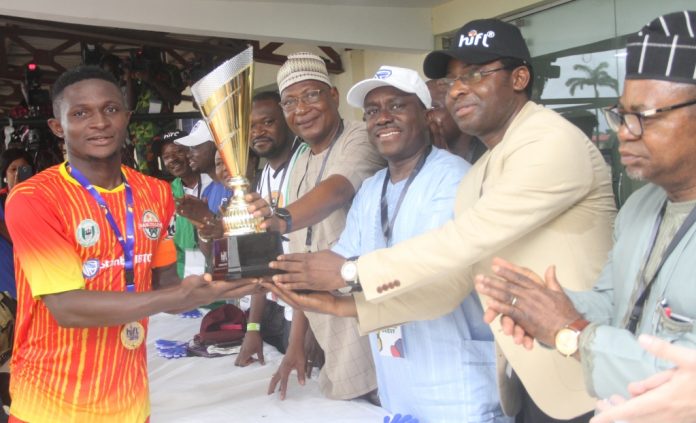 The Tillers from Makurdi started the game on the front foot, with skipper and highest goal scorer of the tournament Ebuka David in the thick of action, but the Okorie Okechukwu- led UNICAL Malabites defence stood resilient.

The boys from Calabar were the better side in the second half as skipper and Man of the Match, Charles Ufot created a lot of chances that were poorly finished. But after a goalless stalemate in regulation time, the Makurdi team won 5-4 in shoot out to be crowned champions at the Agege Stadium in Lagos.

Organisers of the HiFL league were impressed with the huge support that the league has garnered and sustained in its first inaugural edition.

A Director of PACE Sports and Entertainment Marketing, Sola Fijabi, said that he was impressed with the first edition.

“It is heart-warming to close out our first season on a high note. We are especially happy that the league did not only create an engagement platform for brands and several stakeholders, but it also unified students across Nigeria in the delightful spirit of sportsmanship.

“We are extremely prepared for the 2019 edition to accommodate more schools than what we presently have.

“In 2019 there will be 32 schools a 100 per cent increase in the number of universities that participated in this maiden edition.

“We are hopeful that like the maiden edition, subsequent editions of the league will continue to have positive impact on sports and education in Nigeria.

“We hope to place collegiate sports in Nigeria on the same pedestal obtainable in other countries that have recorded successes and built a strong network of young, home-grown sporting and football talents in particular” Fijabi concluded.

“We have delivered on the promises we made regarding standards, discipline and even fair-play. The fact that the winner of the last NUGA Games is also the winner of the 2018 HiFL competition is further proof of the credibility of both NUGA and HiFL.

“Next year, we look forward to a more brilliant and interesting execution plan that will enable more schools to participate.

“We are glad that the league has not only given a voice and a face to football talents across the country, but is also providing hope and a veritable platform of success for the numerous talents that are being discovered,” he added.

16 teams participated in the 2018 HiFL season. The Obafemi Awolowo University (OAU Giants) emerged as winners of the Third Place Playoff after defeating University of University of Ilorin (Unilorin Warriors) in a thrilling encounter, which ended 3-1

HiFL is organised in partnership with the Nigerian University Games Association (NUGA). The league is overseen by the National Universities Commission (NUC) and the Committee of Vice-Chancellors (CVC).

The winner of HIFL will represent Nigeria at the 2019 International University Sports Federation (FISU) Games in Naples, Italy.