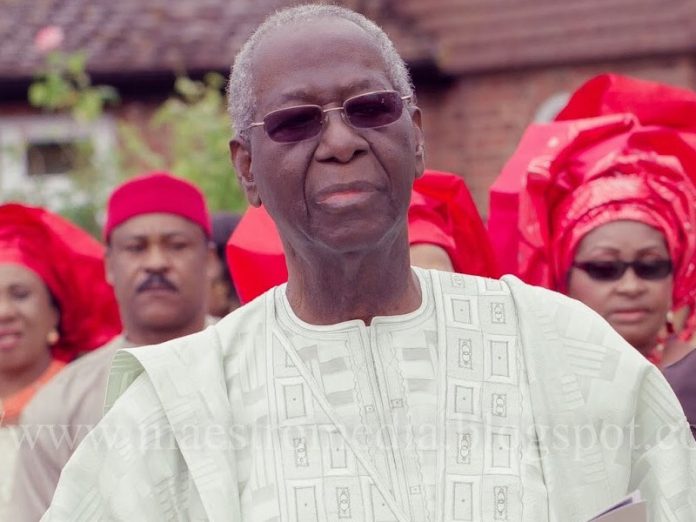 I am one of the few Nigerians who had met Chief Tony Anenih a few times before his call to glory. So while there are lots of things to write about him from historical perspectives, and from the writings and experiences of others about this giant of a man, I will be writing based on my personal experience and encounters with him.

To say that it was a privilege that I was able to meet and speak with the Esan-born chief would be stating the very obvious. Before I met him for the first time some time in 2015 during the presidential campaigns, I had had the impression that such a man was unapproachable, and probably haughty and dismissive of people not in his class, stature or level in any way. And you would not blame me. When presidents and former presidents, governors, party leaders from all divides, kingmakers, political juggernauts, captains of industry, statesmen, serving and retired military top brass, leading members of the academia etc, regal a man with the uncommon title of “Mr Fix It”, for his prowess at finding solutions to all manner of sociopolitical challenges to the satisfaction of those involved, then you should know that such a man is someone who in my native language is referred to as nnukwu mmanwu (The Big Masquerade) who must be feared or there are consequences and whose appearance climaxes big occasions. But as for Anenih, he might have been the big masquerade but in place of fear, he exudes love and amiability.

On meeting the former minister of works and housing, I came to discover that he was a firm but fair man in his dealings with people. He took decisions that would ordinarily not go down well with some people but that would bring solutions to almost every situation he was faced with leaving some with gladness and even others with admiration!

During the 2015 general elections campaigns, Chief Anthony Akhakon “Tony” Anenih served as Special Adviser to the Goodluck Jonathan/PDP Campaign Organisation. And as one would expect, there were times when different departments of the organisation had misunderstandings and disagreements that threatened the smooth running of Jonathan’s campaign, as the then media adviser to Chief Femi Fani-Kayode, former minister of aviation who was the Director of Media and Publicity of the Jonathan/PDP campaigns, I would join FFK to Chief Anenih’s house where the issues were resolved.

First, his humility hits you from the very beginning. Here was a man who never kept his visitors waiting as it is common with men of such status. Once you secured an appointment to see him, you were most likely going to find Chief Anenih already seated waiting for you.

Second, he had no airs. Except for issues that were very private, Chief Anenih allowed as many of us on an entourage to be at meetings with him. Even when you offered to excuse yourself at such meetings, he would counter and insist you sat as there was nothing to hide. This usually made me uncomfortable as I was trained to usually excuse my elders/leaders whenever they are having discussions that are of little or no concern to me. But as this continued, I later discovered that this was Chief Tony Anenih’s own unspoken way of blooding the younger ones into maturity as it concerns politics, governance and leadership. He expected that those usually present at such crucial meetings learned one or two things about the art of resolving complex and high wire political matters without fear or favour, with firmness and fairness and with the larger picture always in mind. And truly, whatever matters were taken to him for resolution usually got resolved with the panache of a revered leader and the stamp of authority of a fixer since everyone usually got satisfied with the outcome of such meetings. He had his own peculiar way of taking honey into the lion’s den and return unscathed.

He kept a busy schedule even till recently and did not seem to discriminate between the old and the young, the weak and the strong, the powerful and the downtrodden about who was coming to see him as I usually met people of all ages and status at his place who wanted to see him for one thing or the other. He was surely a man at home with being a solution provider to the people.

In all these, Chief Tony Anenih had lived a political life devoid of the garrulousness of politicians of his status. He had carried himself with dignified gait and offered advice and solutions without making any noise about them. Even though he had children who are social media savvy, he had managed not to use that as an avenue to draw attention to himself. Until recently when age began to tell on him, he remained a very effective but quiet achiever and he expected his children and those who had met him to be so effective.

I remember vividly well certain election that took place on twitter in which one of his sons participated and won. When that his son told him about it, he simply replied, “Wouldn’t you have won the election?” In other words, he expected not only his children but also those who have passed under his tutelage to be winners, not just winners but magnanimous winners, and in case they lose, to be patient and wait for another time.

This brings me to his children. I have met only one of them, Ose. If anyone would like to confirm all I have said about Anenih, just meet any of his children. Just like his father, Ose has no airs and no noise but only poise around him. I actually met him through one of my closest and trusted comrades and partner, Mr Ariyo-Dare Atoye. We had an urgent job to do and delivery date was closing in on us, and we were still searching for an office space. We were in a dire situation. It was either we delivered or we lost our goodwill. It was then Ariyo suggested we spoke to Ose if he could give us some space in his office. Ariyo did, and without much explanation from us, he gave us a space and also access to it and the facilities there even if he was not around. He left instructions with his staff to ensure we were comfortable. Apart from that, Ose would come around our desk once a while to see how far we were going with the project and offer his advice where necessary. Sometimes, aside work, we would gist and talk about sociopolitical developments in the country in very relaxed atmosphere that no one would even ever think that we were rent-free tenants even if it was for just a short moment. Such a pleasant fellow! This is in a country where children of men and women of such class oppress their fellow citizens with blaring sirens, scary revving of power bikes, and threats of menacing and mean looking aides and security personnel!

The encounter with Ose left a lasting impression on me. To me, it reflects on the kind of family he comes from and the kind of training and legacy Chief Anenih has bequeathed to his children. Beyond relying on their father’s influence for anything, they have been adequately equipped with life’s greatest virtues of humility, temperance, fortitude, prudence and charity to the extent that they can navigate through life’s challenges without much reliance on their father, his influence or affluence!

Chief Tony Anenih’s influence on the political trajectory of Nigeria would also surely be missed by all no matter the political divide. It was such influence that former president Goodluck Jonathan referred to when he appealed to Anenih at a point to reconsider his decision to quit partisan politics. Hear Jonathan: “We agree that you will not attend meetings at 2am, 3am, but, in the areas of security and politics, we will consult you”. That is how important the man Chief Anenih was! He had the audacity to fix things where others dreaded to go near. His well known humble mien had nothing to do with his capacity and capabilities to deal decisively with situations no matter how hydra-headed or monstrous they were. He always rose up to the occasion and delivered. And that was why even presidents trusted him with sensitive tasks whether in government or when he was out of government. He did not earn the title “Mr Fix It” for nothing. He proved to be a courageous fixer!

Chief Anthony Anenih who died on Sunday, October 28, at 85, would also be remembered for his generousity and philanthropy not only to the Church but also to the needy irrespective of religious background and political affiliation all of whom he had supported in no small way.

As the family and Nigeria mourn the fall of this political giant, we pray that the soul of Chief Tony Anenih and the soul of all the faithful departed through the mercy of God rest in peace. Amen!