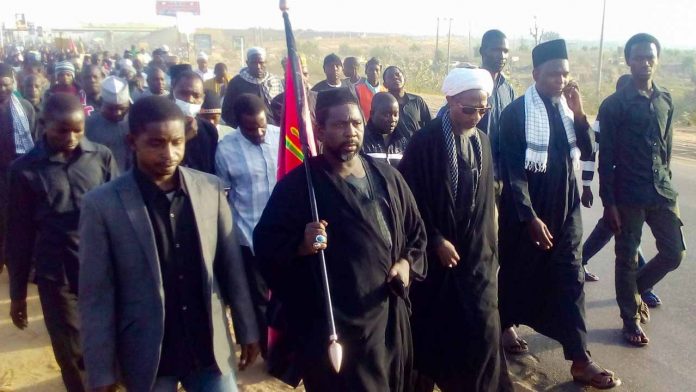 The Nigerian Police Force thursday arraigned about 130 members of the Islamic Movement of Nigeria (IMN), before a Magistrate Court of the Federal Capital Territory (FCT) over an alleged five-count charge bordering on disturbance of public peace, rioting and others.

In the First Information Report (FIR), the defendants are being charged with Joint Act, joining or continuing in unlawful assembly knowing it has been ordered to disperse; disturbance of public peace, rioting and causing harm an offence the police said is contrary to section 79, 104, 113, 106 and 242 of the Penal Code.

According to the charge, the defendants were said to have been involved in riotous act, disturbing public peace and blocking vehicular movement in different parts of the FCT and its environs on October 30, 2018.

The police further alleged that the defendants who were gathered in large groups were ordered by the Assistant Commissioner of Police in Charge of Operation FCT Police Command, ACP Valentine Olumesi, to disperse peacefully but that they refused and started throwing stones on the police officers and other members of the public thereby causing them bodily harm.

However, the defendants pleaded not guilty to the charges read to them.

Counsel to 20 of the defendants arraigned before Justice Lateef Abolaji of Court 17 of the FCT Magistrate Court, Musa Yusuf, subsequently moved their bail application.

Though counsel to the Police, Edwin Ochei, opposed the application, the trail judge, however admitted the defendants to bail, stating that the offences allegedly committed were bailable.

He consequently admitted the defendants to bail in the sum of N50,000 each with a surety in like sum.

Other conditions he attached to their bail include deposing to an affidavit to keep peace and be of good behavior.

Their sureties must also be residents of Abuja with verifiable offices and residential addresses.

In addition, they are to deposit either their national identity cards, drivers’ licence or international passport with the court.

Similarly, a batch of 35 others arraigned before Justice Njideka Duru of Court 11 were admitted to bail in the same sum of N50, 000 each with two sureties in like sum.