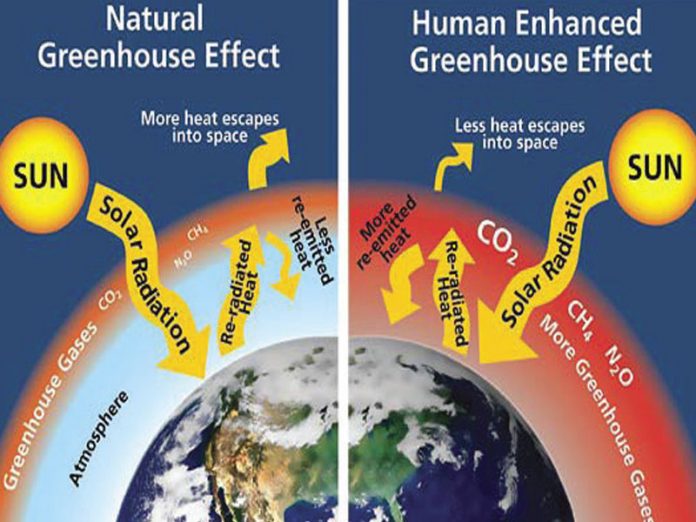 Reducing global warming emission has remained a continuous conversation over the years and mankind has had to deal with the challenges.

At the recently Inter-Governmental Panel on Climate Change (IPCC) meeting in Incheon, Republic of Korea, the issue of global warming was once more brought to the fore.

This time, the focal point of the discourse cantered on limiting global warming to 1.5ºC would require rapid, far reaching and unprecedented changes in all aspects of society.

The report noted that with clear benefits to people and natural ecosystems, limiting global warming to 1.5ºC, compared to 2ºC, could ensure a more sustainable and equitable society.

It was also stated that the report would be a key scientific input into the Katowice Climate Change Conference coming up in Poland in December, when governments review the Paris Agreement to tackle climate change.

The Co-Chair of IPCC Working Group I, Panmao Zhai, said one of the key messages that came out very strongly from the report was that they are already seeing the consequences of 1°C of global warming “through more extreme weather, rising sea levels and diminishing Arctic sea ice, among other changes.”

It added that coral reefs would decline by 70-90 percent with global warming of 1.5°C, whereas virtually all (99 percent) would be lost with 2ºC.

The Co-Chair of IPCC Working Group II, Hans-Otto Pörtner, said every extra bit of warming matters, especially since warming of 1.5ºC or higher increases the risk associated with long-lasting or irreversible changes, such as the loss of some ecosystems.

He said limiting global warming would also give people and ecosystems more room to adapt and remain below relevant risk thresholds.
In another reaction, the co-chair of Working Group I, Valerie Masson-Delmotte, noted that some of the kinds of actions that would be needed to limit global warming to 1.5ºC are already underway around the world, but they would need to accelerate.

The report observed that limiting global warming to 1.5°C would require “rapid and far-reaching” transitions in land, energy, industry, buildings, transport, and cities.

“This means that any remaining emissions would need to be balanced by removing CO2 from the air.

“Limiting warming to 1.5ºC is possible within the laws of chemistry and physics but doing so would require unprecedented changes,” said Co-Chair of IPCC Working Group III, Jim Skea.

The effectiveness of such techniques are unproven at large scale and some may carry significant risks for sustainable development, the report noted.

She added that this would make it easier to achieve the United Nations Sustainable Development Goals.

Also in his reaction, the co-chair of IPCC Working Group II, Debra Roberts, said the decisions reached were critical in ensuring a safe and sustainable world for everyone, both now and in the future.

“This report gives policymakers and practitioners the information they need to make decisions that tackle climate change while considering local context and people’s needs. The next few years are probably the most important in our history,” Roberts said.

Timely Warning
In his reaction to the IPCC report, the Founder of Lufasi Nature Park, Mr. Desmond Majekodunmi, said any report coming from the IPCC should be taken very seriously indeed.

He further stated that the United Nations has been alerting the world for decades about the inherent dangers of polluting the atmosphere with too much greenhouse gas.

He added that some of the inherent dangers include millions of tons of Carbon dioxide that have driven the Earth’s temperature 1 degree centigrade above average in the past century.

“We are now experiencing the effects of this with the emergence of unprecedented rapid climate change that is giving rise to increasingly catastrophic weather occurrences,” he noted.

Majekodunmi explained that the IPCC sent a stark warning with their latest report, that pushing the earth’s temperature above the 1.5C agreed by all nations including Nigeria at the Paris conference in 2015 would greatly increase the severity of these weather occurrences.

The founder of Lufasi Nature Park, remarked that if pollution is allowed to push the temperature to 2 centigrade not only would these activities become dramatically more catastrophic, but mankind would have breached tipping points that could become irreversible.

According to him, “The earth’s temperature could take an upward spiral with catastrophic consequences and damage to eco systems that could eventually lead to the extinction of a large proportion of species, including the homo sapiens.

“The report spells out in graphic detail, supported by charts and graphs, the various effects of the global warming at the current 1C, the 1.5C target and the likely 2C scenario that includes near total destruction of coral, dramatic water and food shortages, vast spread of disease and millions of internally displaced people.

“However the most deeply alarming aspect of the report is that humanity, despite our avowed de carbonisation targets, is not currently on track to meet the 1.5C target agreed to at the 2015 Paris COP and that we have only 10 to 12 years to massively reduce the greenhouse gas pollution before the 1.5c target is breached.

“In order to avoid this catastrophic scenario the IPCC is saying that humanity will need to make fundamental lifestyle changes, including a very rapid transition away from fossil fuel to clean energy sources, reduction in our consumption of natural resources and developing our urban areas far more sustainably.

“We would also need to make dramatic changes in our agricultural practices and even cut back on our beef and wheat consumption due to the disproportionate land and water resources required by these commodities. A massive global programme of afforestation and very strict forest protection will also need to be implemented immediately.

“The challenge facing us is that even though the transition to a green economy is already proving to be quite profitable, in the process some big business interests will be negatively impacted.

“Therein lies the crux of the matter. We arrived at this potentially catastrophic scenario by evolving a socio economic system that puts profit ahead of the common good.

“If we cannot adopt fundamental scriptural injunction and express genuine love for the creator and each other by caring for his glorious creation, which is our own life support system, then putting this climate change monster in check might prove impossible, with the attendant disastrous consequences for ourselves and our children.

“Though the time is running short there is still a small window of opportunity to avert apocalypse and my sincere hope lies in the fact that the overwhelming majority of us do love our children and would spare no expense or sacrifice to protect their lives. The first step in this battle is to fulfill our scriptural mandate and decide to become creation carers.

“Here in Nigeria, which is actually one of the more vulnerable countries to climate change, whilst commending President Muhammadu Buhari for making frequent references to climate change in local and international fora, we need to insist that environment issues are put on the front burner and that the great work initiated by the previous Minister of Environment Amina Mohammed which is still being carried out by her successor is fully supported.

“We in Africa did not create the problem but we are very vulnerable to the effects. Nigeria as the waking giant of the continent should lead the way in addressing the problem.”