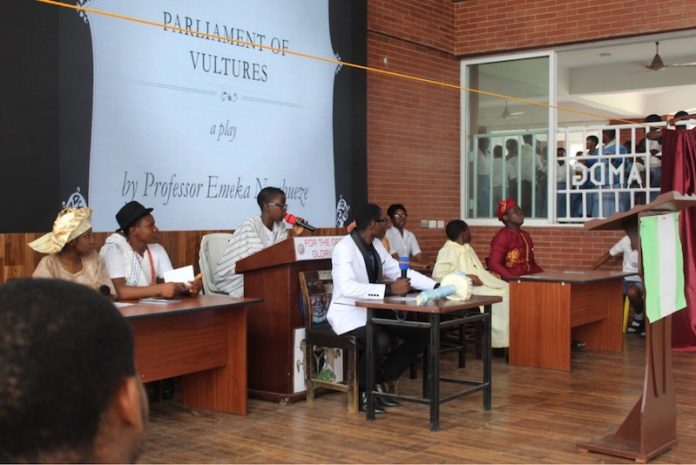 The commemoration of the 58th Independence Day anniversary of Nigerian might have come and gone, but some of the memories it left behind lingers. One of such memories was the dramatic presentation by students of St Francis Secondary School, Idimu, Lagos, one of the three Jesuit colleges in Nigeria, who through drama exhibited a satirical presentation of the ‘dishonourable’ actions of the nation’s political representatives.

During the event held at the school premises, the students through a play they performed at the Arts Festival in celebration of the independence anniversary, expressed their worries over the plight of the nation in the hands of Nigeria’s representatives.
Although the festival was heralded by speeches, comments and wishes, it’s peak was the play performed by the students titled ‘The Parliament of Vultures,’ written by renowned playwright and scholar, Prof. Emeka Nwabueze, of the University of Nigeria Nsukka.

The Play
The play is a satire of the shameful practices of Nigeria’s lawmakers, and leaders at large, which mainly represents the anomaly practiced by the nation’s representatives. As presented theatrically by the SS3 students of the school, ‘The Parliament of Vulture’ showed members of the legislature partying and wining and dining with the taxpayers’ money. To them, lawmaking begins and ends at raising and seconding motions for the appropriation of monies for their upkeep.

In the play, the floor of the parliament is taken over by colleagues whose selfish interest is uppermost. At the move of a motion, cheques are signed and doled out by the speaker of the parliament, who is always doing the bidding of his influential colleagues just to make them happy and keep his position. During proceedings, the voice of the ayes is louder than the nays, whether the matter at stake is for or against the masses.

Although, the characters represent diverse ethnic nationalities as shown by their costumes, such diversity only exist in the mind and not when they want to share the cake – such differences only end up inside the cooler the moment it is time to discuss what gets to who. Because the sharing must be done fast before the people will be aware.

Dissenting opinion is not tolerated. It is either you belong and play ball or you are kicked out by way of blackmail and subsequent suspension. Even the chaplain of the parliament is compromised because he doesn’t want his position to be taken over by someone else. But while all these go on in the legislature, the masses suffer. No good policies to alleviate their suffering; no good roads, hospitals, schools and no food to eat. But they must queue up at every election to elect these same rogues masking as representatives of the people.

While the adult audience watched this artistic parody with a blend of sobriety and amusement, the young virgin minds watched with an uncontrollable excitement, laughing at every move of each character.

Essence
But what is the essence of presenting this dramatic piece on the day of supposed national celebration? The Administrator of the school, Fr. Maduabuchi Muoneme, reasoned thus: “I think if that’s what’s going, it will be quite preposterous to now begin to be quiet and feel that things are alright when they are not. If things are alright the security of this country should be better, money voted in for healthcare should be used, the educational condition of our country should improve and the roads should be better, we shouldn’t be having potholes on our roads for centuries.

“So the students don’t like what they are seeing, that’s why they want to act it. They want to act it to send a prophetic message to the leadership of this country because they themselves are concerned. They want things to change and since we are putting our hope in them, then I think it’s important for them, whether it’s through caricature, parody, or drama, let them showcase the negatives, the shadows of the Nigerian government so that when they too take over the leadership of this country they will have the foundation, the ethical grounds to transform things for the better.

“That’s why we have bad roads because money voted in for bad roads are plunged into private accounts. That’s why we don’t have good hospitals; good educational facilities; that’s why even pensioners are not paid their pensions; and that’s why there’s abject poverty on this land. So we are 58 years old, yet we have not reached our potentials.”

The administrator noted that the school tried to use the festival to celebrate arts, drama, music, dance and culture, adding that the school would continue holding it every year on October 1 to honour the country’s independence and her heroes.

The administrator however said despite the ugly state of the country, there is still hope that things will get better. “Yes, things are bad but there’s hope that things can be better provided we put our hearts and our minds and hands together to transform this country to a better nation,” he added.

Muoneme further said: “So this is part of education and we want them to express themselves in freedom artistically. We all are made in God’s image and likeness and our creator is a creative being. And since we’re made in His image and likeness we also ought to use our gifts and talents of creativity for good. So that’s what we’re trying to do. That’s why we have beautiful works of art in the arts studio, and also in the school’s Tunnel of Good Hope, and in the Refectory, and of course, around the school compound you will see a lot of celebration of arts just to inspire the mind.”

For the Love of Music
Muoneme revealed that music was also one of the tenets of the Jesuit education hence, the celebration of music at the festival, adding that, “we want our students to be able to express themselves musically. And that’s why you have the St Francis Symphony Orchestra perform.”

Meanwhile, the Music Director of the school, Mr. Adedeji Kikiowo, who guided the students to thrill the guests with varied soulful songs, expressed his excitement at the success of the presentations. According to him, even on short notice, the students were able to prepare themselves for the show. This, he attributed to the students’ interest in creative things.

“As you can see, they did what they did with so much excitement. Even when some of them came in newly, they requested for the song, I gave them the keys; they went home and practiced them. And you saw them on stage presenting all they have learnt.
I think it was based on the fact that children are so interested, they are creative, they just want to express their creative ideas”, Kikiowo said. 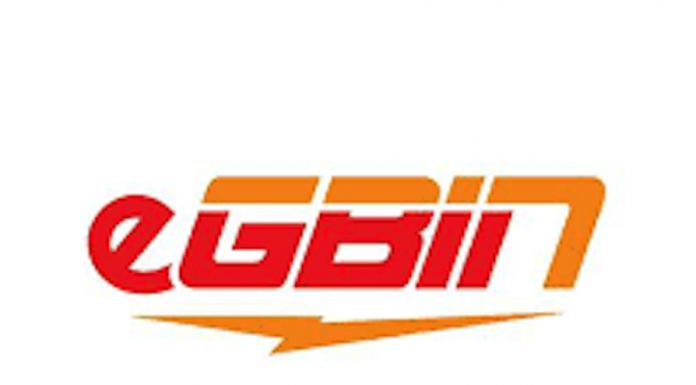