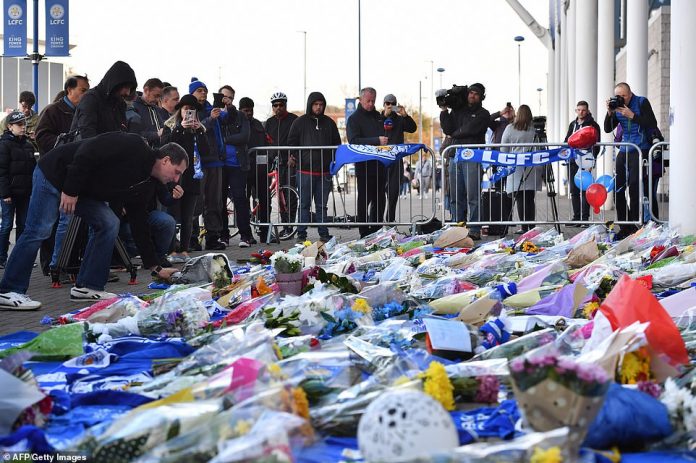 Tearful Leicester City fans gathered to lay flowers at the King Power Stadium yesterday after reports the club’s owner, Vichai Srivaddhanaprabha, was on board a helicopter that crashed and burst into flames Saturday night. There was no survivor from the crash.

The helicopter – carrying the popular club owner, Srivaddhanaprabha, two pilots and two others – crashed in the corner of the club car park moments after taking off from the centre circle following Leicester’s draw with West Ham Saturday night.

Early reports said Mr Srivaddhanaprabha’s daughter was on board with him at the time, although sources at Leicester City have since denied this. The BBC reported that a family source said the owner was on board.

Fans who gathered at the ground Sunday morning branded it Leicester’s ‘darkest day’, paying tribute to the owner who helped them to a miracle Premier League triumph in 2016.

Police are yet to comment on the fate of Mr Srivaddhanaprahba, 60, who has four children. With fans waiting desperately for news, detectives said yesterday afternoon they were ‘working with a number of other agencies’ to release a statement.

Mr Srivaddhanaprabha’s helicopter was heading for Luton Airport where he was due to catch a flight to Thailand, Leicester sources said yesterday.

Witnesses said the ‘engine stopped’ in the air before the helicopter plummeted to the ground at around 8.45pm on Saturday night.

As Premier League fixtures resumed yesterday there was a minute’s applause held at Crystal Palace in solidarity with Leicester, and a minute’s silence at Burnley, even with fans still in the dark over the outcome of the crash.

Outside the King Power Stadium yesterday a sea of flowers and blue football scarves has grown as supporters wait anxiously for news on the helicopter disaster.

As it stands, they are due to host Southampton in a Carabao Cup round of 16 tie on Tuesday night.

However, in light of the potentially tragic situation, Leicester is set to seek to postpone the fixture.

Leicester will need permission from the English Football League and the Saints before it can be pushed back. Leicester will argue that the players and club management, who were still in the stadium when the crash occurred, are in no fit state to compete following the helicopter crash.

The team is also due to travel to Cardiff on Friday for its next Premier League match although there is no suggestion as of yet that it is seeking to postpone Saturday’s clash as well.

Leicester Women have announced that their game with Manchester United Women will be postponed.

They tweeted yesterday: ‘In light and in respect of the recent events at King Power Stadium our @FAWC_ fixture against @ManUtdWomen has been postponed. A newly arranged date will be communicated once confirmed.’