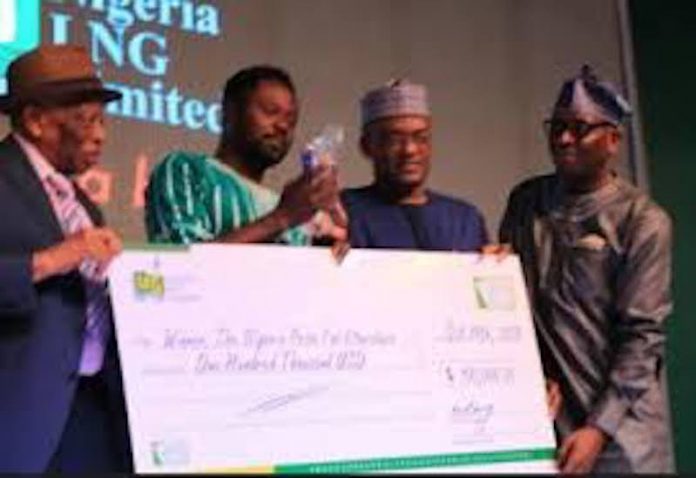 That was good thinking, Nigeria LNG! The annual awards night and dinner just needed to be brought back! Years after substituting the colourful event with a rather subdued and frugal world press conference, it is gratifying that the organisers had a timely rethink.

For the Lagos literati especially, that Friday, October 19 evening at the Victoria Island-based Eko Hotel and Suites’ Convention Hall was akin to a return to the literary prize’s good old days. Hence, that evening was appropriately shrouded in a festive ambience. And this was just when many had feared that its glamour was beginning to bubble away.

After the announcement of the science and literary criticism prize winners, all eyes were turned to the three shortlisted literary prize contenders: Denja Abdullahi (with the entry, Death and the King’s Grey Hair), Soji Cole (with the entry, Embers) and Akanji Nasiru (with the entry, The Rally). It is no longer news that Soji Cole was announced the winner of this year’s prize, which focused on drama, after an unnecessarily lengthy, suspense-filled speech by the advisory board chairman of The Nigeria Literature Prize, Professor Ayo Banjo. Prior to that announcement, drama skits from the three shortlisted entries were staged even when they left the audience none the wiser as to who would eventually clinch the prize.

Of course, it helps to recall that the prize, which was first awarded in 2004, alternately beams its spotlight annually on the four literary genres: prose fiction, poetry, drama and children’s literature.
The Nigeria Literature Prize has not always been worth $100,000. It had first started with a winner-takes-all $20000 prize in 2004, which sent a pack of literary wannabes snapping at its heels. But that year, no one was deemed worthy of the prize. The following year, which focused on poetry, saw the prize split between two contenders: Professor Ezenwa Ohaeto and Dr Gabriel Okara.

When the spotlight shifted to drama in 2006, the winner Dr Ahmed Yerima was awarded $30000 for his entry Hard Ground. The following year, thus prize money was split between the two winners Professor Akachi Adimora-Ezeigbo and Mabel Segun for their respective children’s literature entries My Cousin Sammy and Readers’ Theatre: Twelve Plays for Young People.

By 2008, when the prize money had been upped to $50,000, the spotlight had returned to prose fiction. Hence, Kaine Agary became the prize’s first ever winner of that category with her entry, Yellow Yellow. After another no-winner year, 2009, the prize produced its first ever posthumous and diaspora-based winner Dr Esiaba Irobi with the entry Cemetery Road.
It was in 2011 that the prize’s value first hit the $100,000-mark and has since remained the same till date. That year, which focused on children’s literature, the prize was awarded to Adeleke Adeyemi, who wrote under the pseudonym Mai Nasara, for his entry The Missing Clock.

The year 2015, which focused on children’s literature, was yet another no-winner year for the prize. Not only were the entries that year not deemed good enough, they were also criticised for not being suitable for children.

Moving on to the fourth cycle in 2016 with the spotlight once more on prose fiction, the prize was won by Abubakar Adam Ibrahim for his entry Season of Crimson Blossoms. Last year, which was 2017, was won by Ikeogu Oke, whose entry, The Heresiad beat the shortlisted works of two more-renowned other poets. The literary criticism prize, which was introduced only in 2014, has only been won twice since its inception. The winner, Professor Isidore Diala, clinched both the inaugural edition and this year’s edition while the intervening years produced no winners.
The literary prize’s no-winner announcements have always stirred the hornet’s ne