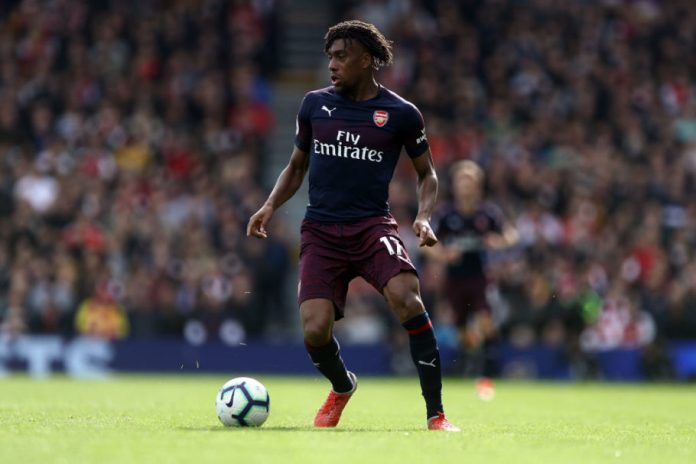 Weeks after the arrival of Unai Emery to the Emirate Stadium, Nigerian international, Alex Iwobi was one of the first Arsenal players to hail the Spaniard, saying he had brought a new lease of life to the Gunners and that his game had improved under him. Indeed, his recent performance proved him right so much so that Arsenal fans hailed him as the club’s version of Barcelona’s Messi

Super Eagles star, Alex Iwobi, has been a different player this season under Unai Emery and his stellar performance in Monday night’s Premier League game against Leicester City in which he earned himself the man-of-the-match award for his crucial part in his side’s counter-attack plan to catch the Foxes on the break.

Following the match, YouTube channel AFTV spoke to those leaving the ground about their thoughts on the 22-year-old.

And they may have got a bit carried away.

“Don’t call him Alex Iwobi anymore, he is the Nigerian Lionel Messi,” one claimed.

Before adding: “Emery has brought such a freshness to the side.

“He came in and lost the first two games, but that feels so long ago now.”

“I think you mean Messi is the Argentinian Iwobi,” one viewer claimed.

Another added: “Iwobi doing things so right! Last season he’d make such brain-dead decisions but this season I’m shouting for him to receive it!”

And a third claimed: “Iwobi is definitely a candidate for Young Player of The Season!”

Meanwhile, Arsenal coach has charged Iwobi to be staying nearer to the box so as to continue scoring and laying assists.

“I’m very happy with him and his mentality. He has the quality to play right or left, to do more one-on-ones against the opposition. I want him to stay nearer the box to score and be more aggressive, finding assists for team-mates. This is the way for him and other players,” Emery said

So far this season, Iwobi’s performances have seen him become a pivotal part of new coach Emery’s plan.

Iwobi however said Emery had removed the fear of failure at Arsenal, which has allowed the club to piece together a run of 10 consecutive victories in all competitions.

The atmosphere towards the end of the Arsène Wenger years was tainted by negativity, which was not all down to the former manager – rather the broader situation around him and the yearning for change among a large section of the fanbase.

One of the consequences was an extreme lack of patience. If the team fell behind in matches, the players would not want to make mistakes and, invariably, they chose not to take risks. The result could be inertia; an inability to make comebacks.

Emery has benefitted from a greater degree of slack but, at the same time, he has driven a positive feeling through his bold approach. Arsenal started poorly once again at home to Leicester on Monday night. They trailed 1-0 after 31 minutes and the deficit could and should have been greater.

There are defensive holes in the team and it was not difficult to imagine how the Emirates crowd would have reacted last season. But Arsenal remained unafraid to express themselves in an attacking sense and the result was an eventual 3-1 win.

“The manager has imposed a new style and we are enjoying our time,” Iwobi said. “We are enjoying each other and the chemistry is good – it’s not just the people who are starting but those on the bench, as well. It’s a team thing and we are all enjoying it.

“The manager has just given me the confidence to express myself and to believe in my ability, which I have been trying to show. In training, too, he is always letting me try new things – be positive, be direct and prove it in the games. It is working for me so I just have to keep it going.

“Do I feel like a better player than a year ago? I’d just say I am more confident. I feel that even if I make a mistake, I am able to go again. I think that is the difference between me last year and this year.”

Iwobi got the nod on the left ahead of Aubameyang and Welbeck against Leicester, and he was a factor in the comeback, getting into dangerous areas towards the end of the first half.

“I get the privilege to play with Mesut every day,” Iwobi said. “He is a world-class player. He gives me advice in a different way. He jokes around but he always tells me I can do more. He also gives me the confidence to express myself.”

‘I have been training with him since I was 17 and I have seen what he can do. The quality he has is not just in training but as you can see in the match last night, he is a world-class player and he proved that again. Mesut will come across as laid back but he is helping everyone in a different way and he helps me a lot,’ Iwobi said.

‘For me, he has just given me confidence to express myself, to believe in my ability which I have been trying to show and basically also in training he is always letting me try new things, be positive, be direct and prove it in the game,’ Iwobi said.

‘It is working for me so I just have to keep it going. I am more confident, I feel that even if I make a mistake I am able to go again. I think that is the difference between me last year and this year.’

Arsenal are now level on points with Chelsea and remain just two points behind league leaders Manchester City and Liverpool.

Since that defeat at Stamford Bridge the north London side are yet to lose a game, and made it 10 in a row with Monday’s victory over Leicester. And the 22-year-old has conceded that things are looking up at the Emirates this term.

“Yeah, it’s going well, I’m very confident now. The manager is always being very positive to me, he’s always telling me to keep on going even if I make a mistake,” he told the club’s official website.

“That’s what I’m showing, and also proving to myself that I can put in 100 per cent throughout the game, and that’s why I’m shattered right now! Yeah, that’s basically what he’s been telling me.” he aid.

Indeed, Super Eagles Manager, Gernot Rohr says Iwobi is free to express himself in the Super Eagles, as long he plays for the collective good of the team.

“Perhaps some times he did a little too much individually, he wanted to make a show. We prefer collective football.

“But when he can eliminate his opponent it’s very good. He’s with us all the time in confidence. He’s free when he has the ball,” Rohr said.