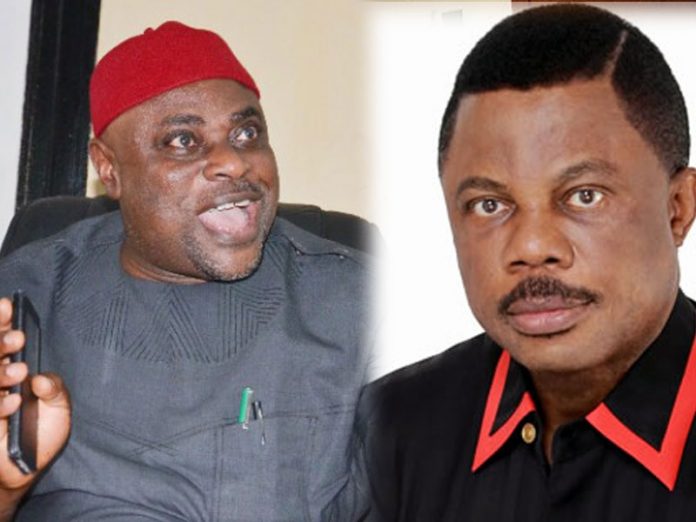 Going by what transpired at its recent primaries in Imo State, the All Progressives Grand Alliance (APGA) is beginning to look like its adopted name is, ‘Anambra Progressive Grand Alliance.’ Some fast-talking, swift-acting ‘guy men’ from Anambra State came into Owerri, the Imo State capital and ripped-off the purses of our own. Billions of Naira left Owerri for Awka, the capital of Anambra State. Each male from Awka got a fair share. Nineteen aspirants bought nomination forms for the office of governor at N22 million each. Do the calculation. You will get over N 400 million.

More than 120 aspirants contested for the 27 slots in the state House of Assembly. They coughed out N1 million each. Just add this up. You have N120 million. Sixty-six

forms were sold for the available 10 seats for House of Representatives. Each form was sold at N5 million. Press your add button. It is N33 million.

Each aspirant bought nomination forms for delegates at the cost of N10,000 each. I was reliably informed that a total of N58,590 forms were sold at N10,000 each. This translates to N58.5 million.

There were lots of other sundry payments. Fees for waivers? Alleged bribes for Governor Willie Obiano and his hitmen. Shaking hands of Obiano’s errand boys? Envelopes for the screening panel members? Fat envelopes for members of the National Working Committee? Donations made during the launching of the APGA brochure in Awka? Hotel bills of PAs and SAs?

Virtually every politician in Anambra had a cut from the windfall. Our people were literally resident in Awka, pressing buttons. The National Chairman of APGA, one barely cerebral dude turned himself into the ‘Long Juju’ of Arochukwu. His consultation fee was as low as N10,000,000! Expression of interest before him attracted a huge cough. A once struggling man, Chief Victor Oye allegedly got an oil well in Orji-Uratta-Mbaise using APGA as a conveyor belt, the resources of Imo State were criminally transferred into the established strong rooms of smart ruthless politicians from Anambra.

When billions of Naira had left, and when each aspirant was forced to pay his dues, and when the hawks from the neighbouring state succeeded in raking as much as they could, Oye and his group put the mother of all hurdle before the governorship aspirants. A stipulated sum, too high for any man of sound means, was demanded. “Drop this last cash, and pick up the ticket”

Oye and his men received the staggering sum and acted promptly. Obiano deployed his cronies to Owerri, where the drama was acted. Nwankwo Kanu Sports Centre became the venue. An aspirant with the biggest purse was given the ticket. Others were abandoned, littered and rubbished

Oye and his merchants have rubbished the best of our state. Ikedi Ohakim. Frank Nneji. Okey Eze. Uche onyeagocha. Ike C. Ibe. They were all played off. Greed led to this. Nobody cared about the future of Imo State. Good governance didn’t matter. APGA, Awka was only interested in the Imo money.

I was told that the ticket was sold to the highest bidder. Imo State is currently pensive? These guys ‘aruola anyi’ local job. What transpired in the last three months in Owerri has all the telling signs of fraud.

We need to take these beneficiaries up. They collected millions and promised to hold primary elections. They did none. From the House of Assembly to the governorship, the excuses sing. No primaries took place anywhere in the state. Names of aspirants with the highest pecuniary reach were rolled out. To get a ticket, you must know someone who knows Obiano.

Will APGA rise again? The aspirants are drawing their daggers against APGA. The State Working Committee has released its position, claiming that it wasn’t consulted before the ticket was handed over. If neither the aspirants nor the leadership of the party in the state don’t know what happened in the state, who knows?

Oye and his men must refund every kobo they allegedly swallowed. We must drag them to Economic and Financial Crimes Commission (EFCC).