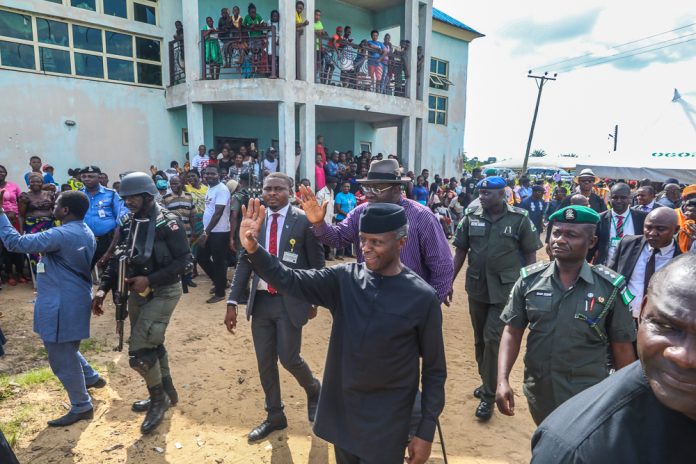 By Ernest Chinwo in Port Harcourt and Emmanuel Addeh in Yenagoa

The vice President also visited flood victims in Rivers State, where he announced that the federal government was working towards proper resettlement of the victims

Osinbajo, who also jointly flew  over some flooded parts of Bayelsa State with Governor Seriake Dickson,  to assess the flood situation in the state, sympathised with the victims of the flood, assuring that the federal government would provide succour for them.

On the entourage of the vice president were the Minister of the Environment, Alhaji Ibrahim Jibrin,  Director General of National Emergency Management Agency (NEMA) Mustapha Maihaja, Senator Magnus Abe and former Governor of the State, Chief Timipre Sylva.

Osinbajo said he was directed by President Muhammadu Buhari, to come and have an on-the-spot assessment and expressed shock at the level of destruction occasioned by the phenomenon.

“We will support as much as possible the National Emergency Management Agency (NEMA) which is working hard to ensure that we give as much succour and provision of tents, mattresses, food, mosquito nets and all that are required.

“In the next few weeks, many will be returning home where many have lost their homes, farmlands and livelihoods. We will support Bayelsa state government in the resettlement efforts which is more important.

“In future, we want to be able to prevent this situation. It’s repeating itself in 2018, so steps need to be taken to dredge our rivers, stop dumping of solid waste into our water bodies, clear waterways and build canals, so that there will be no flooding,” he said.

He observed that five women had been delivered of babies in the IDP camps, noting that the Federal Government would render the necessary assistance to them. “I have seen about five women who have given birth. A lot of them would require a lot of care. We are committed to supporting them in whatever way we can. We are here with the NEMA DG to understand firsthand what is required.” He added.

At the St. John’s Catholic Church, Igbogene, where the church took in some 600 displaced victims, Osinbajo reiterated his earlier message of comfort, noting that in the next few days the government will bring more relief to the victims who were initially being taken care of by Very Rev. Joseph Opelema, the Vicar-General of Bomadi Diocese.

In his comments,  Dickson wondered why the federal government did not add the state to the first list of flood  disaster  zones in the country, but admitted that he had been told that it was not deliberate.

He emphasised the need for the Federal Government and donor organisations to collaborate with the state in providing long term solutions to the perennial problem.

He said: “We are dealing with a flood disaster of monumental proportion. Let it be known at the centre that this is the state that is inevitably always most affected because of our peculiar terrain and topography.

“The entire state is below sea level, so once there is any slight increase in water level from the rivers that are all around us, the whole of this state is submerged.”

The Governor said that the state had 13 IDP camps while efforts were being made to establish three others to alleviate the plight of those displaced by the flood.

He lamented the destruction of farmlands and other sources of livelihood and  called on the Federal Government to equip NEMA to be able to render the necessary assistance to the victims.

In Rivers State, Osinbajo said the Federal Government was working towards the effective resettlement of victims of the flood that have ravaged parts of the state.

Addressing victims of the flood at the Internally Displaced Persons (IDP) Camp, Okogbe in Ahoada West Local Government Area of Rivers State, Osinbajo lamented that the flood caused unimaginable destruction in the Orashi region but said government was poised to ensure the proper resettlement of the victims.

“We over flew the whole of Ahoada West and we saw so much of the damage and disaster. Most homes, most of the villages are under water and it is very clear this is a disaster of enormous proportions,” he lamented.

He said he had to visit the area, with the Minister of Environment and the Director General of NEMA, to assess the damage and to understand the nature and enormity of the disaster so that the Federal Government can react appropriately.

He commended the Rivers State Government and NEMA for their efforts in addressing the needs of the victims but said there was still need for immediate intervention.

He also said government would seek ways of checking the perennial flooding in the areas.