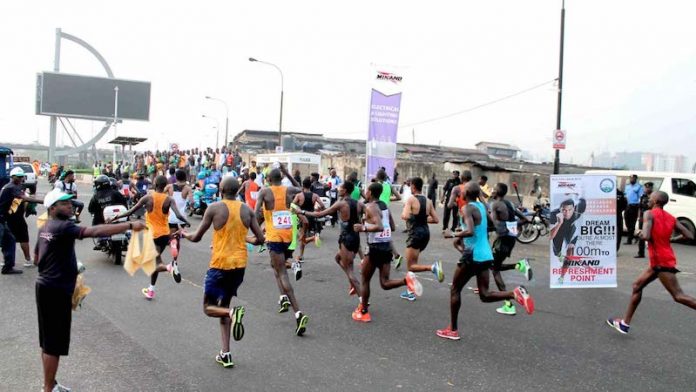 No fewer than 150,000 athletes both locally and internationally are expected to participate in the 4th edition of Access Bank Lagos City Marathon, Lagos State Governor, Mr Akinwunmi Ambode announced yesterday.

Addressing a press conference at Lagos House in Alausa, Ikeja to officially announce commencement of preparations for the marathon which is billed to hold on February 2, 2019, Ambode said the target of the state government, was to use the forthcoming edition to take the tournament from the bronze label of International Association of Athletics Federation (IAAF) to silver, in partnership with the sponsors.

According to him, “The whole idea is to turn the competition from bronze to silver level. In the last three editions, we had between 100,000 and 120,000 participants. This time around, we want to make sure that come February 2019, we would have not less than 150,000 participants.

“The reason why we want to take it to that level is to create a new record and create a new platform to allow the 2019 edition to herald what is going to happen in the next six years. We believe strongly that in another six years when we are marking the 10th anniversary, we should actually become a top class marathon, and that is our vision for this competition.

“We believe that it is achievable. This is not necessarily about me; it is not even about the sponsors but about making Lagos to be on that top brand across the world and that is how cities are elevated to become global brand,” Governor Ambode said.

He said arrangement had equally been firmed up to encourage more local participation, as well as more physically-challenged athletes, a development he said necessitated the increase in prize monies for the two categories.

“We think obviously that we should pay more attention to our physically-challenged athletes this time around and also to embrace more of local participation. This time around, we would push more money to the local races and we would push more money to also our physically-challenged athletes to encourage more people to come in, while the main prize remain the same,” he said.

Speaking further at the media briefing which was attended by Nigeria’s sports icons including Mary Onyali, Samson Siasia, Waidi Akanni, Seye Ogunlewe, among others, the Governor said the idea of the marathon was part of his administration’s initiatives to use sports, entertainment and hospitality to grow the economy and positively engage the bourgeoning youth population in the State.

Besides, the Governor commended all the sponsors, media and all those who have contributed to the success of the marathon in the last three years, saying the development was a dream come true.

Earlier in his welcome address, Chairman of Lagos State Sports Commission, Dr. Kweku Tandor said the Lagos City Marathon, was the third of its kind after Brighton and Bournemouth Marathon in the United Kingdom to earn the prestigious IAAF Bronze Label only after its second edition, which held on February 10, 2018.

On his part, Managing Director of Access Bank, Mr. Herbert Wigwe said the commitment of the state government under the leadership of Governor Ambode has ensured that the Lagos Marathon had become an annual event on the international athletics map.

He assured that Access Bank, the major sponsors of the Lagos Marathon would continue to give its full support to the event, adding that the 2019 edition will take the event a notch higher so as to receive an IAAF Silver Label for the marathon.