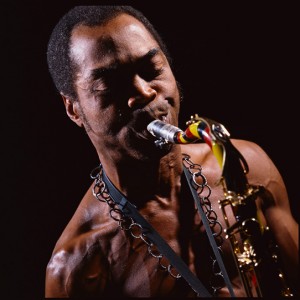 The coming week is the 21st annual binge celebrating the life, struggles, music and mission of Afrobeat cognoscenti and authentic African icon, Fela Anikulapo Kuti…it I, of course, called “Felabration”. Not to be left out, here is my tribute (penned hours after his tumultuous lying-in-state and burial) to the man who took music beyond the realm of its creation… a prickly necklace on the necks of African mindless dictators and military insurrectionists!

“He was not immodest; he just had to say it as he felt it. You might wish to block your ears to escape the predilection of the weak-hearted. Even before death destroyed, when the mere thought of the great passage claimed the sanity of less endowed men; one of the world’s most illustrious beings, Olufela AnikuIapo Kuti challenged death. He chose a name, the established idiom of primary human inter-relationship; and told the world in clear terms what his name stood for: “He who emanates greatness (Fela), who has control over death (Anikulapo) and who cannot be killed by man (Kuti)”.

Those who love Fela will spend precious moments eulogizing his irrepressible courage in the face of official braggadocio, his unbelievable stamina in spite of cold and barbaric attacks from soulless soldiers; his irreverent disparagement of religious pretences which have turned the souls of Nigerians to helpless sponge of unpredictability. They go on and on about the pungency of his lyrics; the asceticism of his ‘yabis’; the finesse of his masterful compositions, the surrealism of his arcane religious beliefs.

And that is not all of Fela. Because he is a living being, a particularly assertive, domineering and unabashedly principled being; he has a legion of detractors, professional opponents and sworn enemies – only surpassed by his legion of fans and millions of silent ‘envious’ admirers.

Therefore, it will not be a strange occurrence, even if the conclusion is strange, to “see” the other picture of Fela which his avowed ‘opponents’ would paint. To them, he is incurably addictive to contraband substances of all sorts. His commune and music provoke unnecessary rebellion and waywardness in ordinarily obedient and normal young souls. His courage and logic are misplaced, misapplied and misinformed; that confrontations with higher authorities, in spite of the latter’s corrosive corruption, have been divinely discountenanced by the holy books. So who is a man to challenge such entities?

That Fela is paganistic and a consummate atavist whose grating realism has been deactivated by an undue exposure to evil doctrines and occultic societies. They can go on and on vouching for the sanctity of their beliefs.

But the two camps will be compelled to arrive at a joint decision – that FELA is Africa’s most colourful artiste. That Fela is the voice of the oppressed: chanting, ranting, grumbling and forever carpeting the incredible excesses and corruption of Africa’s depraved leadership. All the big, mean rulers got the flip of his tongue: Bedel Bokassa, Mobutu Sese Seko, Said Barre, Olusegun Obasanjo, Yakubu Gowon, Idi Amin, etc.

Today (August 12, 1997), as Fela is buried, Nigeria will tremble – sorrow, tears and blood will flow. It will be in character. As Fela himself reminded us: that is the “regular trademark” of the African situation –  especially the Nigerian environment. Nigerians, who grunted and dallied to honour their own son, while the world poured encomiums and love on him when alive, will today shed crocodile tears of immeasurable affection. The media, even those who could not stand Fela’s abrasive outspokenness, would write their fingers white with layers and pages of empty eulogies and profane celebration.

Even the (military) government, a past-master of uncoordinated state burials, will suck the glowing drops of international exposure today’s burial of Africa’s creative magnum opus will attract. But this is the same government which hastened his death, which destroyed his wealth, which antagonized his ideas and almost vanquished his soul.

And the uncontrollable flow of the down-trodden, the trodden and the untrod would mill around the Tafawa Balewa Square, venue of the lying-in-state, moaning, crying, postulating, lamenting and virtually crippling the roads and soul of Lagos. Yet, these are the same souls Fela had battled to infiltrate and activate, to become conscious and committed so they could lift his crusade beyond lyricism to street activism. The people failed Fela, bowing to the greater fear of pain, loss, poverty and imprisonment.

In envy at Fela’s courage and vision, and their embarrassing lack of such, the people gaped at Fela’s tribulations on their behalf; sneered at Fela’s antics and vituperations; chuckled at Fela’s yabis and reformative anecdotes – but they lost him.

Fela struggled to bring himself and his vision down to the level of the ordinary Africans; to be able to motivate them and thus recreate a continent of progressive malcontents. But his people refused to follow his lead; they ran into the safety of career building and property acquisition. They vanished into the semi-darkness of religious “salvation” – surrendering their tomorrow to no one in particular.

Even the few that heeded, were booed, stigmatized and ostracized. In no time, the focus changed for the strong breed: they were forced to redirect their rebellion. The emerging malcontents were pushed to a revivalist vision: to confront societal norms and obeisance; instead of converging into a force powerful enough to change society, change governments and their irresponsibility.

Fela’s message got lost, and trivialities were elevated to diffuse his impact and crusade. Thick hairs were planted in the earlobes of young souls. Priorities were misplaced or lost entirely; force replaced logic with barbarism. Even Nigerian musicians did not understand the equation of Fela’s essence. For two or three years, the umbrella body of the musicians, Performing Musicians Employers Association of Nigeria (FMEAN) cajoled, begged and hassled Fela to attend their Nigerian Music Awards (NMA) to receive, in person, his Afrobeat Music Award! Of course, he refused and lambasted them.

Unfortunately, it never occurred to them then, that Fela that was so well-loved and admired all over Europe and the Americas, deserved much more than a miserly award in a category of music genre he single-handedly created! What is the pungency or relevance of Mariam Makeba, Hugh Masekela and, even Manu Debango, to their national ideals? They all fled their broiling countries, throwing jibes and glove-laced punches at the terrors at home from the safety of distances. Fela confronted the ogres at his own backyard – and withstood the consequences – for 25 years!!!

Today, Fela is buried. Tomorrow, his children will start the unofficial mourning. But forever, his legend, myth and music will flow and flourish.”