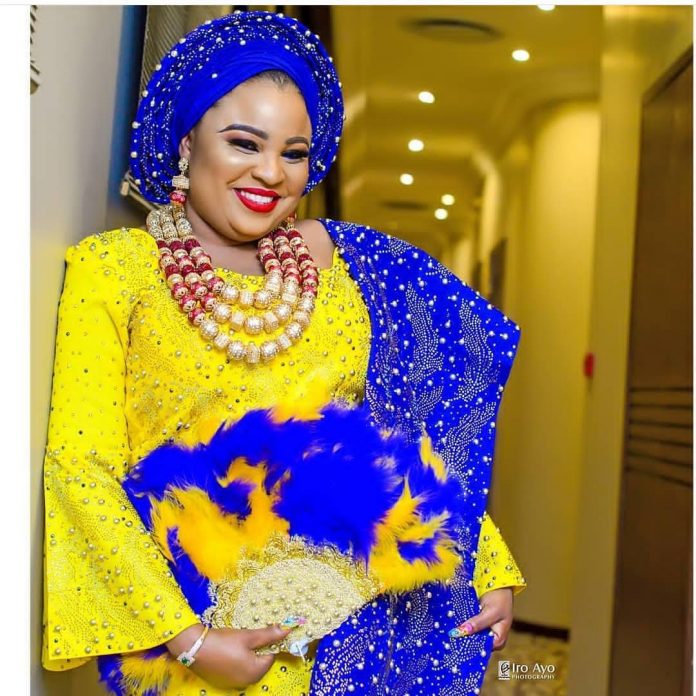 Yoruba movie actress, Abimbola Ogunnowo has been a key player in the movie scene with several films to her credit. She has an evergreen career and a cosmetics business, among others. She talks to Tosin Clegg about her love with movie director, Okiki Afolayan, how it all started, lessons with love and a lot more

The journey started 11 years ago

It was on the set of my debut movie titled ‘Ifejafunmi’ at Classic Hotel, Ijebu Ode, Ogun State. When I got to the hotel, I had long braids on me, and everyone was wondering what type of hairstyle I had on? They wanted to know if I had seen Okiki? I was kind of confused because I didn’t know who Okiki was and why everyone was calling his name. When Okiki eventually came out, he asked me to remove the braids or find a solution to it before I could come on set. He left and I was of the opinion that I didn’t know this guy, so why would he tell me to remove my hair. He later came to me to explain why. He said I couldn’t use one look for the whole movie, so I needed to work around it, which I eventually did. So, that was how I met him.

Eleven years ago, he wasn’t a director but a continuity manager

At that time, he was like the heart of a production, and he still is right now the heart of movie productions because if you have to change a story, add to it or remove from it, you have to go by him. I actually thought he hated me at first, just because of the way he dropped the heat on me. I later realised that he was doing his job, he didn’t hate me.

I didn’t feel anything. Funny enough, he was the first person to check on me the second day, asking if I had eaten. Hope yesterday’s job wasn’t that stressful. Seeing someone for the first time and he started picking on you takes you aback, but we just had to move on. Naturally, I am a very pleasant person. When I meet people for the first time, I don’t form an opinion about them because I don’t know what you have in you. I don’t know what you’d gone through that day before meeting me. But that was my first appearance on the screen. He was giving me tutorial on how to act because he wasn’t pleased with the way I acted the first day. After that day, the rest is now history, as it’s said.

I only reckon with people based on their character

If you do something to me repeatedly, then it tells me your real character. Like the popular saying “first impression lasts longer”, I don’t believe in that ideology. People can be very terrible the first time you meet them but this doesn’t mean because you don’t know what he/she had gone through before you met them. I don’t judge by that, you need to do the same thing twice or thrice before I’ll make my judgement.

Relationships work out mostly because of our head not our heart

It works out because of our emotional maturity, empathetic intelligence and self-discipline. Time will come when you’ll see more beautiful, handsome, romantic, intelligent, sexy, rich, curvy and God-fearing people than the one you’re in a relationship with. At a time like this, love will not help you; self-control will help you, emotional intelligence will come to your rescue and commitment will keep you going. With those characteristics, no matter what you feel for someone else, the person you’re committed to will rank first in your life.

How the love affair set in

As I said, we became friends and he has been my best friend in the industry. After the movie thing, we were friends for three years before we started dating. He has a lot of things on him.

He is a director, story writer and a producer. At some point, we broke up and that was when I told him that I was going back to school. Then, he was living at Agbede in Ikorodu and shuttling between that place and Ibadan wasn’t easy for me, we had to fall apart. Then, he was working with AK Media as their continuity man and we didn’t have time for ourselves. I had to stay back at the University of Ibadan for my Diploma. After my school, we had already broken up.

Getting along with him

We dated for a year and a half. We broke up for about three years and some months. A friend of mine, Tunde Anjola later called me for a job around Magodo area of Lagos State, where Afeez Owo was directing, and Okiki saw me again. He said this babe, where have you been all these while, we got talking, he invited me for a chat and I was with him the following day and we decided to reunite, the rest is now history, we are now Mr. and Mrs. Afolayan.

The story is that, we are not just together because we are dating. What we have together is friendship. It is based on this he is my friend, someone I can confide in. We are friends and it was so easy for us to come back, nothing changed about the way we were. From the long talks, I began to say this guy has not really changed, likewise me. He is someone who always wants to make you happy. I thought I should give him another chance and here we are now.

He has so many qualities that make him different from others

He can do anything just to make people around him better. He is so supportive. I am a very industrious person and I am a true lover. As long as you are contented with a particular person, why not do the right thing on time and go with him or her? That was why I chose my husband above any other man. I am contented with his kind of person. He is one guy that, when I am with him, the whole world is fulfilled, I am fulfilled.

Dealing with his excesses

I have been coping with that for 11 years, so there is no big deal about that. I am used to it. I know him too well.

He is somebody who gets tired of things so easily. You can’t get his attention on the phone for five minutes, he is done with you. He is always on the move working, but the truth of the matter is that when you are with a right person, you will not get tired of him, no matter what. I am so sure that he is going to be a good husband and a good father.

I love her heart, and she is just like my mother. I know what it means for you to have a child and take good care of him/her. His mum is so amazing. I so much love her because she is the one who calls me every day to pray for me. I don’t think I will ever have any problem with her.