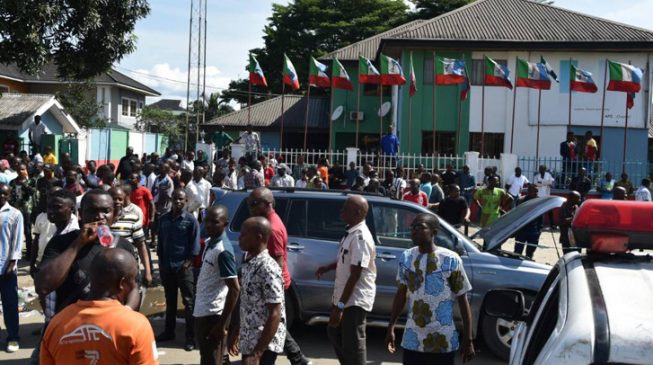 Tension is mounting within the ranks of the All Progressives Congress (APC) in Niger State over the reported re-substitution of the National Assembly list from the three senatorial zones of the state.

Some youths from the three zones yesterday protested the alleged action of the National Working Committee (NWC) of the party on the issue.

The development is coming on the heels of the deadline given by the Independent National Electoral Commission (INEC) on the submission of names of candidates for next year’s general election.

In the primary election held last week, all the three serving senators from the state lost to new comers, but the federal lawmakers cried foul and protested to Abuja where the list was reported to have been changed.

One of the protesters, Malam Mohammed Alhassan, said they would not allow the mandate given to the candidates  to be stolen from them.

According to him, “We know those we voted. The National Working Committee (NWC) does not have the right to change our decision; this is impunity that we complained about in the Peoples Democratic Party (PDP) before we left the party.

“We know what to do and the party will see our true colour in the election proper.”

His position was reechoed by speakers from the three other zones during the protest.

Musa Ibn Mohammed, a chieftain of the party, specifically stated that “any attempt to turn the result of popular will of the people will be catastrophic  for the party in the state by 2019.”

In the primary election for Niger East, Mohammed Sani Musa was declared the winner in the result announced by the returning officer, Alhaji  Saidu Akawu, at the party’s secretariat last Thursday.

In Niger South the incumbent Mustapha Sani came out fourth as he polled 1, 824 while the winner, Alhaji Mohammed Bima Enagi got 24,415. In Niger North, the Senate spokesman, Senator Sabi Abdullahi, came third with 3, 481 to the winner, Alhaji Haliru  Zakari Jikantoro, who polled 23,618 votes.