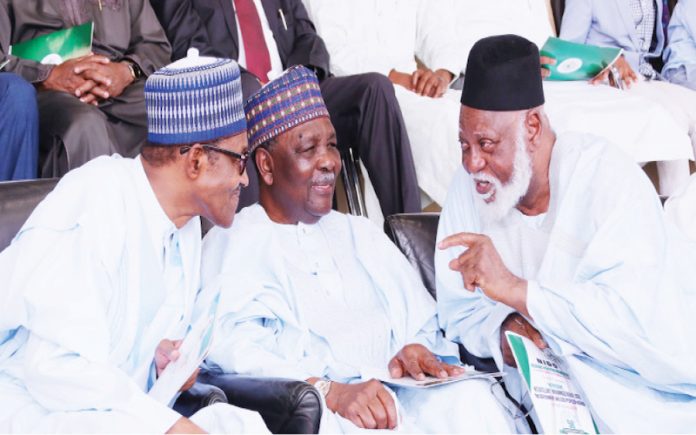 The relationship gap between the presidency and the leadership of the National Assembly was pronounced at this year’s Independence Day anniversary celebrations, writes Olaseni Durojaiye

It is trite to reiterate that one of the factors that has bogged down Nigeria as a social unit is lack of patriotic leadership, compounded by poor followership. Indeed the country is in dire need of genuine statesmen and the want of it has continually retarded its growth and development at all levels.

The importance of the role of statesman in the quest for good leadership is not quantifiable. The late South African leader, Dr. Nelson Mandela, demonstrated some of the finest characters of a statesman and patriotic leader, when he guided South Africa from a racially divided apartheid enclave to becoming a rainbow nation.

Rather than seek vengeance and revenge for the apartheid era, which inflicted ills on the black people and some colour nationals, he towed the path of true and holistic reconciliation and healed the nation of its many wounds.

Such a leadership disposition fetched him accolades and respects from within South Africa’s multi-ethnic black people and people of good conscience across the globe. That is the mark of true leadership, which also explains why his legacy continues to endure.

Unfortunately, Nigeria continues to grope in search of same. Rather, the country appears cursed with political elite that see everything from the prism of personal interest, and sometimes, from parochial and ethno-centric considerations. It has never been anything near altruistic or nationalistic underpinnings.

That is one of the silent takeaways from the 58th Independence celebrations that held on Monday, with the absence of the Senate President, Dr. Bukola Saraki and Speaker of the House of Representatives, Hon. Yakubu Dogara at the Eagle Square venue of the event.
Nigeria’s 58th Independence Day anniversary celebration was nostalgic in a way. It returned to how it used to be: open air, elaborate and colourful. It was the first open air celebration since the 2010 edition, which was marred by bomb blasts allegedly masterminded by members of the Movement for the Emancipation of the Niger Delta (MEND). Until this year’s edition, all other such celebrations had held at the forecourt of the Presidential Villa, Abuja.

The absence of Saraki and Dogara recalls the defection of the two from the ruling All Progressives Congress (APC) weeks back. Since the defections, the two leaders of the legislative arm of government and President Muhammadu Buhari have had a cat and mouse relationship due to their political differences.

Before the trio fell out, both Saraki and Dogara, upon assuming their present offices, had attended similar celebrations, leading political observers to conclude that their absence was not unconnected to the political disagreements between them.

One would have expected that the trio would set aside their differences, suspend their political feud, at least in the interest of the nation. It is unthinkable that the President of the United States would host a Fourth July celebrations and president of the United States Senate and the House Speaker would stay away for whatever reasons other than unavoidable indisposition.

Analysts contended that the trio deserves some flak. When will the nation’s political leaders rise above petty politicking and ascend to a level, where their actions and decisions on state matters are founded purely on altruistic and nationalistic reasoning.
How would it have been had the Chief Justice of Nigeria, Honourable Justice Walter Onnoghen shunned the anniversary celebration, perhaps, because he was displeased with the Presidency as a result of the onslaught on some high ranking justices?

Although Saraki appeared to have a better understanding of the import of their actions hence to douse any misgivings and conspiracy theorists, his Special Adviser on Media and Publicity, Yusuph Olaniyonu, explained that he had other important political engagements to attend to.

According to him, “The Senate President and a frontline presidential aspirant on the platform of the PDP is currently not in Abuja. He is at the moment in his home state, Kwara. The governorship primary is holding today (on Monday) in Kwara and he must be present and after that, he will be holding a meeting with Kogi State delegates to the PDP National Convention. These are two very important assignments that require his attention,” he reportedly told the media. On the part of Dogara, his spokesman, Turaki Hassan said he was unaware if his boss was invited to the event or why he absented himself. “Actually I am out of Abuja and I don’t know what is happening there,” he had said.

Many analysts and political observers insisted both reasons do not add up and called for a more nationalistic approach to state issues in future from all the parties, including the presidency.
However, President Buhari deserves more of the blame. Some observers reasoned that the president couldn’t have forced the duo to attend the event against their wishes. True. But the flip side is, with the right leadership approach and political will from the president, he could have still got them to attend, and heavens would not fall.

Rather, it would have saved the nation the negative perception the international community drew from their absence and further denting his reputation as lacking the requisite statesman leadership skills that many credited him with going into the 2015 election.
Going forward, President Buhari must act like the father to all. Irrespective of political differences, ethnicity or religious inclinations, the president, as the father and leader of the nation must shun interest peddlers, place national interest and unity above all other considerations. He must show true leadership devoid of party interests in matters of state and the advancement of good governance – the type that makes the world to continue to revere Mandela, even in death.