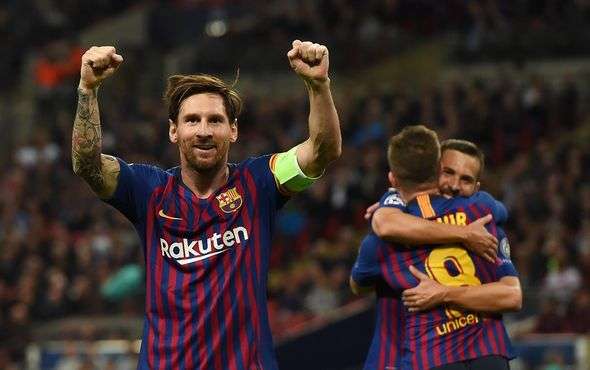 While the world press is still celebrating the five-star performance of Lionel Messi on Match Day-two of UEFA Champions League on Wednesday night in London, the Argentine great has revealed that his match against Nigeria in the final of 2008 Olympic Games in Beijing 10 years ago remained one of his best nights in n

The Argentine great was in superb form as he captained FC Barcelona to 4-2 win away to Tottenham Hotspur at Wembley stadium  where he scored two and provided the other two to give the Spanish side perfect outing so far in the competition.

In an interview recently with FourFourTwo magazine the Five-time World footballer of the year revealed his 14 most memorable matches and named the lone goal win of Argentina against Samson Siasia tutored side in Beijing as one of his major in his glorious career.

“The encounter against Nigeria at the Olympics final is one my never-to-be-forgotten matches,” he remarked.

He has featured in six matches across different classifications with Nigeria, ranging from U-20 to Olympics, World Cup and friendly matches.

He however picked the August 23, 2008 game which was the final match of the Beijing 2008 Olympics football tournament final match as one of his most memorable matches till date.

Messi told his interviewer, Andy Mitten that: “to be truthful, the trip to Beijing is one of the most beautiful memories in my career.

“The Olympics are very important, not only for the opportunity to win a medal for your country, but also the experience of being able to take part in an amazing global event and live in the Olympic village with athletes from so many different sports.’

‘It was incredible – a complete tournament for us. Yes, we won the semi-final 3-0 against Brazil – a great team who were also playing well – but we also overcame the Netherlands and Nigeria. Both were very hard games and we had to be at our best to win,” he recalled.

After a goalless first half and midway into the second stanza, Messi gave a through pass to Angel Di Maria who scored with his trade mark lob over Nigerian goalie, Ambrose Vanzekin for the only goal of the match.

Apart from that match, Messi listed others such as as his first-team debut, the most famous Classico matches at the Bernabeu stadium, several finals and, of course, the historical 7-1 demolition of Bayer Leverkusen in the 2012 UCL Round of 16.