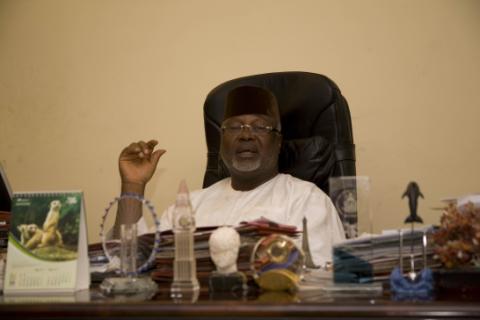 The primaries which started on Wednesday, ended on Thursday in Otukpo, the headquarters of the senatorial zone.

The returning officer for the primaries, Alhaji Abubakar Maru, who announced the results, said Lawani polled a total of 1,321 votes to defeat his closest rival Daniel Onjeh, who scored a total of 1,059 votes, while Dr Andrew Egboja polled 21 votes.

Onjeh hails from the same Ogbadibo Local Government Area of the state as Lawani.

With the victory, Lawani will now slug it out with whoever emerges the PDP candidate from the yet-to-be-conduct PDP primaries for the zone.

Meanwhile, the Peoples Democratic Party (PDP) primaries for Benue South Senatorial District, which could not hold previously due to unresolved issues, was held yesterday in Makurdi amidst tight security.

Delegates from the nine LGAs making up the district reconvened at the Aper Aku Stadium, Makurdi to pick candidates for the National Assembly, as well as state assembly seats